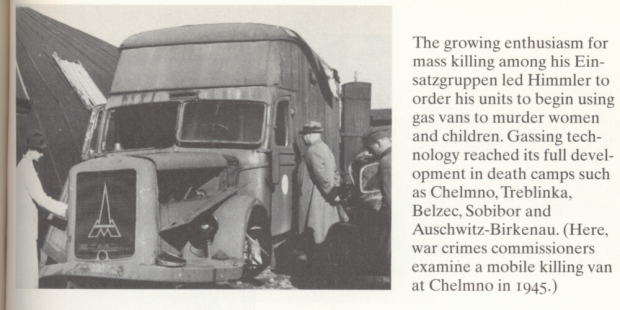 The Nazis began experimenting with poison gas for the purpose of mass murder in late 1939 with the killing of mental patients (“euthanasia”). A Nazi euphemism, “euthanasia” referred to the systematic killing of those Germans whom the Nazis deemed “unworthy of life” because of mental illness or physical disability.

One of several methods used was the gas van. Such vans were first deployed in 1940 in “Euthanasia” operations. Hitler delegated the “Euthanasia” operation to Reichsleiter Philip Bouhler, Dr. Karl Brandt, and several doctors of their choice. The targets were several German population groups: the mentally ill or retarded, the chronically ill, and criminals. At first, the murders were carried out in fixed, sealed chambers, into which carbon monoxide gas was pumped from metal canisters. In addition, some were killed by lethal injections and by shooting. Gas vans were first used in 1940, when Polish mentally ill children were locked in a sealed van and killed by carbon monoxide.

However the Gas van was not a Nazi but a Soviet invention.

The gas van was invented in the Soviet Union in 1936, by Isay Berg, the head of the administrative and economic department of the NKVD of Moscow Oblast which suffocated batches of prisoners with engine fumes in a camouflaged bread van while on the drive out to the mass graves at Butovo, where the prisoners were subsequently buried. According to Aleksandr Solzhenitsyn,

I. D. Berg was ordered to carry out the decisions of the NKVD troika of Moscow Oblast, and Berg was decently carrying out this assignment: he was driving people to the executions by shooting. But, when in Moscow Oblast there came to be three troikas having their sessions simultaneously, the executioners could not cope with the load. They hit upon a solution: to strip the victims naked, to tie them up, plug their mouths and throw them into a closed truck, disguised from the outside as a bread van. During transportation the fuel gases went into the truck, and when delivered to the farthest [execution] ditch the arrestees were already dead.”Note: Berg denied that he was the inventor of the gas van

During trips to Russia in 1941, Reichsführer-SS Heinrich Himmler learned the psychological impact of shooting women and children on the Einsatzgruppen. Hence, he commissioned Arthur Nebe to explore ways of killing that were less stressful for the task forces.

Nebe’s experiments eventually led to the utilization of the gas van. This type of vehicle had already been used in 1940 for the gassing of East Prussian and Pomeranian mental patients in Soldau, a camp located in the former Polish corridor. Another source states that the vans were first tested on Soviet prisoners in Sachsenhausen.

One application of the Nazis’ gas van became known in 1943 after the trial of members of crimes against humanity committed in the territory of the Krasnodar Territory of the USSR, where about 7,000 civilians were killed by gas poisoning. It was a vehicle with an airtight compartment for victims, into which exhaust gas was piped in while the engine was running. As a result, the victims were gassed with carbon monoxide, resulting in death by the combined effects of carbon monoxide poisoning and suffocation. The suffocations usually occurred as the gas van was carrying the victims to a freshly dug pit or ravine for mass burial. 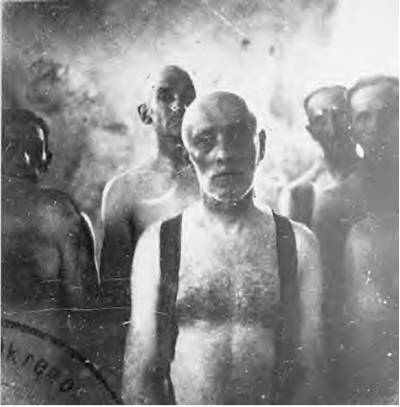 where Gustav Laabs was one of the operators until gas chambers were developed as a more efficient method for killing large numbers of people.

There were two types of gas vans in operation, used by the Einsatzgruppen in the East. The Opel-Blitz, weighing 3.5 tons, and the larger Saurerwagen, weighing 7 tonnes.I

The use of gas vans had two disadvantages:

By June 1942 the main producer of gas vans, Gaubschat Fahrzeugwerke GmbH, had delivered 20 gas vans in two models (for 30–50 and 70–100 individuals) to Einsatzgruppen units, out of 30 ordered. The photo on top of this article is from a Magirus Deutz vehicle with the nick name ‘Black Raven’. However the photo is controversial as no positively identified gas vans show up in the photographic record of Nazi war crimes. It is speculated that the photo shows the gas van after re-conversion to hide war crime activities.

Below are Excerpts of letter from Willy Just to SS-Obersturmbannfuehrer Walter Rauff, 5 June 1942

“RE: Technical alterations to the special vehicles already in operation and those in production. 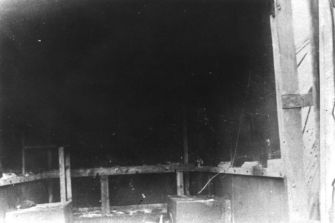 Since December 1941, for example, 97,000 have been processed using three vans without any faults developing in the vehicles. The well-known explosion in Kulmhof (Chelmno) must be treated as a special case. It was caused by faulty practice. Special instructions have been given to the relevant offices in order to avoid such accidents. The instructions were such as to ensure a considerable increase in the degree of security.

2) The vans are normally loaded with 9-10 people per square meter. With the large Saurer special vans this is not possible because although they do not become overloaded their maneuverability is much impaired. A reduction in the load area appears desirable. It can be achieved by reducing the size of the van by c. 1 meter. The difficulty referred to cannot be overcome by reducing the size of the load. For a reduction in the numbers will necessitate a longer period of operation because the free spaces will have to be filled with CO. By contrast, a smaller load area which is completely full requires a much sorter period of operation since there are no free spaces…..

3) The connecting hoses between the exhaust and the van frequently rust through because they are corroded inside by the liquids which fall on them. To prevent this the connecting piece must be moved so that the gas is fed from the top downwards. This will prevent liquids flowing in…..

6) The lighting must be better protected against damage than hitherto….It has been suggested that lighting should be dispensed with since they are allegedly never used. However, experience shows that when the rear door is closed and therefore when it becomes dark, the cargo presses hard towards the door….It makes it difficult to latch the door. Furthermore, it has been observed that the noise always begins when the doors are shut presumably because of fear brought on by the darkness..”

Although no operating vans had been recovered after the war, there are several eye witness account and also the above letters provide sufficient evidence.