Charles Herbert Lightoller (30 March 1874 – 8 December 1952) was the second mate (second officer) on board the RMS Titanic and the most senior officer to survive the Titanic disaster.

As an officer in charge of loading passengers into lifeboats, Lightoller not only enforced with utmost strictness the “women and children first” protocol; he also effectively extended it to mean “women and children only”. In pursuance of this principle, Lightoller lowered lifeboats with empty seats if there were no women or children waiting to board.Indeed, Lightoller is known to have permitted exactly one adult male passenger to board a lifeboat, namely Arthur Godfrey Peuchen, who was permitted to board a lifeboat (no.6) that was otherwise full of women, because he had sailing experience and could help navigate the boat. Lightoller stayed until the last, was sucked against a grate and held until he was under water, but then was blown from the grate from a rush of warm air as a boiler exploded. He clung to a capsized collapsible boat with 30 others until their rescue.

Lightoller served as an officer of the Royal Navy during the First World War. Despite his involvement in the alleged massacre of shipwrecked German sailors, he was decorated for gallantry.

On August 4th 1914, the Great War began and the R.M.S. Oceanic became H.M.S.Oceanic, armed merchant cruiser, while First Officer Lightoller of White Star Lines became Lieutenant Lightoller of the Royal Navy. Oceanic had two captains, a Royal Navy skipper, Captain William Slayter, and Captain Henry Smith, who had been the commander of the Oceanic for the last two years. 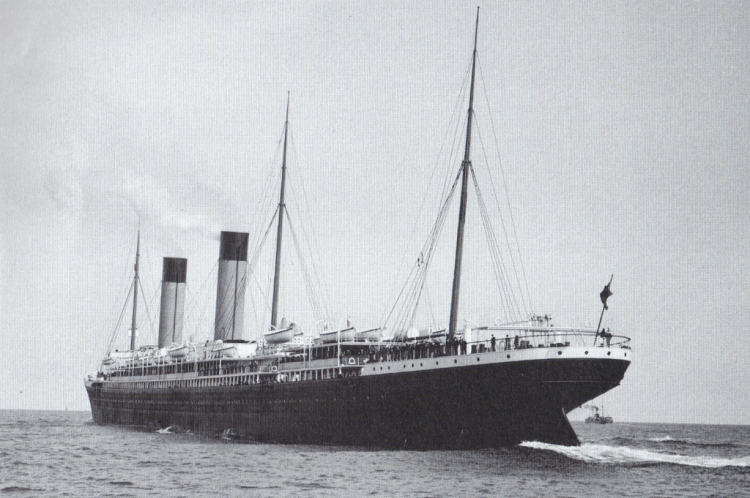 Just before Christmas 1915 Lightoller got his own command, the torpedo boat HMTB 117. During his tour with this boat, on 31 July 1916, Lightoller attacked the Zeppelin L31 with the ships Hotchkiss guns. For his actions Lightoller was awarded the Distinguished Service Cross and he was also promoted to commander of the torpedo-boat-destroyer Falcon.

On 1 April 1918, Lightoller was again off watch, laying in his bunk, when the Falcon collided with the trawler John Fitzgerald. She stayed afloat for a few hours, eventually sinking just about same time, six years to the day as the Titanic sinking.

Lightoller was now given a new command, the destroyer Garry. On 19 July 1918, they rammed and sank the German submarine UB-110.

The ramming damaged the bows of the Garry so badly that she had to steam 100 miles in reverse to relieve the strain on the forward bulkheads as she returned to port for repairs. For this action Lightoller was awarded a bar to his DSC and promoted to Lieutenant-Commander.

In his 1933 memoirs, Kapitän leutnant Fürbringer ,the Captain of the UB-110 accused Lightoller of hoving to and ordering his crew to open fire on the unarmed survivors of UB-110 with revolvers and machine guns. During the ensuing massacre, Fürbringer watched the skull of an 18-year old member of his crew being split open by a lump of coal hurled by a Royal Navy sailor. When Fürbringer attempted to help a wounded officer to swim, he was told, “Let me die in peace. The swine are going to murder us anyhow.” The shooting only ceased when the convoy the Garry had been escorting, which contained many neutral-flagged ships, arrived on the scene. Fürbringer later recalled, “As if by magic the British now let down some life boats into the water.”

In 1929, Lightoller had purchased a discarded Admiralty steam launch, built in 1912 by G. Cooper at Conyer. She was 52 feet long by 12,2 feet wide, powered by a petrol-paraffin Parsons 60 hp. Commander Lightoller had her refitted and lengthened to 58 feet, converting her into a 62 hp Glennifer diesel motor yacht that was christened Sundowner by Sylvia,Lightoller’s wife. Throughout the thirties she was used by the Lightoller family mainly for trips around England and Europe. In July 1939, Lightoller was approached by the Royal Navy and asked to perform a survey of the German coastline. This they did under the guise of an elderly couple on vacation in their yacht. When World War II started in September 1939, the Lightollers were raising chickens in Hertfordshire. The Sundowner was kept in a yacht basin at Chiswick. 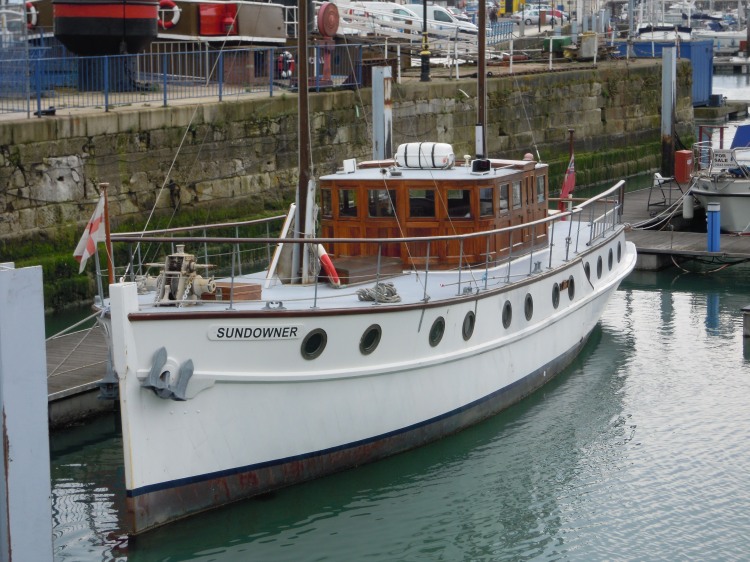 Then in the closing days of May 1940, after eight months of quiet known as the “phony war”, Britain found itself on the edge of military disaster. The German armies blitzkrieged through Holland, Belgium, Luxembourg and Northern France in just over two weeks. Allied resistance had disintegrated and almost the entire British Expeditionary Force (BEF) was penned into a tiny pocket on the French Belgian border.

On 24 May 1940, some 400,000 Allied troops lay pinned against the coast of Flanders near the French port of Dunkirk. German tanks were only ten miles away. Yet the trapped army was saved. In the next 11 days over 338,000 men were evacuated safely to England in Operation Dynamo, one of the greatest rescues of all time.

On the 1 June 1940, the 66 year old Lightoller, accompanied by his eldest son Roger and an 18 year old Sea-Scout named Gerald, took the Sundowner and sailed for Dunkirk and the trapped BEF. Although the Sundowner had never carried more than 21 persons before, they succeeded in carrying a total of 130 men from the beaches of Dunkirk. In addition to the three crew members, there were two crew members who had been rescued from another small boat, the motor cruiser Westerly. There were another three Naval Ratings also rescued from waters off Dunkirk, plus 122 troops taken from the destroyer Worchester. Despite numerous bombing and strafing runs by Luftwaffe aircraft, they all arrived safely back to Ramsgate just about 12 hours after they had departed. It is said that when one of the soldiers heard that the captain had been on the Titanic, he was tempted to jump overboard. However his mate was quick to reply that if Lightoller could survive the Titanic, he could survive anything and that was all the more reason to stay.

Following Dunkirk, Commander Lightoller joined the Home Guard, but the Royal Navy engaged him to work with the Small Vessel Pool until the end of World War II. The Lightollers youngest son, Brian, was in the RAF as a pilot. On the first night of World War II, he was killed in a bombing raid on Wilhelmshaven. Their eldest son, Roger, went on to join the Royal Navy where he commanded Motor Gun Boats. During the final months of the war, he was killed during a German Commando raid on Granville on the North French Coast

Later, in retirement, he further distinguished himself in the Second World War by providing and sailing as a volunteer on one of the “little ships”, his personal yacht that had been requisitioned by the Admiralty for wartime service, during the perilous Dunkirk evacuation.

Lightoller died of chronic heart disease on 8 December 1952, aged 78. A long-time pipe smoker, he was living in London during that city’s Great Smog of 1952 when he died.

His body was cremated, and his ashes were scattered at Mortlake Crematorium in Richmond, Surrey.

One thought on “Charles Herbert Lightoller:Titanic survivor,WWI Hero and rescuer in Dunkirk.”