Ruth Westheimer (born June 4, 1928), better known as Dr. Ruth, is an American sex therapist, media personality, and author. The New York Times described her as a “Sorbonne-trained psychologist who became a kind of cultural icon in the 1980s.… She ushered in the new age of freer, franker talk about sex on radio and television—and was endlessly parodied for her limitless enthusiasm and for having an accent only a psychologist could have.

Westheimer was born Karola Ruth Siegel in Wiesenfeld (near Karlstadt am Main), Germany, the only child of Orthodox Jews Irma (née Hanauer) and Julius Siegel. In January 1939, she was sent to Switzerland by her mother and grandmother as part of the Kindertransport after her father had been taken by the Nazis.

Her safe haven, along with that of some 100 other German-Jewish children, was made possible by Swiss activist Franzisca Goldschmidt (see 2014 event below).In Switzerland, young Karola came of age in an orphanage, and stopped receiving her parents’ letters in September 1941. In 1945, Westheimer learned that her parents had been killed in the Holocaust, possibly at the Auschwitz concentration camp.

Westheimer decided to emigrate to British-controlled Mandatory Palestine. There, at 17, she “first had sexual intercourse on a starry night, in a haystack without contraception.” She later told The New York Times that “I am not happy about that, but I know much better now and so does everyone who listens to my radio program.”Westheimer joined the Haganah in Jerusalem.

A female officer in charge of the range at the Hen women’s corps camp near Tel Aviv, Palestine, gives a demonstration in the handling of a Sten gun on June 15, 1948 in the Arab-Israeli War. Although non-combatants, members the new women’s Army in Israel are taught to use guns for defense. (AP Photo) 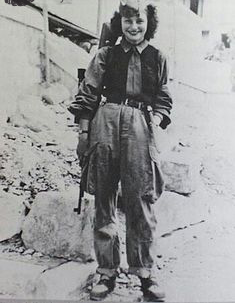 Westheimer was seriously wounded in action by an exploding shell during the Israeli War of Independence in 1948, and it was several months before she was able to walk again.

In 1950, Westheimer moved to France, where she studied and then taught psychology at the University of Paris. In 1956, she immigrated to the United States, settling in Washington Heights, Manhattan.

She still lives in the “cluttered three-bedroom apartment in Washington Heights where she raised her two children and became famous, in that order.” Because of the two synagogues she belongs to, the YMHA she was president of for three years, and a “still sizable community of German Jewish World War II refugees”, she remains in the neighborhood. She speaks English, German, French, and Hebrew.

Westheimer earned an M.A. degree in sociology from The New School in 1959 and an Ed.D. degree from Teachers College, Columbia University in 1970. She completed post-doctoral work in human sexuality at New York-Presbyterian Hospital, training with pioneer sex therapist Helen Singer Kaplan. She has written several books on human sexuality, including Dr. Ruth’s Encyclopedia of Sex and Sex for Dummies. The full version of Dr. Ruth’s Encyclopedia of Sex is currently available online.

Westheimer has given commencement speeches at the Hebrew Union College seminary, Lehman College of the City University of New York, and, in 2004, at Trinity College.

In 2008, she was awarded an Honorary Doctorate by Westfield State College. In 2002, she received the Leo Baeck Medal for her humanitarian work promoting tolerance and social justice.

Westheimer has been married three times. Her third marriage, to Manfred Westheimer, lasted until his death in 1997. She has two children, Miriam and Joel, and several grandchildren.