I absolutely love the BBC/Amazon Prime TV Drama “Ripper Street” and I think the last season was the best season so far.

I only found out recently that the main character in the show was based on the actual inspector in the Jack the Ripper case, Edmund Reid.

Detective Inspector Edmund John James Reid (21 March 1846 in Canterbury, Kent – 5 December 1917 at Herne Bay, Kent) was the head of the CID in the Metropolitan Police’s H Division at the time of the Whitechapel murders of Jack the Ripper in 1888.

Edmund Reid was born in Canterbury, Kent in 1846. Prior to joining the police he worked as a grocer’s delivery boy, a pastry-cook and a ship’s steward before joining up in 1872 (Warrant no. 56100), serving in P Division (Camberwell). At the time of his joining he was the shortest man in the police force – at 5 feet 6 inches tall. A talented police officer, within two years he was made detective, and he steadily rose up the ranks. In 1885 he was made Detective Inspector and based at Scotland Yard, before organising and heading up the CID department in newly formed J Division (Bethnal Green) in 1886. In August 1887 he received a reprimand from head of CID James Munro (for what is not known but as he did not lose rank or pay, it was probably relatively minor) but within days he had been transferred to H Division (Whitechapel) to replace Frederick Abberline (who had been transferred to Scotland Yard but would later return to head up the Whitechapel Murders investigation). 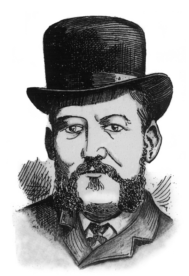 Reid was the officer in charge of the enquiries into the murders of Emma Elizabeth Smith in April 1888, and Martha Tabram in August 1888, before Inspector Frederick Abberline was sent from Scotland Yard to ‘H’ Division in Whitechapel to co-ordinate the hunt for the killer.

He organised numerous identity parades for PC Barrett and Pearly Poll at the Tower of London and Wellington Barracks and questioned soldiers picked out by them or who were absent without leave. In his report on September 24th his frustration at the pair being unable to conclusively identify a suspect is apparent when he describes their evidence as “worthless”.

Following the Elizabeth Stride murder, Reid was telegrammed at the Inspectors quarters at Commercial Street Police Station and immediately went to the murder scene at Berner Street. He monitored the searches, established a timeline of events of the body being discovered, organised house to house enquiries and ensured each person present at the scene was inspected and questioned before being allowed to leave.

At 4.30am when the body was taken from the scene he personally walked to the home of the Corner Wynne Baxter to inform him of the murder, and upon his return conducted one final futile search of the scene in daylight before ordering the blood be washed away at 5.30am. He then went to the mortuary at St George in the East to inspect the body and take a description.

Reid was also involved in the investigations of the Mary Kelly murder as he was telegrammed to attend the scene. 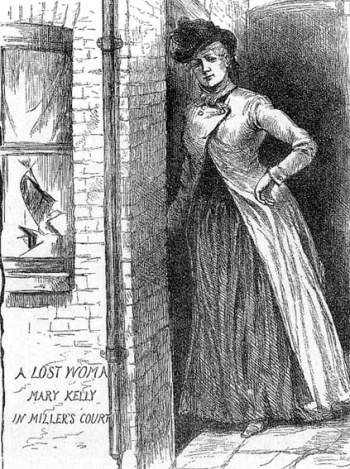 Reid would also be called to the scene and headed the investigation into the Pinchin Street Torso case and the murders of Alice McKenzie and Frances Coles, determining which areas of investigation to follow and delegating tasks to the other officers in CID.

During the time of the Whitechapel Murders, Reid was not seconded full time to the case so also had other duties (including preparing and compelling the morning report of crime in the area each day) and crimes to investigate (these included the “Great Silk Robberies” of late November 1888).

Reid’s own theory on the murders he spoke about during an interview with Lloyd’s Weekly News in 1912.

“The whole of the murders were done after the public-houses were closed; the victims were all of the same class, the lowest of the low, and living within a quarter of a mile of each other; all were murdered within half a mile area; all were killed in the same manner. That is all we know for certain. My opinion is that the perpetrator of the crimes was a man who was in the habit of using a certain public-house, and of remaining there until closing time. Leaving with the rest of the customers, with what soldiers call ‘a touch of delirium triangle,’ he would leave with one of the women. My belief is that he would in some dark corner attack her with the knife and cut her up. Having satisfied his maniacal blood-lust he would go away home, and the next day know nothing about it.”

Saying later in the same interview on claims by others that the identity of the killer was known:

“But this I will say at once. I challenge anyone to produce a tittle of evidence of any kind against anyone. The earth has been raked over and the seas have been swept, to find this criminal ‘Jack the Ripper,’ always without success. It still amuses me to read the writings of such men as Dr. Anderson, Dr. Forbes Winslow, Major Arthur Griffiths, and many others, all holding different theories, but all of them wrong. I have answered many of them in print, and would only add here that I was on the scene and ought to know.”

As well as being a talented police officer (he held 50 rewards and commendations for his duty) Reid was also an early aeronaut (making the first descent by parachute from 1000ft in 1877 in Luton, being awarded a gold medal in 1883 by the Balloon Association of Great Britain following a record-breaking ascent in the balloon “Queen of the Meadow” from The Crystal Palace and made a total of 23 ascents), a Druid of Distinction, a talented actor, singer and a master of sleight of hand. His author friend Charles Gibbon named fictional Detective Sergeant Dier after Reid by reversing his name and many of Reid’s personal characteristics are present in the character.

For the television show Ripper Street, the writers made some drastic alterations to Reid’s biography. For example, Reid and his wife Emily are together until her death in 1900. They have two children together, Elizabeth and Harold, neither of whom are lost in a boating accident on the Thames. Being a fictional representation of the detective, the television character also seems to have a drastically different personality from the historical Reid and few of the cases he investigates have any historical basis.

In 1896 he retired from the Metropolitan Police, and after a brief stint as a pub landlord for seven months he became a private detective. In 1903 he retired to Hampton-on-Sea and in characteristic eccentric Reid style named his residence “Reid’s Ranch”, painting castle battlements and cannons on the side of his home, keeping a pet parrot and decorating the interior from photographs of his London cases.

The garden contained an eccentric collection including a cannonball, a flagpole flying the Union Flag and a post from the end of the pier, and a wooden kiosk named the “Hampton-on-Sea Hotel” from where he sold soft drinks and postcards of himself to tourists. He soon became the champion of his neighbours in a campaign to save their homes from sea erosion. By 1915 he was the last remaining resident and he himself abandoned his home in 1916, moving to Herne Bay. In 1917 he remarried, but died on 5th December that year aged 71.