The Battle of Los Angeles, also known as The Great Los Angeles Air Raid, is the name given by contemporary sources to the rumored enemy attack and subsequent anti-aircraft artillery barrage which took place from late 24 February to early 25 February 1942 over Los Angeles, CaliforniaThe incident occurred less than three months after the United States entered World War II as a result of the Japanese Imperial Navy’s attack on Pearl Harbor, and one day after the bombardment of Ellwood on 23 February. Initially, the target of the aerial barrage was thought to be an attacking force from Japan, but speaking at a press conference shortly afterward, Secretary of the Navy Frank Knox called the incident a “false alarm.” Newspapers of the time published a number of reports and speculations of a cover-up. 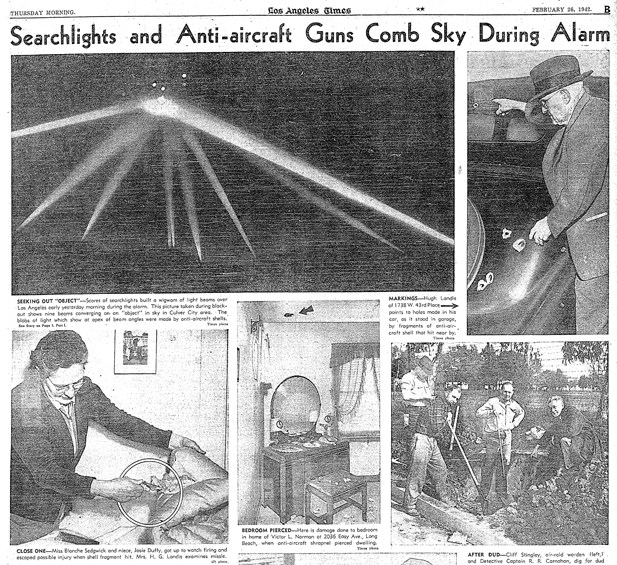 Thousands of volunteer air-raid wardens tumbled from their beds and grabbed their boots and helmets–those who had helmets — and rushed into the night. Tens of thousands of citizens, awakened by the screech of sirens and the popping of shells, jumped out of bed and, heedless of blackout regulations, began snapping on lights. It was pandemonium.

Although no bombs were dropped, the city did not escape its baptism of fire without casualties, including five fatalities. Three residents were killed in automobile accidents as cars dashed wildly about in the blackout. Two others died of heart attacks.

Several persons were injured hurrying to their various posts. A radio announcer ran into an awning and suffered a gash over one eye. A police officer kicked in the window of a lighted Hollywood store and cut his right leg.

The toll among air-raid wardens was especially high. (They were said to have acted with valor throughout.) One fell from a wall while looking into a lighted apartment and broke a leg. Another jumped a 3-foot fence to reach a lighted house and sprained an ankle. Another fell down his own front stairs and broke an arm.

There was scattered structural damage caused by antiaircraft shells that failed to explode in air but did so when they struck the ground, demolishing a garage here, a patio there, and blowing out a tire on a parked automobile.

Exultation was in the air. The city had met its first taste of war with valor. It was exhilarating. But exultation turned to embarrassment the next day when the Secretary of the Navy said there had been no air raid. No enemy planes. It was just a case of jitters.

Embarrassment turned to outrage. The army was accused of shooting up an empty sky. The sheriff was particularly embarrassed. He had valiantly helped the FBI round up several Japanese nurserymen and gardeners who were supposedly caught in the act of signaling the enemy aviators.

Within hours of the end of the air raid, Secretary of the Navy Frank Knox held a press conference, saying the entire incident was a false alarm due to anxiety and “war nerves.”

Knox’s comments were followed by statements from the Army the next day that reflected General George C. Marshall’s belief that the incident might have been caused by commercial airplanes used as a psychological warfare campaign to generate panic.

At war’s end, an Army document explained what had happened: (1) numerous weather balloons had been released over the area that night. They carried lights for tracking purposes, and these “lighted balloons” were mistaken for enemy aircraft; (2) shell bursts illuminated by searchlights were mistaken by ground crews for enemy aircraft.

The Japanese, after the war, declared that they had flown no airplanes over Los Angeles on that date. All the same, it was a glorious night.

A photo published in the Los Angeles Times on February 26, 1942, has been cited by some ufologists and conspiracy theorists as evidence of an extraterrestrial visitation. They assert that the photo clearly shows searchlights focused on an alien spaceship; however, the photo was heavily modified by photo retouching prior to publication, a routine practice in graphic arts of the time intended to improve contrast in black and white photos.

While it’s likely that the Battle of Los Angeles was only a mirage, it was still a chilling reminder of the vulnerability that many Americans felt at the beginning of World War II. The Japanese would later hatch several schemes to attack the American mainland—including launching over 9,000 explosives-laden “fire balloons”—yet none of them ever produced the level of mass hysteria that accompanied the phantom shootout over Los Angeles. Even at the time, many journalists noted that it was fitting that the incident had taken place in the home of the film industry. In an article from March 1942, the New York Times wrote that as the “world’s preeminent fabricator of make-believe,” Hollywood appeared to have played host to a battle that was “just another illusion”

2 thoughts on “The Battle of Los Angeles”