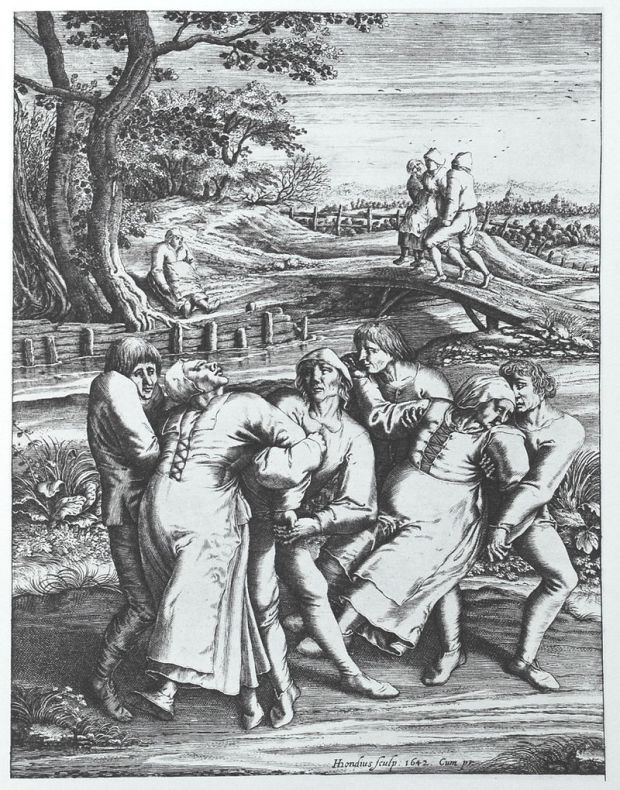 Dancing mania (also known as dancing plague, choreomania, St John’s Dance and, historically, St. Vitus’s Dance) was a social phenomenon that occurred primarily in mainland Europe between the 14th and 17th centuries. It involved groups of people dancing erratically, sometimes thousands at a time. The mania affected men, women, and children who danced until they collapsed from exhaustion. One of the first major outbreaks was in Aachen, in the Holy Roman Empire, in 1374, and it quickly spread throughout Europe; one particularly notable outbreak occurred in Strasbourg in 1518, also in the Holy Roman Empire.

The Strassbourg outbreak began in July 1518, when a woman, Mrs. Troffea, began to dance fervently in a street in Strasbourg. This lasted somewhere between four and six days. Within a week, 34 others had joined, and within a month, there were around 400 dancers, predominantly female. Some of these people eventually died from heart attacks, strokes, or exhaustion.One report indicates that for a period the plague killed around fifteen people per day.

Affecting thousands of people across several centuries, dancing mania was not an isolated event, and was well documented in contemporary reports. It was nevertheless poorly understood, and remedies were based on guesswork. Generally, musicians accompanied dancers, to help ward off the mania, but this tactic sometimes backfired by encouraging more to join in. There is no consensus among modern-day scholars as to the cause of dancing mania.

The several theories proposed range from religious cults being behind the processions to people dancing to relieve themselves of stress and put the poverty of the period out of their minds. It is, however, thought to have been a mass psychogenic illness in which the occurrence of similar physical symptoms, with no known physical cause, affect a large group of people as a form of social influence.

Modern theories include food-poisoning caused by the toxic and psychoactive chemical products of ergot fungi, which grows commonly on grains in the wheat family (such as rye).

Ergotamine is the main psychoactive product of ergot fungi, it is structurally related to the recreational drug lysergic acid diethylamide (LSD-25), and is the substance from which LSD-25 was originally synthesized. The same fungus has also been implicated in other major historical anomalies, including the Salem witch trials.