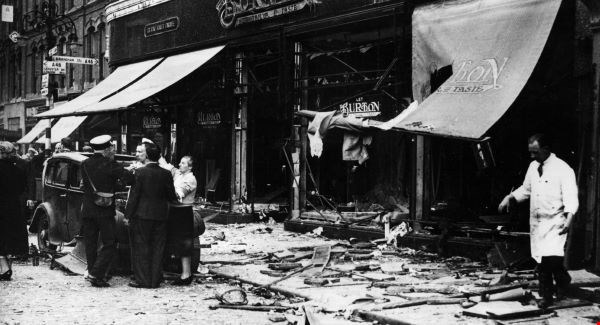 In the wider perception of European history, the late 1930s is remembered as the time when Nazi Germany began to cast its shadow over Europe leading ultimately to the most destructive conflict in history – World War II. At the same time however, old grievances were bubbling to the surface once more in Ireland and the Irish Republican Army (IRA) were about to resume their campaign to unify Ireland and expel what they saw as a British military occupation of Northern Ireland.

ON AUGUST 25, 1939, an IRA bomb killed five innocent people and wounded more than 60 others in Coventry. The dead included a 15-year-old boy and an 82- year-old man. Little over a week later, the bombing was overshadowed by the outbreak of the Second World War.

The first direct talks between the IRA and the Nazis began in 1937, when Tom Barry, the then chief-of-staff, travelled to Germany.

The legendary leader of the Cork flying columns was accompanied on his travels by a German agent, Jupp Hoven. While posing as a TCD student, Hoven undertook spying work in Belfast, Dublin and Cork. He was a close friend of Helmut Clissmann, who ran the German academic exchange service in Dublin. Both men were from Aachen and had nurtured links with the IRA in the 1930s.
Barry’s 1937 trip to the Continent was aimed at seeking German support for IRA attacks on British military installations in Northern Ireland. But at an IRA convention in April 1938, Barry’s plan was rejected in favour of more grandiose pro-German plans conceived by the new chief-of-staff, Seán Russell. The 1916 veteran had long cherished a Casement-style alliance with Germany.

In August 1938, Russell called on an old IRA comrade, James(Saemus) O’Donovan, who, since 1930, had been working as a manager at ESB headquarters in Dublin.

The IRA leader’s visit was to enlist his friend’s help in designing a bombing campaign on English soil, to be launched the following year. Russell and O’Donovan were the only two surviving members of the IRA general headquarters staff who had opposed the Anglo-Irish treaty in January 1922. Despite being on the state payroll and having a young family, O’Donovan did not hesitate to accept Russell’s call to arms. I

O’Donovan’s elder son, Donal, had misgivings about his father’s decision to re-enlist with the IRA in 1938, at the age of 41. But James O’Donovan himself never expressed any regrets about his role in the English bombing campaign, which resulted in the deaths of seven members of the public, scores of serious injuries, and the execution of two IRA volunteers in February 1940.

The S-plan kicked off with polite formality, as might be expected from an ex-pupil of the Jesuits (O’Donovan was born in Roscommon in 1896 and educated at Glasgow’s prestigious St Aloysius College). In mid-January 1939, the British foreign secretary, Lord Halifax, received an IRA letter declaring war, which began ‘Your Excellency . . .’. It was typical of O’Donovan to issue a deadly threat cloaked in formal terms.
The ultimatum gave the British government four days to withdraw troops from Northern Ireland—an impossible deadline to meet. In fact, however, the S-plan had nothing to do with forcing a British withdrawal from the North, and everything to do with attracting the attention of the Germans. Russell saw Hitler as the only European leader capable of destroying Britain. His logic was that with England on her knees, nothing could prevent a German-backed reunification of Ireland. 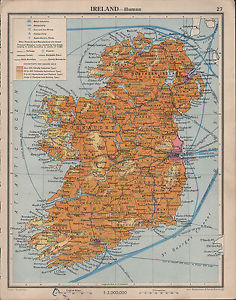 The British government refused to adhere to the demand and thus the IRA declared war on the United Kingdom on Sunday 15th January 1939. The next day, five bombs were detonated in London, Warwickshire and Newcastle-Upon-Tyne. The targets were electricity pylons and power sub-stations in an attempt to specifically harm industrial outputs in those areas. This set the tone for much of the IRA’s campaign and over the following week a significant number of targets were hit but with almost no fatalities since they were aimed at infrastructure, power and gas supplies. This was a key factor in supporting the propaganda war since large numbers of deaths might turn the all-important American support against them.

As a wave of IRA bombs exploded across English cities in  January 1939, it didn’t take the Abwehr long to act. In early February it dispatched one of its agents, Oscar Pfaus, to Dublin to meet the IRA leadership. O’Donovan recalled that on 3 February the German agent ‘met Seán Russell and myself in Pete’s [Kearney] house in Clontarf. He explained that his principals would be glad to meet a representative from us and discuss the possibility of assistance . . .’.
This was an offer the IRA leaders could not refuse.

Throughout 1939 the IRA carried out repeated attacks aimed at further undermining the British industrial complex and the British people’s confidence in their government to protect them. In July 1939, attacks were made on cinemas in London and Birmingham using tear gas bombs which although didn’t kill anyone struck fear in to the wider public that their enemy was on their own streets and walking among them. At the same time, perhaps frustrated by the lack of results thus far, the British government revealed that it had been informed that the attacks on the UK would intensify in the coming months. Not long after this, bombs were detonated at banks across London killing one person while a second was killed in a blast at King’s Cross train station a month later. The British responded with emergency powers that saw large numbers of the Irish community in Britain get deported to Southern Ireland who were themselves introducing legislation to combat the IRA. The British were also increasingly concerned about reported support for the IRA’s campaign coming from Berlin.

Then on August 25th 1939, less than a week before Hitler’s forces crossed in to Poland, a rather inconspicuous-looking bike was placed up against a wall in Broadgate, part of Coventry’s busy city centre.

The bike had a basket on the front, common for the time, with a bundle inside it. A rather frustrated man had left it there and walked away having found it difficult to take the bike across the tramlines in the area. His name was Joby O’Sullivan who came from Cork and he was the only one who knew that the bundle in the basket was in fact a bomb. He would later state that he intended to take the already armed bomb to a nearby police station but the tramlines had slowed his progress down meaning the bomb was due to detonate soon and not wanting to be a martyr he left it where it was.

At two minutes after half past two on a busy Friday afternoon, the 5lbs of explosive was detonated by an alarm clock timer. The blast shattered glass which shot out like bullets that cut down people walking by at the time.

A young shop assistant, 21-year old Elsie Answell, was killed instantly having been standing by a window near where the bomb detonated. She was due to be married in early September but ended up getting buried in the same church her service was to take place.She was only identifiable by her engagement ring.[2

In the W.H. Smiths store, 30-year old Rex Gentle who came to Coventry from North Wales for holiday work and 15-year old local boy John Arnott were also killed in the initial blast. 50-year old Gwilym Rowlands was killed while sweeping the roads for the council while the oldest victim, 82-year old James Clay, was struck down as he walked home from his regular café which he had left earlier than usual because he was feeling unwell. Another 70 people were injured many of them with severe lacerations caused by the flying glass.

The British public were outraged and the attack served to further diminish confidence in British Prime Minister Neville Chamberlain and his government who seemed impotent to stop both the IRA at home and Hitler in Eastern Europe.