Officially called the Jewish Organization for the Maintenance of Public Order (Ger., Jüdischer Ordungsdienst; Pol., Żydowska Służba Porządkowa), Jewish police units were established under Nazi occupation in most East European ghettos. The establishment of a police force usually was connected with the creation of the ghettos, which excluded the Jewish population from general police jurisdiction and thus created a need for an alternative system of ensuring that the Jewish population complied with German occupiers’ orders. The absence of a general German order regarding the establishment of the Jewish police indicates that in all probability, it was the various local occupying forces—and not the Central Reich Government—that took the initiative to set up this force. Indeed, the composition of the Jewish police in different ghettos, their jurisdictional powers, and their status within the Jewish community varied from ghetto to ghetto, according to local conditions. A small ghetto could muster only a handful of individuals to join its police force, whereas the Warsaw ghetto 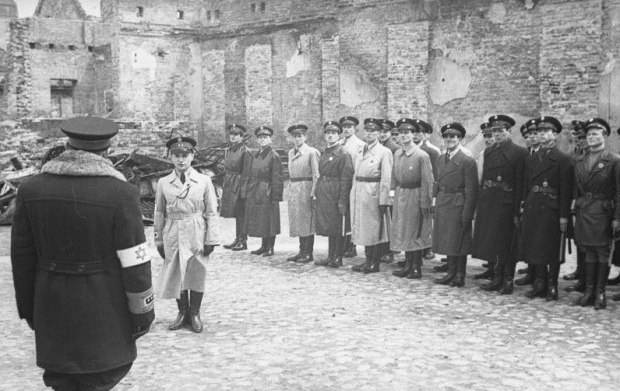 Ghetto police forces were officially branches of Judenräte (sg., Judenrat) but were also commanded directly by local non-Jewish police authorities and the SS. Therefore, police units in some ghettos became independent of the Judenräte. However, in other places the Judenrat and the ghetto police were indistinguishable. Initially, the primary task of the Jewish police was to maintain public order and to enforce German orders transmitted by the Judenräte to the Jewish population. Municipal authorities retained jurisdiction over criminal matters and disputes between Jews and non-Jews. At this phase, there were Jews who viewed the establishment of the Jewish police positively; some intellectual circles even openly supported it. Jews joined it for social motives and out of a desire to help maintain order in the ghettos and assist Jewish autonomy.

German authorities insisted that Jewish police officers be young, fit, and army-trained, with at least a high school diploma—but those principles were not always followed. Many police were refugees from other Jewish communities and few had been involved in organized Jewish affairs before the war.

Gradually the Germans expanded the workload of the Jewish police, calling upon them to fight epidemics, quell demonstrations, and fight fires. Other times the police were charged with overseeing distribution of foodstuffs and controlling prices as well as collecting taxes. They were part of the battle against those who disobeyed German orders, although the scope of their jurisdiction varied from place to place. Prisons were erected in the larger ghettos and detention rooms in the smaller ones; rarely were inmates transferred to the Germans. In most cases, ghetto police themselves carried out the punishment that ghetto courts imposed on the accused. Sometimes they even assisted in executing German-ordered death sentences.

Police were supposed to be paid by the Judenräte, but often their salary was insufficient and irregular. Thus they were open to bribes, a situation that adversely affected moral standards. Understanding that the Jewish police served to enforce German policy, many left it; their places were taken mainly by people with no obligation to the Jewish population and by other doubtful elements. As standards declined, so did the relationship between the police and the Jewish public, especially after Jewish police began taking part in sending Jews to

. Ghetto police personnel were generally exempt from labor service and were even empowered to release others from their labor obligations (in exchange for bribes). Guarding the ghetto walls also corrupted the police and placed them in confrontations with the public. Often Jewish policemen worked with local police and even with German soldiers to control smuggling. Their close ties with the German and local authorities and the opportunity for kickbacks led many Jewish communities to identify them with the occupying forces. Over time, corruption became part of the Jewish police identity, and many of them lived lives of luxury amid the remainder of the poor Jewish population. Thus, the original esteem in which the Jewish police were held was replaced with hatred and contempt.

Nonetheless, some police officers tried to improve the lot of the Jewish community, despite harsh German supervision. Several tried to fight corruption and were active in bolstering public supervision over the police force. Other officers intervened with German authorities on behalf of Jews, at times paying with their lives.

The onset of deportations to killing centers in 1942 led to a new phase in the history of the Jewish police. The Germans generally ordered ghetto police forces to assist in deporting Jews and sometimes even on selection. In return, the Nazis assured them that they and their families would not be deported. Police officers who refused to obey the orders joined the deportees or were killed on the spot. In most instances, the police complied with German demands.

During this period, the status of the ghetto police hit an all-time low in Jewish eyes. Even then, however, there were instances when police gave advance warning of expulsions and cautioned Jews to hide. In some ghettos, police actively opposed deportation orders and even made up the core of the armed resistance movement. Most of these ghettos were in the Soviet Union or in the eastern part of Poland occupied by the Soviets from 1939 to 1941. In the Generalgouvernement, by contrast, relations between Jewish police and underground organizations were more often hostile. In both regions, however, there was considerable variation.

The number of police units was greatly reduced in the wake of deportations, and families of former police officers, who until then had been safeguarded, were usually murdered. At the same time, some Jewish underground organizations tried to take revenge on the Jewish police.

At the end of the war, the role of Jewish police and their actions became a highly controversial issue among Holocaust survivors. Dozens of police officers were tried in Jewish honor courts for improper conduct. Some were expelled from the Jewish community while others were merely barred from holding public office. The names of other former officers were cleared. It took years for the courts to decide not to put Jewish police on formal trial.

Some researchers have claimed that in small communities, relations between the Jewish police and the Jewish public were better than those in larger ones. Others have argued that corruption was more widespread in the General government ghettos, whereas police in areas under Soviet control until 1941 generally played a more positive role in ghetto life. The latest studies have shown conclusively, however, that there is no consistent correlation between either the size of the Jewish community or the location of the ghetto and police behavior. A proper evaluation of the Jewish police must be based on the study of each individual ghetto.