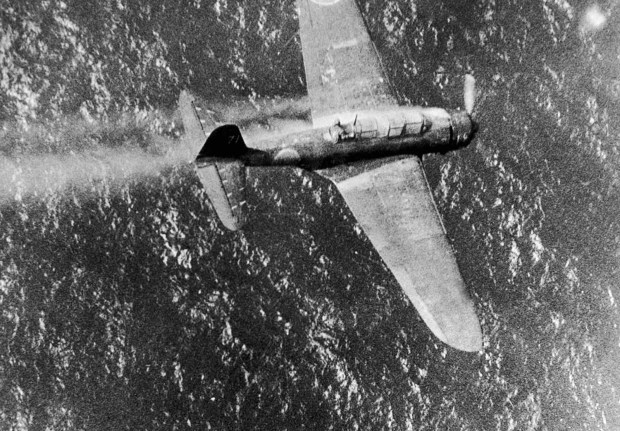 Pacific War, major theatre of World War II that covered a large portion of the Pacific Ocean, East Asia, and Southeast Asia, with significant engagements occurring as far south as northern Australia and as far north as the Aleutian Islands.

Rather then going into specifics, because so much has already been written about it and I probably won’t be adding new to it, I have decided to make this more visual by the pictures below. After all a picture paints a thousand words.

A member of a U.S. Marine patrol discovers this Japanese family hiding in a hillside cave, June 21, 1944, on Saipan. The mother, four children and a dog took shelter in the cave from the fierce fighting in the area during the U.S. invasion of the Mariana Islands. 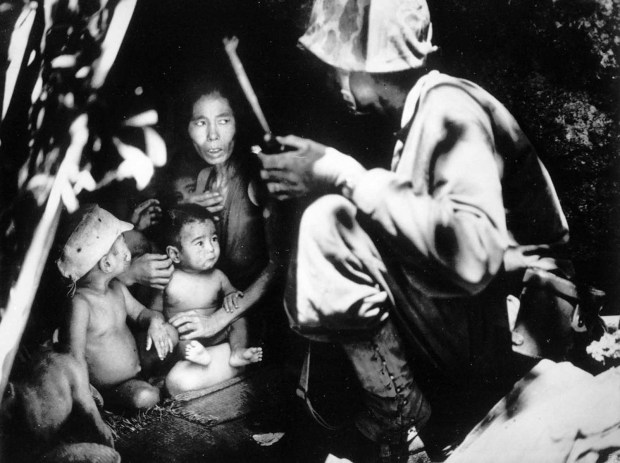 Two of twelve U.S. A-20 Havoc light bombers on a mission against Kokas, Indonesia in July of 1943. The lower bomber was hit by anti-aircraft fire after dropping its bombs, and plunged into the sea, killing both crew members 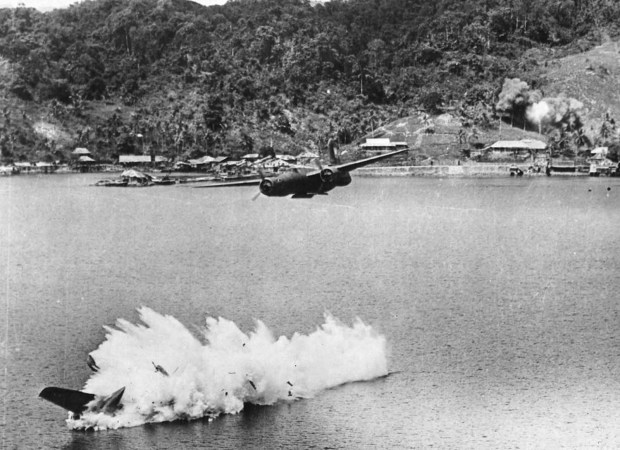 Torpedoed Japanese destroyer Yamakaze, photographed through periscope of USS Nautilus, 25 June 1942. The Yamakaze sank within five minutes of being struck, there were no survivors 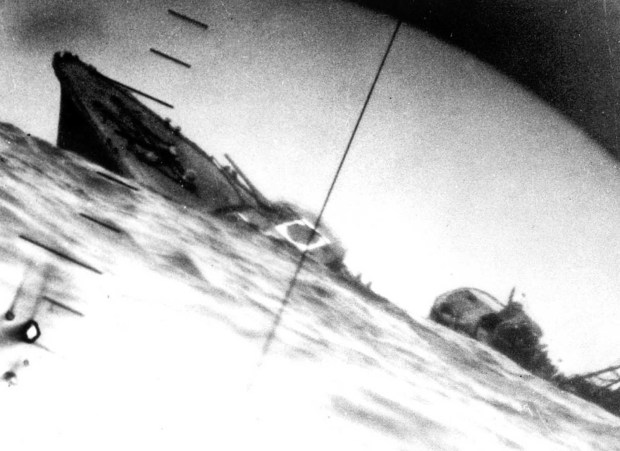 American reconnaissance patrol into the dense jungles of New Guinea, on December 18, 1942. Lt. Philip Winson had lost one of his boots while building a raft and he made a make-shift boot out of part of a ground sheet and straps from a pack 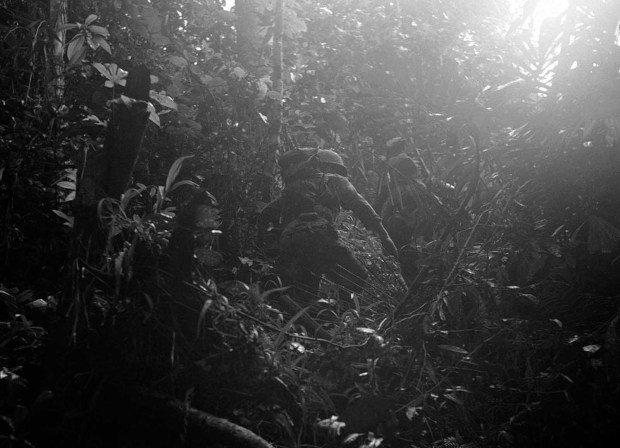 Crouching low, U.S. Marines sprint across a beach on Tarawa Island to take the Japanese airport on December 2, 1943. 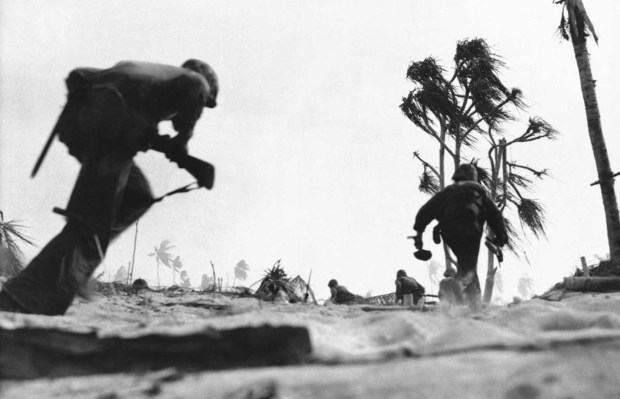 Sprawled bodies of American soldiers on the beach of Tarawa atoll testify to the ferocity of the battle for this stretch of sand during the U.S. invasion of the Gilbert Islands, in late November 1943. During the 3-day Battle of Tarawa, some 1,000 U.S. Marines died, and another 687 U.S. Navy sailors lost their lives when the USS Liscome Bay was sunk by a Japanese torpedo. 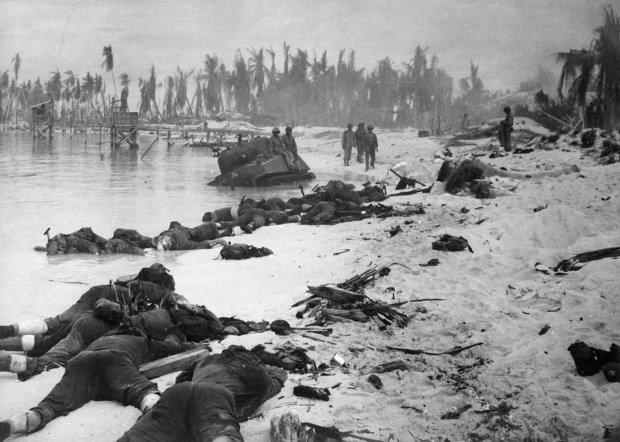 This photo provided by former Kamikaze pilot Toshio Yoshitake, shows Yoshitake, right, and his fellow pilots, from left, Tetsuya Ueno, Koshiro Hayashi, Naoki Okagami and Takao Oi, as they pose together in front of a Zero fighter plane before taking off from the Imperial Army airstrip in Choshi, just east of Tokyo, on November 8, 1944. None of the 17 other pilots and flight instructors who flew with Yoshitake on that day survived. Yoshitake only survived because an American warplane shot him out of the air, he crash-landed and was rescued by Japanese soldiers. 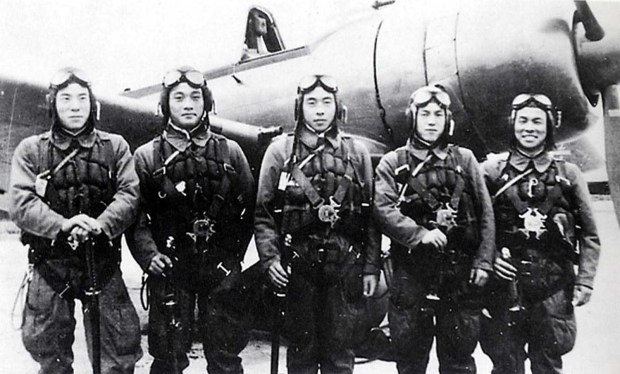 Aftermath of the November 25, 1943 kamikaze attack against the USS Essex. Fire-fighters and scattered fragments of the Japanese aircraft cover the flight deck. The plane struck the port edge of the flight deck, landing among planes fueled for takeoff, causing extensive damage, killing 15, and wounding 44 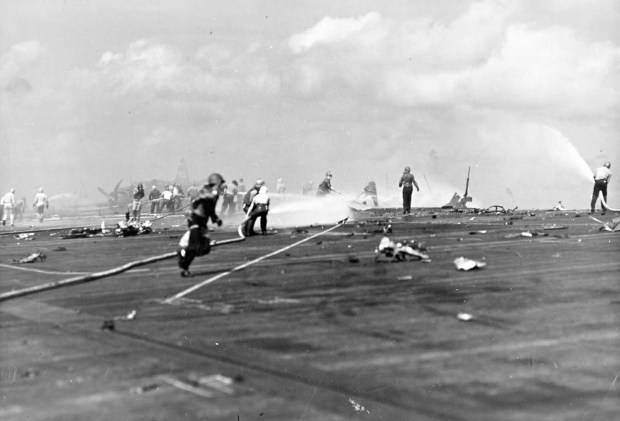 During a Japanese air raid on Yonton Airfield, Okinawa, Japan on April 28, 1945, the corsairs of the “Hell’s Belles,” Marine Corps Fighter Squadron are silhouetted against the sky by a lacework of anti-aircraft shells. 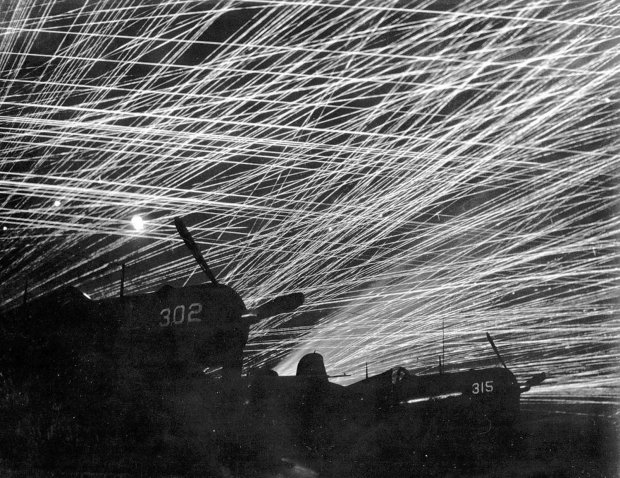