Erected in the dead of night on August 13, 1961, the Berlin Wall (known as Berliner Mauer in German) was a physical division between West Berlin and East Germany. Its purpose was to keep disaffected East Germans from fleeing to the West.

When the Berlin Wall fell on November 9, 1989, its destruction was nearly as instantaneous as its creation. For 28 years, the Berlin Wall had been a symbol of the Cold War and the Iron Curtain between Soviet-led Communism and the democracies of the West. When it fell, it was celebrated around the world.

During 1961 and 1989 many people were killed for trying to escape to West Berlin. The exact number of casualties is unknown, because some were categorized as “suicide”

Below are some pictures of some of those who didn’t make it or were wounded.

A refugee runs during an attempt to escape from the East German part of Berlin to West Berlin by climbing over the Berlin Wall on October 16, 1961.I don’t know  if he survived

East German border guards carry away a refugee who was wounded by East German machine gun fire as he dashed through communist border installations toward the Berlin Wall in 1971.

Dying Peter Fechter is carried away by East German border guards who shot him down when he tried to flee to the west in this August 17, 1962 photo. Fechter was lying 50 minutes in no-man’s land before he was taken to a hospital where he died shortly after arrival. 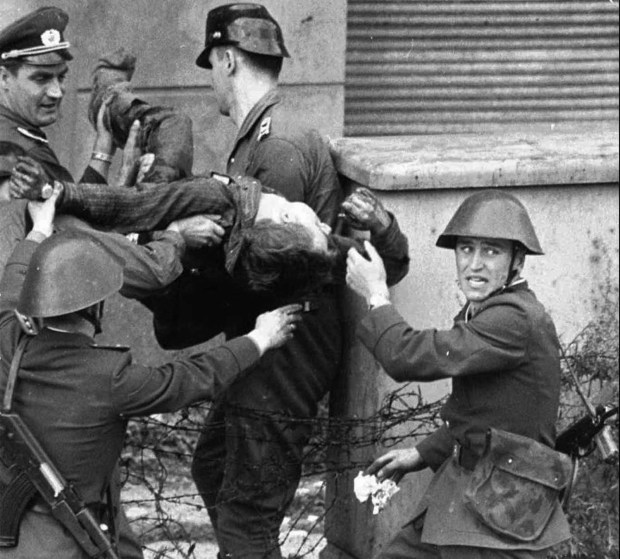 East German border guards carry away a 50 year old refugee, who was shot three times by East German border police on September 4, 1962, as he dashed through communist border installations and tried to climb the Berlin wall in the cemetery of the Sophien Church.

West Berlin’s regulatory authorities gave fugitives covering fire if they were being fired at by GDR border guards. This resulted in at least one lethal incident on 23 May 1962, when the border guard Peter Göring was shot dead by a West Berlin policeman.