It is often though that the Vietnam war started in the 60s, but in fact it dates back much further then that.

It really started on the 19th of December 1946. In February Ho Chi Minh had already sent a telegram  to U.S. President Harry S. Truman requesting support for independence.

The Second Indochina War which is more commonly referred to as the Vietnam War began in 1955 and lasted until 1975 when the North Vietnamese conquered South Vietnam. The United States, which had supported France during the first Indochina war, backed the South Vietnam government in opposition to the National Liberation Front and the Communist-allied NVA. The North benefited from military and financial support from China and the Soviet Union, members of the Communist bloc.

Following are pictures of the Vietnam war.

Hovering U.S. Army helicopters pour machine gun fire into a tree line to cover the advance of South Vietnamese ground troops in an attack on a Viet Cong camp 18 miles north of Tay Ninh, near the Cambodian border, in March of 1965.

An American officer serving with the South Vietnam forces poses with group of Montagnards in front of one of their provisionary huts in a military camp in central Vietnam on November 17, 1962. They were brought in by government troops from a village where they were used as labor force by communist Viet Cong forces. The Montagnards, dark-skinned tribesmen numbering about 700,000, live in the highlands of central Vietnam. The government was trying to win their alliance in its war with the Viet Cong. 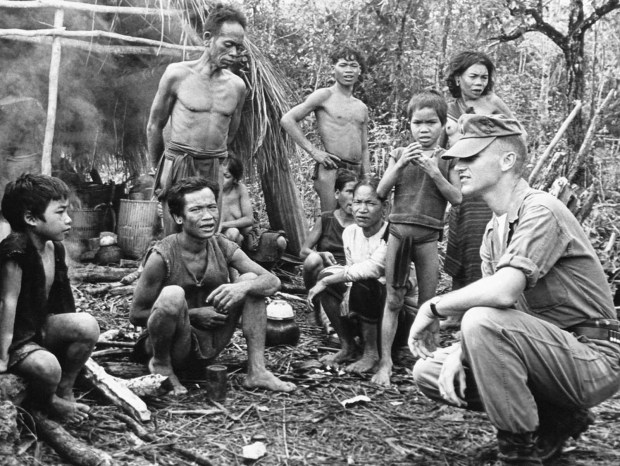 U.S. President Lyndon B. Johnson listens to a tape recording from his son-in-law Captain Charles Robb at the White House on July 31, 1968. Robb was a U.S. Marine Corps company commander in Vietnam at the time. 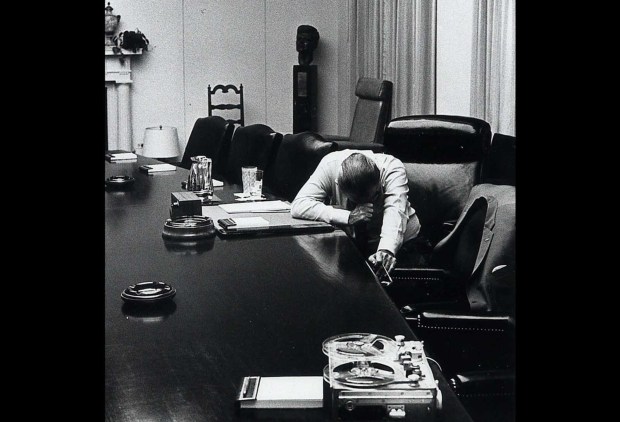 Smoke rises from the southwestern part of Saigon on May 7, 1968, as residents stream across the bridge leaving into the capital to escape heavy fighting between the Viet Cong and South Vietnamese soldiers

Flying low over the jungle, an A-1 Skyraider drops 500-pound bombs on a Viet Cong position below as smoke rises from a previous pass at the target, on December 26, 1964. 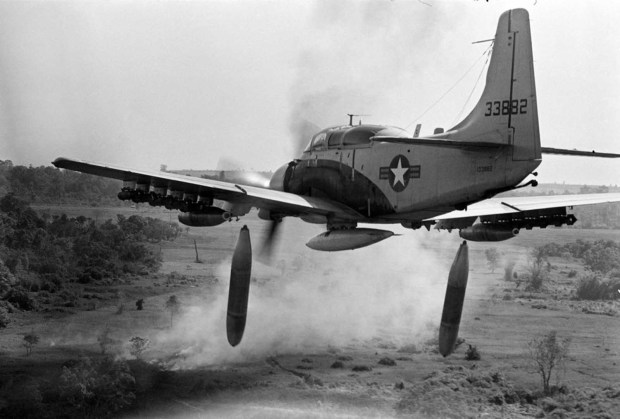 FBI agents carry Vietnam War draft resister Robert Whittington Eaton, 25, from a dwelling in Philadelphia on April 17, 1969, where Eaton had chained himself to 13 young men and women. The agent leading the way pushed one of the group who tried to block path to the sidewalk. At least six young persons were taken away with Easton.

A trooper of the 101st Airborne Division attempts to save the life of a buddy at Dong Ap Bia Mountain, near South Vietnam’s A Shau Valley on May 19, 1969. The man was seriously wounded in the last of repeated attempts by U.S. forces to capture enemy positions there.

Vietnamese and Cambodian refugees crowd a U.S. helicopter which evacuated them from immediate combat zone of the U.S.-Vietnamese incursion into Cambodia on May 5, 1970. They were taken to a refugee reception center at the Katum Special Forces camp in South Vietnam, six miles from the Cambodian border.

A father holds the body of his child as South Vietnamese Army Rangers look down from their armored vehicle on March 19, 1964. The child was killed as government forces pursued guerrillas into a village near the Cambodian border.

With the persuasion of a Viet Cong-made spear pressed against his throat, a captured Viet Cong guerrilla decided to talk to interrogators, telling them of a cache of Chinese grenades on March 28, 1965. He was captured with 13 other guerrillas and 17 suspects when two Vietnamese battalions overran a Viet Cong camp about 15 miles southwest of Da Nang air force base.

Flag-draped coffins of eight American Servicemen killed in attacks on U.S. military installations in South Vietnam, on February 7, are placed in transport plane at Saigon, February 9, 1965, for return flight to the United States. Funeral services were held at the Saigon Airport with U.S. Ambassador Maxwell D. Taylor and Vietnamese officials attending.

A Vietnamese litter bearer wears a face mask to keep out the smell as he passes the bodies of U.S. and Vietnamese soldiers killed in fighting against the Viet Cong at the Michelin rubber plantation, about 45 miles northeast of Saigon, on November 27, 1965.

The released prisoner of war Lieutenant Colonel Robert L. Stirm is greeted by his family at Travis Air Force Base in Fairfield, California, as he returns home from the Vietnam War, March 17, 1973. In the lead is Stirm’s daughter Lori, 15; followed by son Robert, 14; daughter Cynthia, 11; wife Loretta and son Roger, 12. This famous photo, also called “Burst of Joy,” won a Pulitzer Prize in 1974. The happy scene depicted here was not to last, however. Stirm, after spending five years in captivity, had received a “Dear John” letter from his wife Loretta, just three days before returning home. They divorced in 1974 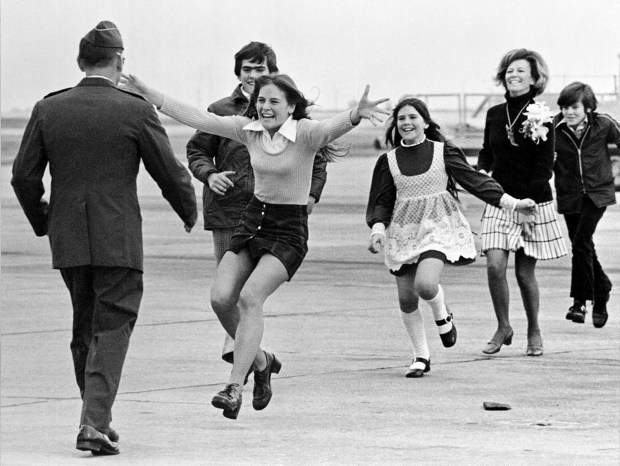