Armin Meiwes placed an ad on “The Cannibal Cafe” website asking for someone to eat, and shockingly, someone answered.

To the family next door, Armin Meiwes seemed the perfect neighbour. He mowed their lawn, repaired their car and even invited them round for dinner.

Other residents in the small German town of Rotenburg also believed there was nothing odd about the 42-year-old computer expert, whose light burned late into the night inside his creaking mansion. Yesterday, however, Meiwes appeared in court charged with killing – and then frying and eating – another man.

In one of the most extraordinary trials in German criminal history, the self-confessed cannibal admitted that he had met a 43-year-old Berlin engineer, Bernd Brandes, after advertising on the internet, and had chopped him up and eaten him.

Meiwes, who admitted that he had had an obsession with cannibalism from an early age, posted an ad in a forum on a website called The Cannibal Cafe, a blog for people with a cannibal fetish.

His post using the alias Franky stated that he was “looking for a well-built 18 to 30-year-old to be slaughtered and then consumed.”

Originally, Meiwes got many replies, though in the end they all ultimately backed out. Then, finally, he got a message from Bernd Jurgen Armando Brandes, an engineer from Berlin. It turned out that as much as Meiwes wanted to eat someone, Brandes really wanted to be eaten.

On March 9, the two met at Armin Meiwes home, in the small town of Rotenburg. Brandes began his evening by swallowing twenty sleeping pills, and half a bottle of schnapps. He then laid down in Meiwes bathtub, while Meiwes set up a video camera to showcase the event.

Meiwes first amputated Brandes penis with a knife, after unsuccessfully attempting to bite it off. Meiwes took the severed appendage and fried it in a pan with salt, pepper, wine, garlic and some of Brandes’ own fat. Unfortunately he burned the penis and was unable to eat it, so instead, he fed it to his dog.

Brandes had initially planned to join Meiwes in the cannibalism, however, he managed to only eat a single bite of his own flesh before the blood-loss made him too weak to continue.

Meiwes then drew Brandes a bath and took a break to read a Star Trek book, checking on Brandes every 15 minutes while he bled out. After the bath, Brandes collapsed into unconsciousness due to blood loss. After long hesitation and prayer, Meiwes killed Brandes by stabbing him in the throat.

He then hung the body on a meat hook. The entire ordeal took four hours, the entirety of which was caught on tape.

Over the next ten months, Meiwes devoured Brandes’ body, storing parts of his body in his freezer, hidden behind pizza boxes. Authorities say he consumed over 44 pounds of flesh.

In December of 2001, Meiwes was finally arrested. A college student had found a new advertisement for a victim online, as well as details about Brandes’ murder.

He called the police, who searched Meiwes home and found the body parts and videotape.

Meiwes admitted to the murder and the cannibalism, claiming it was an act of sexual pleasure, but added that he regrets his actions. He also plans to write a book in the hopes of deterring anyone who feels the need to follow in his footsteps.

On 30 January 2004, Meiwes was convicted of manslaughter and sentenced to eight years in prison. The case attracted considerable media attention.

Meiwes has admitted cannibalizing Brandes and has expressed regret for his actions. He added he wanted to write a book of his life story with the aim of deterring anyone who wants to follow his footsteps. Websites dedicated to Meiwes have appeared, with people advertising for willing victims. “They should go for treatment, so it doesn’t escalate like it did with me”, said Meiwes. While in prison, Meiwes has since become a vegetarian. He believes there are about 800 cannibals in Germany

In April 2005, a German court ordered a retrial after prosecutors appealed Meiwes’ sentence, arguing that he should have been convicted of murder because he killed for sexual gratification, a motive proved by his having videotaped the crime.The court ruled that the original trial had ignored the significance of the video in disproving the argument that Meiwes only killed because he had been asked to kill.

At his retrial, a psychologist stated that Meiwes could reoffend and still “had fantasies about devouring the flesh of young people”.On 10 May 2006, a court in Frankfurt convicted Meiwes of murder and sentenced him to life imprisonment 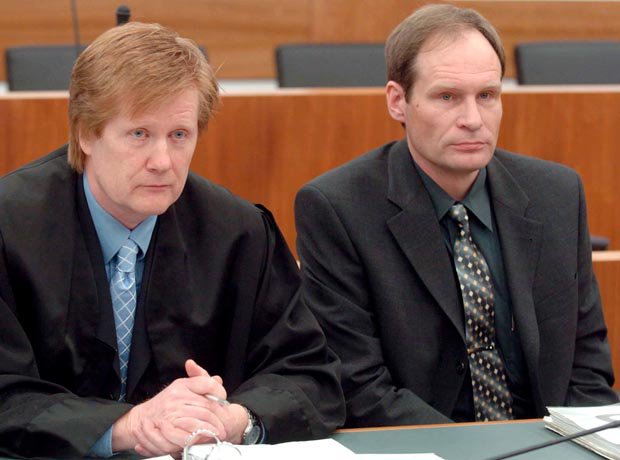 One thought on “Cannibal turned vegetarian”