Unfortunately there is no other way to describe Father Neil Horan(not the One Direction dude) then crazy. On several occasions he disrupted major events and costing one athlete a GOLD medal.

On 20 July 2003, Horan ran across the track at the Formula One British Grand Prix at Silverstone Circuit, wearing a kilt and waving a religious banner, which stated “Read the Bible. The Bible is always right”.

His protest took place on the 200 mph (320 km/h) Hangar Straight. Several drivers chose to swerve to avoid him and the safety car had to be deployed to protect him and the competitors. Horan was tackled by track marshal Stephen Green, who removed him from the track before he was arrested.He was charged with, and pleaded guilty to, aggravated trespass and sentenced to two months imprisonment.

At the 5 June 2004 Epsom Derby, Horan was spotted by police and shoved to the ground moments before they believed he was about to run in front of the horses. He was later released without charges, although police did circulate information about Horan to other sporting events.

In spite of the fact that security for the 2004 Athens Olympics was tight due to fears of a terrorist attack, on 29 August Horan (who had flown to Athens earlier that day) was able to run onto the course of the men’s marathon event near the 35 km mark, carrying a placard.

Horan pushed Brazilian Vanderlei de Lima, who was leading the race, into the crowds alongside the course.After a few seconds Horan was hauled off the shaken runner by Greek spectator Polyvios Kossivas. Kossivas subdued Horan and helped de Lima up and back to the lane.

Horan was promptly arrested by Greek police (who were later criticized for not giving runners adequate protection). Following the encounter with Horan, De Lima suffered from leg cramps and muscle pain, although he continued running and completed the race. He lost 20 seconds from his 48-second lead and finished third, after being passed by Italian Stefano Baldini and American Mebrahtom Keflezighi at the 38 km mark. 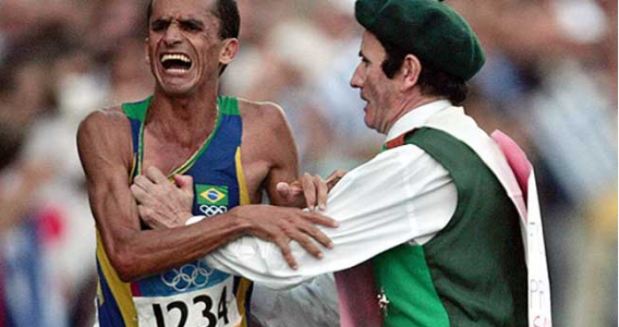 The head of the Brazilian Track Federation launched an appeal based on the controversy surrounding Horan’s interference in the marathon. The federation asked that de Lima also be awarded a gold medal, citing precedents set in past Olympic matches where extenuating circumstances have led to more than one winner in certain sports. This request was denied. Horan was given a 12 months’ suspended sentence by a Greek court and fined €3,000. Although he could have been sentenced to up to five years’ imprisonment, the judge gave him a suspended sentence due to his mental state.

During the 2006 FIFA World Cup in Germany, Horan was arrested by German police before he could stage a planned protest. He had written to German Chancellor, Angela Merkel, and The Kingdom newspaper in County Kerry, Ireland, informing them that he planned to dance a peace jig outside the stadium in Berlin before the World Cup final. He told The Kingdom he would carry posters declaring “Adolf Hitler was a good leader who was following the word of Christ”, give the Hitler salute and light a candle for Hitler at the Gestapo headquarters.He spent two months in custody awaiting trial but was released on 15 September 2006 when the judge discharged the case.

On 20 January 2005, Kevin McDonald, the Archbishop of Southwark (South London), defrocked Horan. Horan later made the following statement to the press: “I completely reject this decision. I appeal to the much higher court of heaven and the court of Jesus Christ … I now cannot preach, I cannot give out communion – I am little more than a pagan.”

On 13 April 2007, Horan was served with an Anti-Social Behaviour Order (ASBO) banning him from entering, on the day of the race, any of the London boroughs that the course of the London Marathon passed through.

Horan auditioned for Series 3 of Britain’s Got Talent in 2009 (airing 16 May) performing an Irish jig in traditional costume. The judges put Horan through to the next round. It was revealed he was let through because the producers “did not know” who he was.[10] The makers of the show, TalkbackThames and Syco, defended showing Horan’s audition on the show.[1] Horan then appeared on The Ray D’Arcy Show on Today FM and revealed that he did not get through to the next stage. 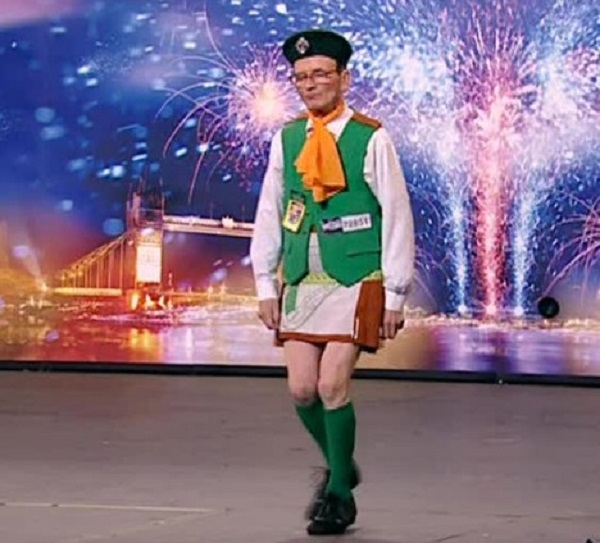 With all the mayhem he caused you’d suspect he would be locked up in a mental institution, but no he still roams free.