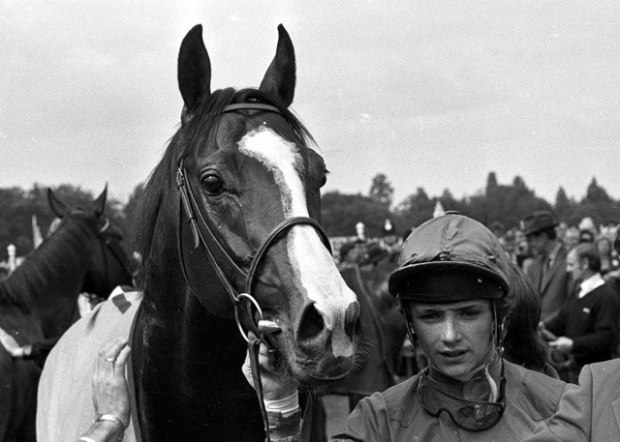 On this day 36 years ago, gunmen stole the champion Irish race horse Shergar from a stud farm owned by the Aga Khan in County Kildare, Ireland. The five-year-old thoroughbred stallion, named European horse of the year in 1981, was worth $13.5 million and commanded stud fees of approximately $100,000.

The most famous and valuable racehorse in the world, Shergar had won the 1981 Epsom Derby by ten lengths, which is the longest winning margin in the race’s 202-year history. Following this triumph, he had four more major derby wins and was named European Horse of the Year.

When he retired after that first season, racehorse owners paid up to $120,000 for shares in his services impregnating mares, eager to have young horses from his bloodline to train for races.

The stallion had a white blaze mark on his face, four white “socks” and a distinctive racing style of running with his tongue hanging out – he was gentle, calm and kind.

On the cold, muggy evening of February 8, 1983, Shergar was kidnapped by a gang of men in balaclavas, thought to be part of the IRA.

The bay colt was owned by the Aga Khan, the billionaire spiritual leader to 15 million Ismaili Muslims. When he was returned to Ireland after her first winning season, he was syndicated for $15 million between 34 people – each share was worth around $382,000, six of which were kept by the Aga Khan.

Shergar was just five years old when he was snatched in the middle of the night from the Ballymany Stud in Co. Kildare. He had been preparing for his second season as a breeding stallion, the BBC said.

It was shortly after 8 pm when the son of Jim Fitzgerald, Shergar’s head groom that lived at the stud, heard a knock at the door. He opened it to find two men wearing balaclavas wielding guns – one of them said, “We have come for Shergar. We want $3 million for him.”

Jim Fitzgerald, a father of six, was forced at gunpoint to Shergar’s stable where they were joined by six more masked gunmen. He loaded Shergar into the horsebox the men had brought with them. Fitzgerald was then forced into their car at gunpoint.

Among others, one reason the investigation was so difficult for authorities was because the kidnappers had chosen the day before Ireland’s big Goff’s racehorse sale to abduct Shergar, when many horseboxes were being driven across all of Ireland’s roads, thereby making it hard to differentiate him.

After driving him around for three hours, the kidnappers dumped Fitzgerald out of the car. He found his way to a telephone and rang his brother – this phone call led to a series of phone calls between Shergars’ shareholders, his vet, racing associates and several Irish Ministers. This process is referred to as “a caricature of police bungling,” as the actual police weren’t notified until 8 hours after Shergar was taken and the men were long gone from the area.

Using coded phrases, the kidnappers soon began negotiations with a representative of the Aga Khan over the telephone, but made sure to hang up before 90 seconds passed so that authorities couldn’t track their location.

Negotiations with the kidnappers were short-lived and fruitless. Despite a highly publicized search by authorities, Shergar was never seen again and no ransom was paid. The case was never solved, although there were a variety of theories about the identity of the kidnappers. The most popular one held that the Irish Republican Army stole the animal in order to raise money for weapons, but ended up killing him in a panic because he was too difficult to handle. 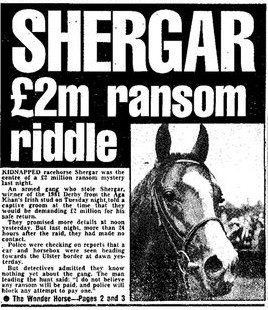 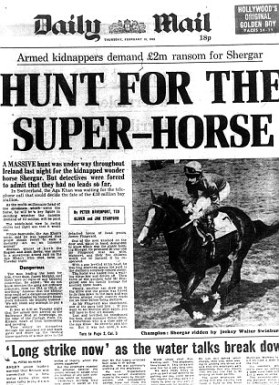