The bombing of Dresden was a British/American aerial bombing attack on the city of Dresden, the capital of the German state of Saxony, that took place during the Second World War in the European Theatre. In four raids between 13 and 15 February 1945, 722 heavy bombers of the British Royal Air Force (RAF) and 527 of the United States Army Air Forces (USAAF) dropped more than 3,900 tons of high-explosive bombs and incendiary devices on the city.

In this British Official Photo, on the night of February 13 and the morning of February 14, 1945, Lancasters of R.A.F. Bomber Command made two very heavy attacks on Dresden, Germany. Heavy bombers of the U.S. 8th Air Force attacked this target the following day. The smoke from fires still burning drifted across Dresden on February 14, 1945. 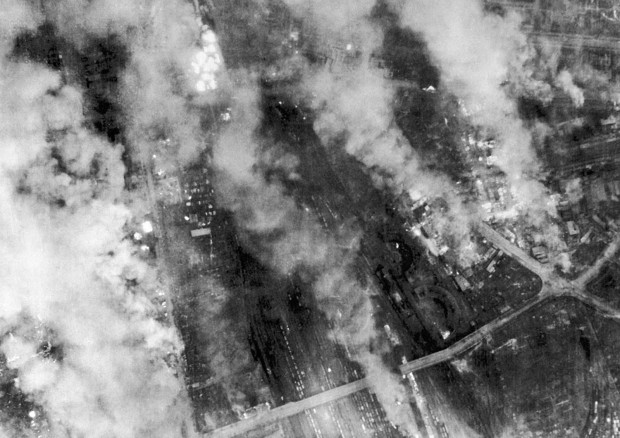 In four raids between 13 and 15 February 1945, 722 heavy bombers of the British Royal Air Force and 527 of the United States Army Air Forces dropped more than 3,900 tons of high-explosive bombs and incendiary devices on the city. The incendiary bombs created so much fire that a firestorm developed. The resulting firestorm destroyed 40 square kilometers (15 square miles) of the city center. The more the city burned, the more oxygen was sucked in – and the greater the firestorm became. It is thought that the temperature peaked at 1,800 degrees Fahrenheit (990 degrees Celsius). The surface of roads melted and fleeing people found that their feet were burned as they ran.

In all, between 22,000 and 40,000 people were killed by the Allied bombing in Dresden. Historians still argue over the number of deaths. However, there were so many refugees in the city at the time that the real figure will almost certainly never be known.

A pile of bodies awaits cremation after the firebombing of Dresden, February 1945. 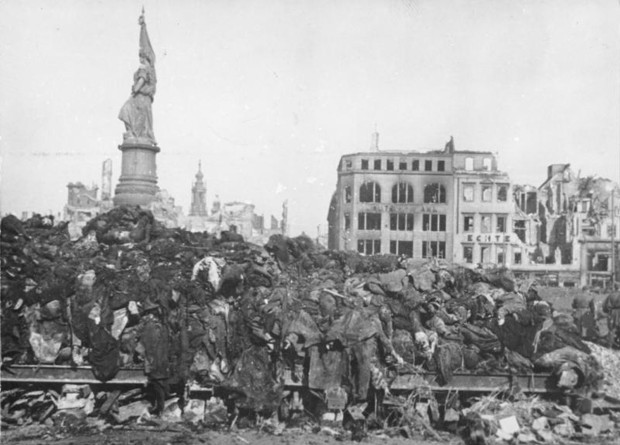 The destruction of the city provoked unease in intellectual circles in Britain. According to Max Hastings, by February 1945, attacks upon German cities had become largely irrelevant to the outcome of the war.