Something that always fascinated(for lack of a better word) me about Hitler is the double standards he applied. As the leader of his country he always portrayed himself as some one with principles, but yet he so easily broke those principles time and time again.

Hitler hated smoking, he had been a smoker himself but had stopped at a young age. In 1939, German scientists were the first to identify the link between smoking and lung cancer in the first epidemiological study. After those findings Germany initiated a strong anti-tobacco movement.

The campaign announced that  cigarettes were “enemy of the people” it included posters, lectures, psychological counselling, nicotine gums.

As well as methods to make the  cigarettes less tasteful by injecting chemicals into the cigarettes.Smoking had become Non aryan.

However due to the addictive nature of smoking cigarettes it created one thing that the Nazis just couldn’t ignore, revenue ie money.

Smoking cigarettes became a mass phenomenon after World War I and the interwar years. So popular in fact that by 1929 the SA decided to set up their own Cigarette company in order to create a line of  revenue.

The factory operated under the umbrella name ‘ Sturm Zigaretten’ it produced four brands: Trommler , Alarm, Sturm and Neue Front.The latter one  was the most expensive brand, 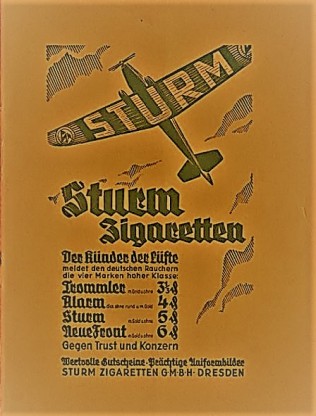 Coercion tactics were used to encourage the sale of these cigarettes. Members of the SA were expected to exclusively. smoke Sturm Cigarette Company cigarettes ,they were even compelled to smoke Sturm cigarettes; bags were searched, and  if any other brand were found, there would be a fine.The SA bullied against and punished the use of other brands, especially the market leader, Reemtsma. SA gangs attacked shops that sold rival brands.

Sturm Zigaretten  first paid dividends to the SA in 1930. By 1932, it had a turnover of 36 million reichsmarks, and the SA made considerable profits; 1933 saw even higher returns.

And by July 1934 the Night of the Long Knives had removed the threat of the SA. 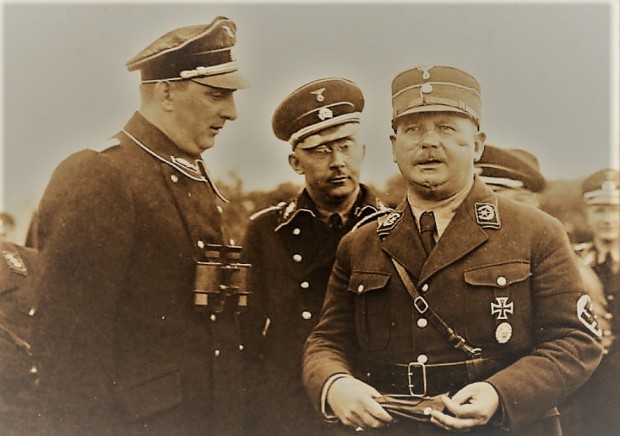 At this stage Reemtsma’s Jewish partners had emigrated, along with many of its  Jewish employees, with help from the company.

Reemtsma approached , the new SA leader, SA-Stabschef Viktor Lutze, to see if a deal could be done,Lutze  cancelled the SA’s contract with Sturm Cigarettes and made a deal with Reemtsma; in exchange for a fixed sum of  250 000 reichsmarks, to be paid annually, Reemtsma would now produce the SA’s cigarettes. Sturm, filed for bankruptcy in 1935.

In 1937, Reemstra merged with “Haus Neuerburg cigarettes”  in Cologne and achieved  65% of the total market share. 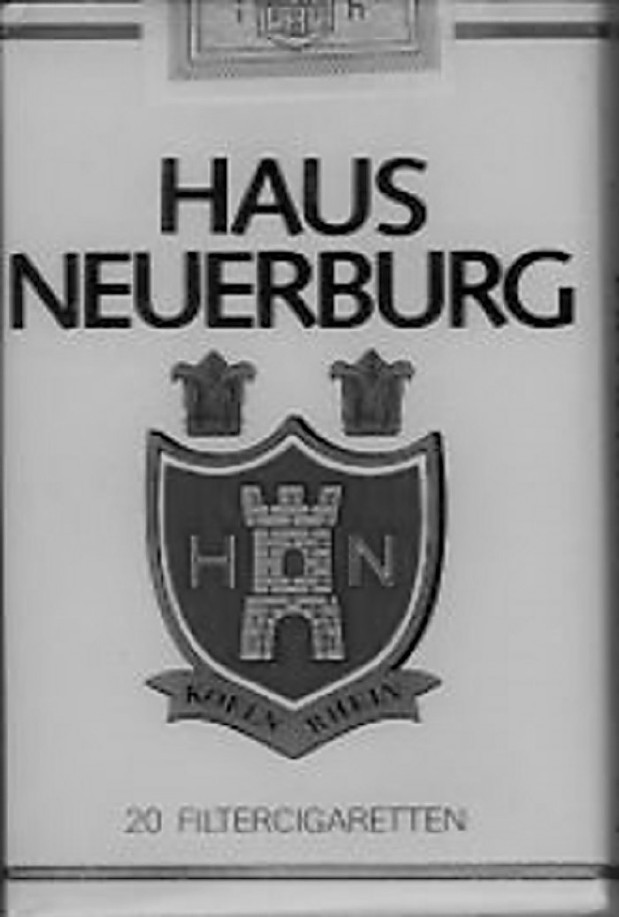 Between 1933 and 1939, the firm’s profits increased to 114 Million Reichsmark. In 1939, Philipp F. Reemtsma was promoted leader of the Fachuntergruppe Zigarettenindustrie part of the National Socialist economy and recognized by Göring as an economy leader.

Cigarettes were distributed free to soldiers, including minors, as part of their pay, and the market continued to grow rapidly.

Forced labour was used by Reemtsma during the war, with prison camps set up at some locations. Reemtsma also used forced labour, including child labour, to harvest tobacco in the Crimea.

By 1941, tobacco taxes made up about a twelfth of state income, and the anti-smoking efforts  which had started 2 years prior, were being discouraged. In 1942 there was a shortage of tobacco, and 2/3 of all German tobacco factories were shut down,some were converted into armaments factories. Tobacco went on the ration, but despite that  Reemtsma remained a profitable entity.

Reemtsma’s financial support of the Nazis was unparalleled among German companies. The SA and other party organizations were given six-figure sums, and the Hitler Youth were given an aircraft.

Reemtsma Cigarettenfabriken GmbH is STILL  one of the biggest tobacco and cigarette producers in Europe and a subsidiary of Imperial Tobacco. The company’s headquarters is in Hamburg, Germany,Among their brands are famous cigarette names like Gauloises,Davidoff and John Player Special. Ironically 73 years after WWII, some of the companies once linked to the Nazi regime are still killing people.