For the size of the country it is astonishing how many football greats come from the Netherlands.

Names like Johann Cruijff,Johan Nesskens,Ruud Gullit,Marco van Basten and Arjen Robben to name but a few, but the name Sjaak Swart certainly belongs in that list. Sjaak (Sjakie) Swart was pivotal to the successes of Ajax in  1971 to 1973  the 2 consecutive years when they won the European Cup.

For his 31 caps for the Dutch National team he scored 10 goals. 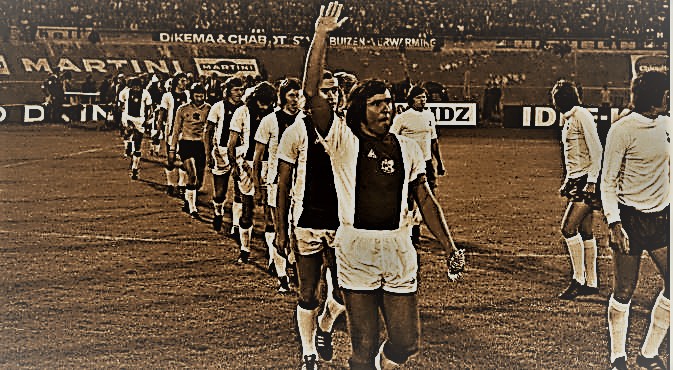 Born in in the small fishing village of Muiderberg some 20 kilometres east of Amsterdam in 1938 as Jesaia Swart , the son of a Jewish Fisherman.

His father and he were forced to disguise themselves as non-Jews during the Nazi occupation of the Netherlands from 1940 to 1945, hiding from the prying eyes of both Germans and Dutch collaborators, who rounded up any Jewish men, women and children in the country. Living a life comparable to a nightmare , fearing every knock at the the door Sjaak and his father managed to survive the war and the extermination of nearly 75 per cent of the Jewish population of the Netherlands.

The siblings of Louis Swart,Sjaak’s father, all died Louis would never have anymore children because as part of escaping the Nazis he had himself sterilized.

Not much is known about Sjaak’s mother ,all that I discovered it that she lived long enough to hand Sjaak his first Ajax jersey,she died of cancer in 1948. The gift of that jersey by his mother sealed his life long loyalty to the club.

Swart, joined the Ajax academy in 1949.He is still involved in Football today, aged 80.

What I find amazing about this is that although I am a big fan of the men in Orange, the Dutch National team, I never knew that Sjakie Swart was Jewish and had survived the horrors and a most certain death if he had been caught.

It is also an indication that the Holocaust is still in the living memory of so many.