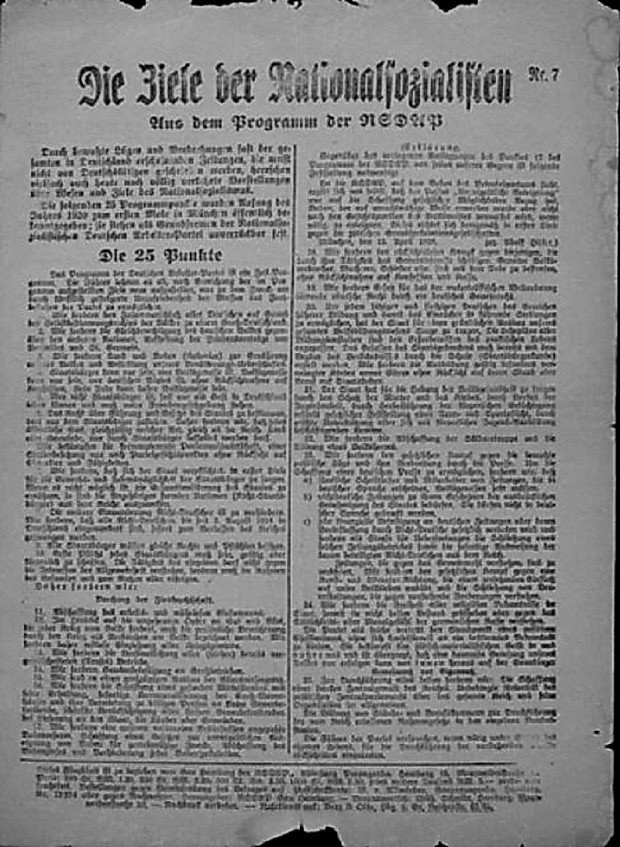 Throughout history warning signs have been ignored over and over again. It is very important to keep history alive but it is even more important to learn from it, alas that is the one thing that is often forgotten.

People often think that the warning signs of the Nazi regime were only there since 1933,others think  that the signs were there after Hitler published “Mein Kampf”

The fact Hitler had already been thinking about his plans years before that, even before the NSDAP was formed and even before he joined the DAP(German Workers Party) the predecessor for the NSDAP. 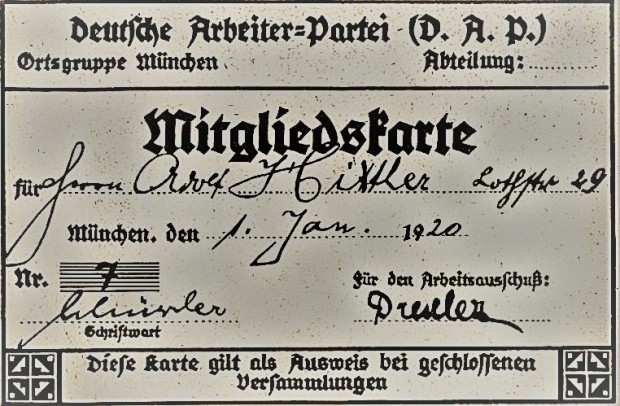 On the day the DAP dissolved and the NSDAP was formed,February 24 1920, Hitler and the then leader of the NSDAP ,Anton Drexler, published the blue print of what they saw as the future for Germany and the great German reich.

1. We demand the union of all Germans in a Great Germany on the basis of the principle of self-determination of all peoples.

2. We demand that the German people have rights equal to those of other nations; and that the Peace Treaties of Versailles and St. Germain shall be abrogated.

3. We demand land and territory (colonies) for the maintenance of our people and the settlement of our surplus population.

5. Those who are not citizens must live in Germany as foreigners and must be subject to the law of aliens.

6. The right to choose the government and determine the laws of the State shall belong only to citizens. We therefore demand that no public office, of whatever nature, whether in the central government, the province, or the municipality, shall be held by anyone who is not a citizen.

We wage war against the corrupt parliamentary administration whereby men are appointed to posts by favor of the party without regard to character and fitness.

7. We demand that the State shall above all undertake to ensure that every citizen shall have the possibility of living decently and earning a livelihood. If it should not be possible to feed the whole population, then aliens (non-citizens) must be expelled from the Reich.

8. Any further immigration of non-Germans must be prevented. We demand that all non-Germans who have entered Germany since August 2, 1914, shall be compelled to leave the Reich immediately.

9. All citizens must possess equal rights and duties.

10. The first duty of every citizen must be to work mentally or physically. No individual shall do any work that offends against the interest of the community to the benefit of all.

11. That all unearned income, and all income that does not arise from work, be abolished.

12. Since every war imposes on the people fearful sacrifices in blood and treasure, all personal profit arising from the war must be regarded as treason to the people. We therefore demand the total confiscation of all war profits.

13. We demand the nationalization of all trusts.

14. We demand profit-sharing in large industries.

15. We demand a generous increase in old-age pensions.

16. We demand the creation and maintenance of a sound middle-class, the immediate communalization of large stores which will be rented cheaply to small tradespeople, and the strongest consideration must be given to ensure that small traders shall deliver the supplies needed by the State, the provinces and municipalities.

17. We demand an agrarian reform in accordance with our national requirements, and the enactment of a law to expropriate the owners without compensation of any land needed for the common purpose. The abolition of ground rents, and the prohibition of all speculation in land.

18. We demand that ruthless war be waged against those who work to the injury of the common welfare. Traitors, usurers, profiteers, etc., are to be punished with death, regardless of creed or race.

19. We demand that Roman law, which serves a materialist ordering of the world, be replaced by German common law.

20. In order to make it possible for every capable and industrious German to obtain higher education, and thus the opportunity to reach into positions of leadership, the State must assume the responsibility of organizing thoroughly the entire cultural system of the people. The curricula of all educational establishments shall be adapted to practical life. The conception of the State Idea (science of citizenship) must be taught in the schools from the very beginning. We demand that specially talented children of poor parents, whatever their station or occupation, be educated at the expense of the State.

21. The State has the duty to help raise the standard of national health by providing maternity welfare centers, by prohibiting juvenile labor, by increasing physical fitness through the introduction of compulsory games and gymnastics, and by the greatest possible encouragement of associations concerned with the physical education of the young.

22. We demand the abolition of the regular army and the creation of a national (folk) army.

23. We demand that there be a legal campaign against those who propagate deliberate political lies and disseminate them through the press. In order to make possible the creation of a German press, we demand:

(a) All editors and their assistants on newspapers published in the German language shall be German citizens.

(b) Non-German newspapers shall only be published with the express permission of the State. They must not be published in the German language.

(c) All financial interests in or in any way affecting German newspapers shall be forbidden to non-Germans by law, and we demand that the punishment for transgressing this law be the immediate suppression of the newspaper and the expulsion of the non-Germans from the Reich.

Newspapers transgressing against the common welfare shall be suppressed. We demand legal action against those tendencies in art and literature that have a disruptive influence upon the life of our folk, and that any organizations that offend against the foregoing demands shall be dissolved.

24. We demand freedom for all religious faiths in the state, insofar as they do not endanger its existence or offend the moral and ethical sense of the Germanic race.

The party as such represents the point of view of a positive Christianity without binding itself to any one particular confession. It fights against the Jewish materialist spirit within and without, and is convinced that a lasting recovery of our folk can only come about from within on the pinciple:

25. In order to carry out this program we demand: the creation of a strong central authority in the State, the unconditional authority by the political central parliament of the whole State and all its organizations.

The formation of professional committees and of committees representing the several estates of the realm, to ensure that the laws promulgated by the central authority shall be carried out by the federal states.

The leaders of the party undertake to promote the execution of the foregoing points at all costs, if necessary at the sacrifice of their own lives.

On April 13 1928 Hitler wrote the following clarification in relation to point 17 of the program.

Regarding the false interpretations of Point 17 of the program of the NSDAP on the part of our opponents, the following definition is necessary:

“Since the NSDAP stands on the platform of private ownership it happens that the passage” gratuitous expropriation concerns only the creation of legal opportunities to expropriate if necessary, land which has been illegally acquired or is not administered from the view-point of the national welfare. This is directed primarily against the Jewish land-speculation companies.

Next time you see a political party publishing a program, read it very carefully and read it again.