The title of this blog could be from any fictitious novel. A children’s book or even a fairy tale, but it actually describes a bizarre reality which caused so much destruction.

The story of Hitler’s naturalization process resembles something of a farce. On April 7 1925 he had given up his Austrian citizenship, it was only on February 1932 he received his German citizenship. This means for 7 years he had been stateless, technically had had been an illegal immigrant. At any stage in that period he could have been deported, however instead of deportation he managed to become the leader of one of the biggest political parties.

On 25 February 1932, Dietrich Klagges, who was the interior minister of Brunswick and  a member of the NSDAP, appointed Hitler as administrator for the state’s delegation to the Reichsrat in Berlin, making Hitler a citizen of Brunswick, and also of Germany.

In less then 3 weeks after receiving his German citizenship he ran against Hindenburg in the 1932 presidential elections, which was held in two rounds, March 15 and April 10 1932. 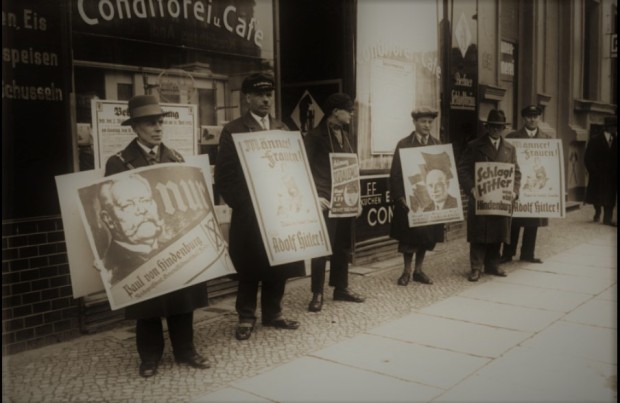 Ir surprises me that none of the opposition parties questioned the legality of his candidature. I am not saying it was illegal but it strikes me at least odd that a man who had been an illegal immigrant 19 days before the election suddenly was able to run for the highest office in the country.

I am not going into his political career because too much of that has already been documented.

I will however go into the fact that he was a vegetarian, although he hadn’t been a vegetarian all his life but certainly by 1937/38 he followed a vegetarian diet, He also abstained from smoking and alcoholic beverages.

The fact he was vegetarian was used as a propaganda tool.In a contemporaneous pro-Nazi children’s magazine called “Die Weisse Fahne- Neugeist” (the white flag- new spirit)  a magazine which basically promoted something which is now called ‘mindfulness’ published the following article in one of its editions.

“Do you know that your Führer is a vegetarian, and that he does not eat meat because of his general attitude toward life and his love for the world of animals? Do you know that your Führer is an exemplary friend of animals, and even as a chancellor, he is not separated from the animals he has kept for years?…The Führer is an ardent opponent of any torture of animals, in particular vivisection, and has declared to terminate those conditions…thus fulfilling his role as the savior of animals, from continuous and nameless torments and pain.”

Bizarrely it links one of  the most evil men(if not the most evil) who ever lived to something as peaceful and supposedly serene as mindfulness.