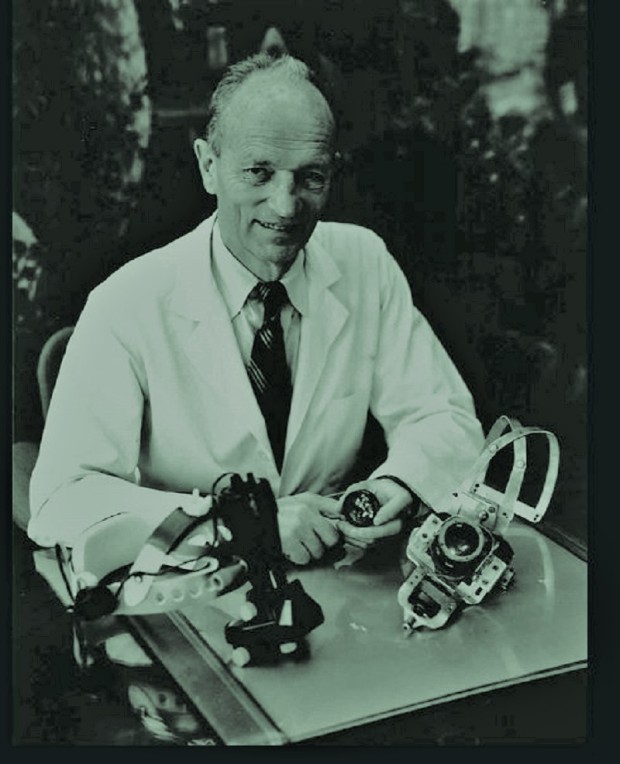 Just before Christmas 2011 I lost the sight in my right eye. The retina had become detached but after 2 operations the sight could not be saved, in fact my eye shrunk, dramatically  and I have now a glass shell with  an eye painted on it in front of the remainder of my eye.

In November 2014 the retina in my left eye also became detached, so I was facing going blind. I had to undergo an emergency operation in a Hospital in Cork which is 100 km away from my home in Limerick.

In Cork the consultant surgeon advised me he would be putting a scleral buckle in place to re-attach my retina and to save my eye and sight. The operation was a success this time and my eye was saved.

The man who pioneered this technology was Dr Charles L. Schepens. He was born in Mouscron, Belgium, in 1912  He initially studied mathematics before graduating from medical school in 1935 at State University of Ghent in Belgium.In 1937 he served as assistant to Dr. L. Hambresin in Brussels.

In 1940, he was appointed as a Captain in the Medical Corps of the Belgian Air Force, where he served until the country was invaded by the Nazis in May 1940. He escaped to France and worked with the French and Belgian resistance,  In 1942, under the nom de guerre “Jacques Pérot,” he spearheaded a secret information and evacuation pipeline in the Pyrenees, under the cover of a country lumber mill near the village of Mendive. He was arrested several times by the Gestapo.

He was first arrested by the Gestapo in October 1940 while he still was in Belgium  on false accusations  of using a bus to transport Allied pilots out of Belgium. Although he was released 10 days later, this experience turned the previously apolitical doctor into an activist, and he allowed his office to be used as a post office for underground agents, arranging for the transfer of maps and such information as troop movement.

In 1942, a spy in Gestapo headquarters alerted him that he was about to be arrested, and he escaped to Paris.

In an of the mill  effort to find  an escape route to Spain, he and a group of fellow resistance members came across  an abandoned sawmill near the town of Mandive in the Pyrenees on the Spanish border.

One of the key features was a 12-mile-long cable-car system extending up the mountain and ending near the border.

Dr. Schepens, bought the mill in July 1942 with backing from a wealthy French patriot and had it in full operation by the end of the year. The site became a functioning lumber enterprise, taking orders, delivering wood and meeting a payroll. Not to cause any suspicion Dr. Schepens(aka Jacques Perot)  developed relationships with the occupying Germans, leading his Basque neighbors to think that he was a Nazi collaborator.

Men, mainly men he helped to escape, who did manual labor around the mill could secretly ride the cable-car system to the top of the mountain and slip into Spain, often with the assistance of a shepherd named Jean Sarochar.

More than 100 Allied pilots, prisoners of war, Belgian government officials and others made their way out of France over the cable railway. The system also was used to move documents, currency, propaganda and other materials into and out of France.

Everything went according to plan until 1943: That year, a captured resistance agent exposed him. The Gestapo came for him a second time. He escaped before they could arrest him. He had told the Gestapo “it is now 10 o’clock. I have 150 workers idle, because they have not been given their orders this morning. Give me 10 minutes with them. I’ll give the orders and come back.”. He then just walked out.

He spent 16 days in the forest before reaching Spain and, eventually, England, where he resumed his medical career.

After the war, Schepens resumed his medical career at Moorfields.In 1947, he immigrated to the United States and became a fellow at the Harvard Medical School.

He became famous in the ophthalmic community for his work in creating the first binocular, stereoscopic indirect ophthalmoscope (1946) and in treating retinal detachment with an encircling scleral buckle (1953).

If the Gestapo had arrested him the second time, he more then likely would have been executed. Amazing to think of what could have happened to my eye in that case.