Germany and Italy weren’t the only countries with Fascists parties. Several European countries had National Socialist Fascists partyies, for example  The Netherlands had the NSB.

In Belgium the Rexist Party(aka Rex), led by Léon Degrelle, won about 10 percent of the seats in the parliament in 1936.

After failing 3 times to pass his final law exams at the Catholic University of Leuven , Degrelle, who was a dynamic orator, entered politics. Using national banking scandals and corruption of the established political parties as issues, he organized the Rexist Movement in 1930, allegedly to cleanse the Roman Catholic religion of political contamination.Its name was derived from the Roman Catholic journal and publishing company Christus Rex (Latin for Christ the King). 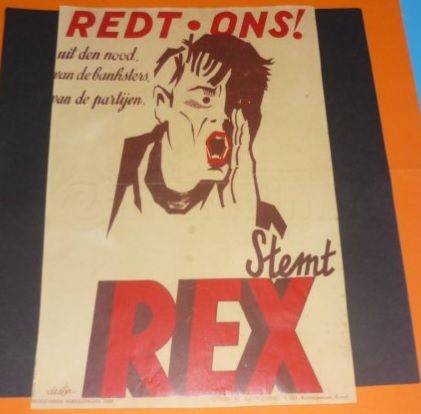 Initially it stayed loyal tho the monarchy, in their flag they included the crown. At the outbreak of WWII they endorsed the Belgian government’s policy of neutrality.