To conserve metal during World War II the movie Oscars were made out of wood.

When World War II began the neutral Republic of Ireland banned all war footage from their newsreels.

In England, during World War II, Lord Woolton, the Minister Of Food, actually considered a plan by Government scientists to feed the population with black pudding made from surplus human blood bank donations.

This idea was rejected 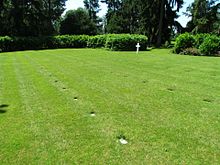 Plot E is approximately 100 metres away from the main cemetery and is a separate, hidden section which currently contains the remains of…