One of the most powerful weapons during WWII and indeed any other war was propaganda. It was however not only the governments that used propaganda, private also used propaganda, albeit in a more subliminal manner, in their advertising campaigns.

Some of these ads would put 21st century advertisers to shame. following are some examples of the ads allied style. 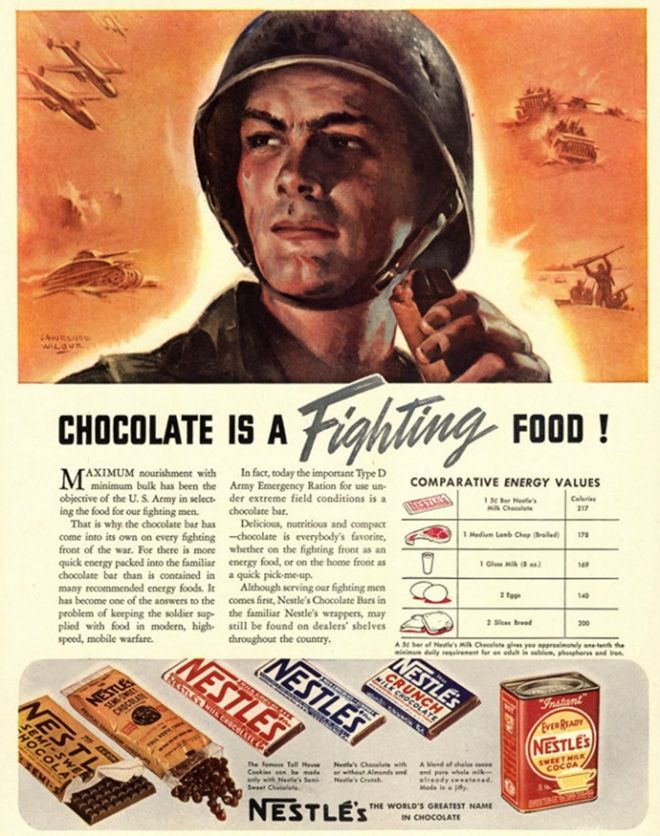 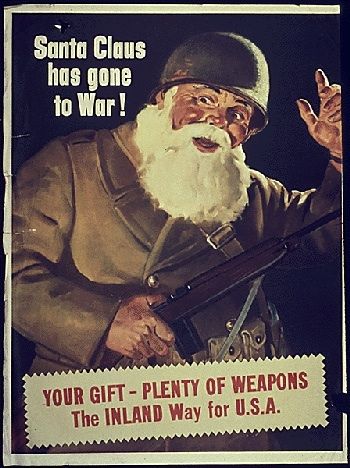 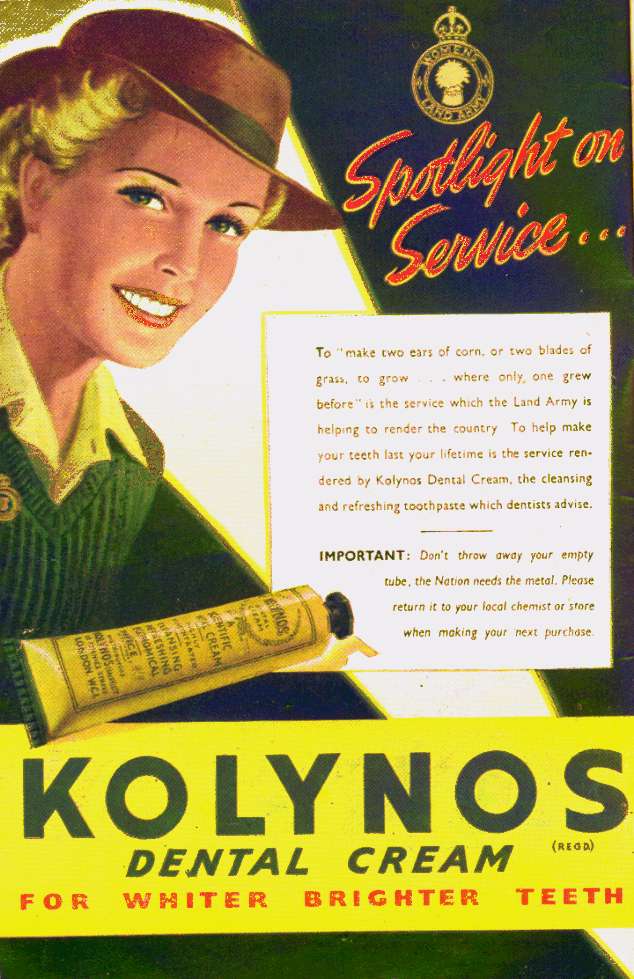 Have a coke and a smile even at war

“This is no time to be FRAIL! Bread is basic” – Fleishmann’s Yeast ad in ‘The Saturday Evening Post’, December 1942 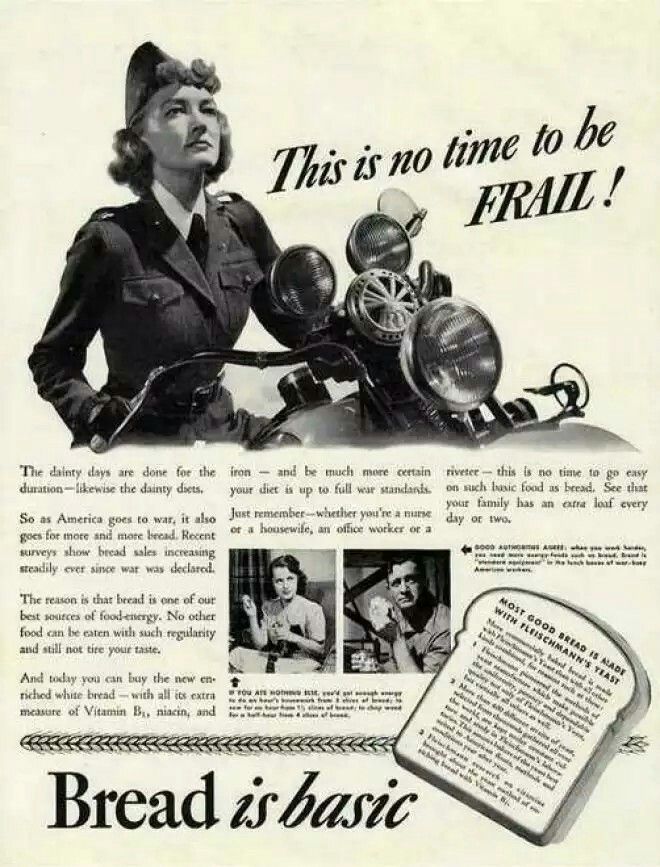 Boers and black Africans were placed in camps so that they would be unable to aid Boer guerrillas. It is reported that more than 27,000 Boers and 14,000 Africans died in the camps from disease and starvation. Most of the dead were children, clearly noncombatants in the conflict.

The Herero and Nama genocide was a campaign of racial extermination and collective punishment that the German Empire undertook in German South West Africa (modern-day Namibia) against the Herero and Nama people. It is considered one of the first genocides of… 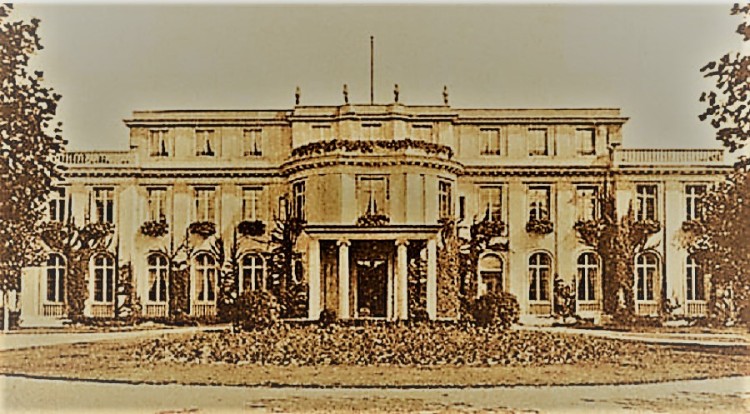 Today marks the 78th anniversary of the Wannsee Conference.

On January 20, 1942, 15 high-ranking Nazi Party and German government officials gathered at a villa in the Berlin suburb of Wannsee to discuss and coordinate the implementation of what they called the “Final Solution” of the Jewish Question.

The conference was held like any business conference or corporation event.Below are some of the documents. 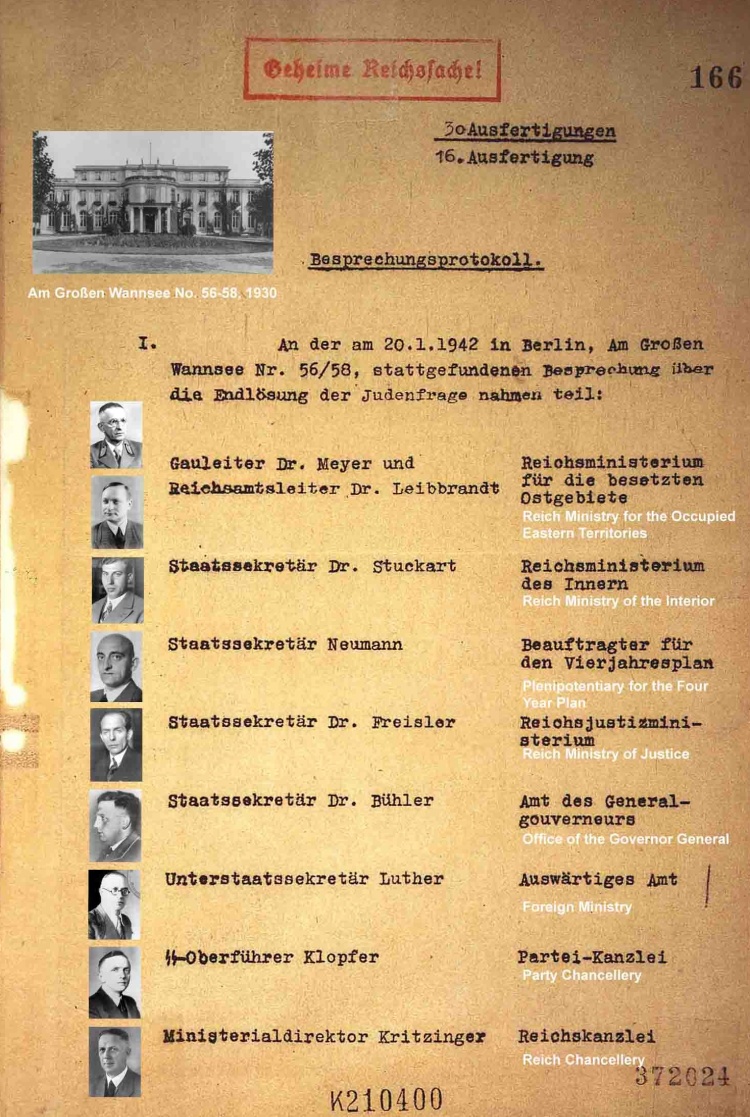 In preparation for the conference, Eichmann drafted a list of the numbers of Jews in the various European countries. Countries were listed in two groups, “A” and “B”. “A” countries were those under direct Reich control or occupation (or partially occupied and quiescent, in the case of Vichy France); “B” countries were allied or client states, neutral, or at war with Germany. The numbers reflect actions already completed by Nazi forces; for example, Estonia is listed as Judenfrei (free of Jews), since the 4,500 Jews who remained…

During WWII Hollywood did not sit still, it actively contributed to the US propaganda machine.

These propaganda movies were not done by unknown or obscure movie makers. They were done by some of the biggest studios in Tinseltown.One of the more surprising was no other then Walt Disney.

Education for Death: The Making of the Nazi is an animated propaganda short film produced by Walt Disney Productions and released on January 15, 1943, by RKO Radio Pictures, directed by Clyde Geronimi and principally animated by Ward Kimball. The short is based on the non-fiction book of the same name by American author Gregor Ziemer.

A propaganda look into the mind of Hans, a boy born into a German family. Watch as his attitude about the value of human life degrades as he is exposed to Hitler Youth and other Nazi organizations and attitudes.In the end, Hans and the rest of the…

The biggest group of people who were murdered during the Holocaust were the Jews. An estimated 6 million were killed.

The number of 6 million should have really been zero, because none of these people had done anything wrong, They were only killed because they were Jewish or had been Jewish, there was no other reason.

This may sound strange coming from somebody who writes a lot about the Holocaust but I really don’t care about that number of 6 million. It has become a statistic which often has been disputed and manipulated by people who want to use it for a political agenda. Personally I believe the number is higher.

What I am interested in ,is the personal individual stories.Because that is what each of all the 6 million people were, all unique individual.

Robert  Collis (1900–1975) was an Irish doctor and writer.He was born at Killiney, County Dublin. He joined the British Army in 1918 as a cadet, but resigned a year later to study medicine. He was appointed Director of the Department of Paediatrics at the Rotunda Hospital, Dublin, and in 1932 physician to the National Children’s Hospital, Harcourt Street. He developed neo-natal services at the Rotunda, particularly for premature babies.

He worked for the Red Cross in the Bergen-Belsen concentration camp after its liberation by Allied troops.

He was instrumental in bringing five orphaned children from the camp to Ireland in 1947, and adopted two of them. He met a Dutch nurse in Bergen Belsen, Han Hogerzeil, whom he later married, after divorcing his first wife.Below is an excerpt of his report of Bergen Belsen after the liberation. 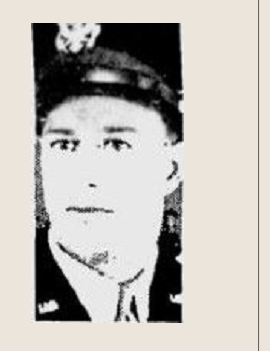 Returning from a bombing raid of Germany’s Ruhr Valley in 1944, American pilot James M. Hansen’s fighter plane ran into trouble and crashed. James was killed instantly. The Allies, who buried him in the temporary American military cemetery in the village of Molenhoek near the Dutch city of Nijmegen, placed this wooden cross on his grave. 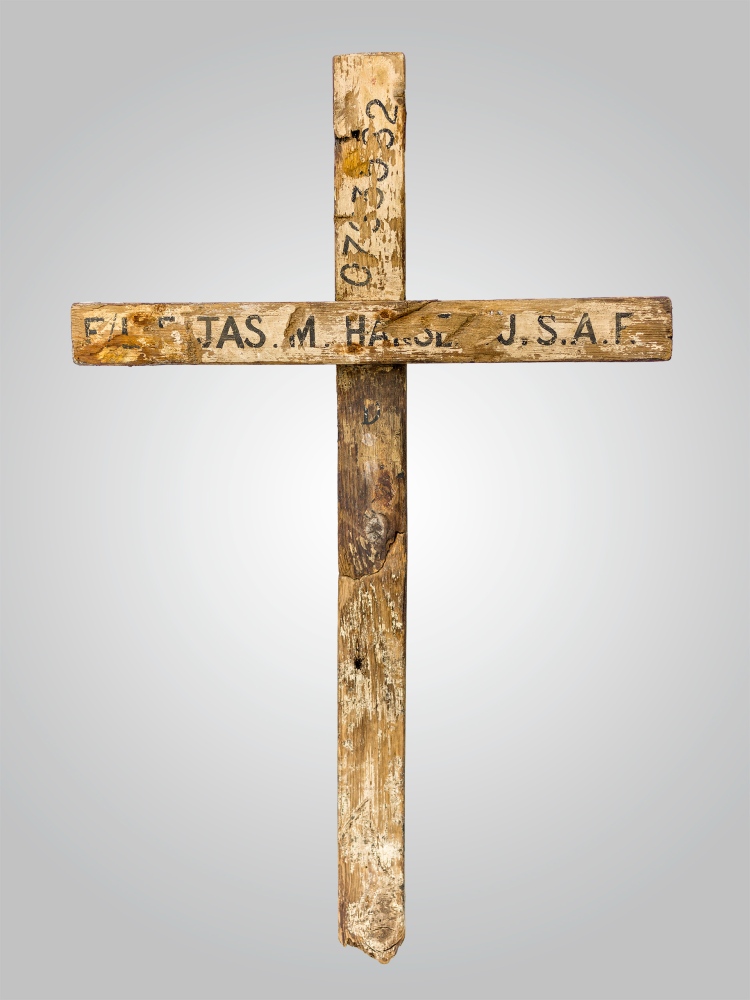 Then in 1947 a cemetery in the Dutch village of Margraten was designated as the permanent burial ground for fallen American soldiers.

The rest of the temporary American cemeteries were shut down. And just like thousands of other American soldiers, James M. Hansen’s body was reburied in the Netherlands American Cemetery in Margraten.

The wooden cross stayed behind in Molenhoek, only to be discovered by chance in 1990. The ground of the Margraten cemetery was donated in perpetuity to the United States…

I do believe there is a climate change, but I am just not completely convinced how much of this is really man made. There have been climate changes throughout the history of the planet and some much more severe then the current one.

The Night of the Big Wind (Irish: Oíche na Gaoithe Móire) was a powerful European windstorm that swept across Ireland beginning in the afternoon of 6 January 1839, causing severe damage to property and several hundred deaths; 20% to 25% of houses in north Dublin were damaged or destroyed, and 42 ships were wrecked.[1] The storm attained a very low barometric pressure of 918mbars and tracked eastwards to the north of Ireland, with gusts of over 100 knots (185 km/h; 115 mph), before moving across the north of England to continental Europe, where it eventually dissipated. At the time, it was the worst storm to hit Ireland for 300 years0 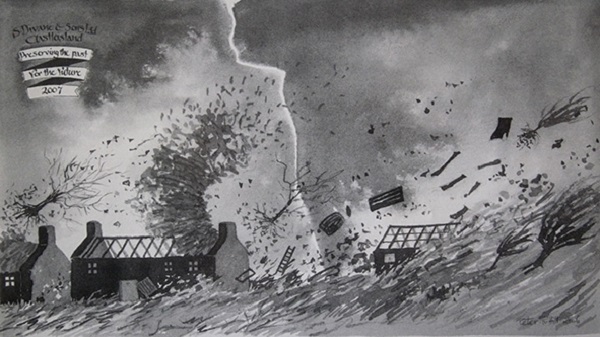 The storm developed in the mid-Atlantic…

Ala Gertner, Róża Robota, Regina Szafirsztajn and Estera Wajcblum, more then likely these names mean nothing to you. But these 4 young women showed a bravery that would make the bravery of any hardened warrior pale in comparison. 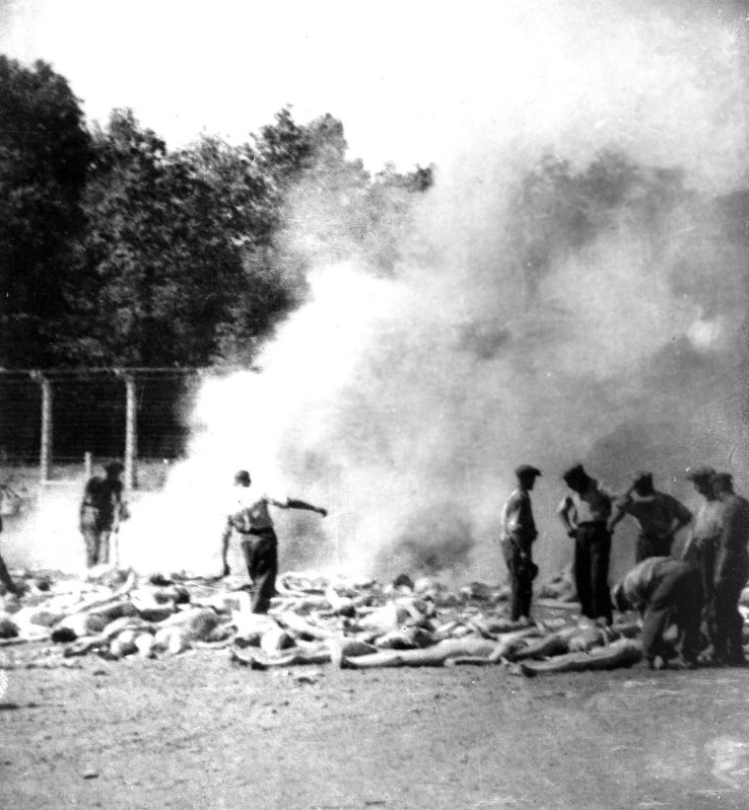 By 1943, the four women named above were all imprisoned in the Auschwitz Concentration Camp. Three of the women, Ala, Regina and Estera, were assigned to work in the munitions factory adjacent to Auschwitz. Recruited by Róża Robota, who worked…

Rutka was 14 years old when she was murdered in the gas chambers at Auschwitz. In the months before her death, Rutka, like Anne Frank in Amsterdam, kept a detailed diary documenting her deepest thoughts and fears. When she and her family – younger brother Henius, mother Dorka and father Yaakov ,were moved by the Nazis from their home in the Polish town of Bedzin to a closed ghetto, she believed she would not survive and hid the notebook under a floorboard, telling only her friend Stanislawa Sapinska of its existence.

From 19 January to 24 April 1943, without her family’s knowledge, Laskier kept a diary in an ordinary school notebook, writing in both ink and pencil, making entries sporadically. In it, she discussed atrocities she witnessed committed by the Nazis, and described daily life in the ghetto, as well as innocent teenage love interests. She also wrote about the…