Despite her exotic name Mata Hari was a Dutch woman. Her real name was Margaretha (Gretha)Zelle and was born in Leeuwarden, in the province of Friesland in the North West of  the Netherlands..

Today marks the centenary of her execution.

At 18, Zelle answered an advertisement in a Dutch newspaper placed by Dutch Colonial Army Captain Rudolf MacLeod (1 March 1856 – 9 January 1928), who was living in what was then the Dutch East Indies (now Indonesia) and was looking for a wife. Zelle married MacLeod in Amsterdam on 11 July 1895.

He was the son of Captain John Brienen MacLeod (a descendant of the Gesto branch of the MacLeods of Skye, hence his Scottish name) and Dina Louisa, Baroness Sweerts de Landas. The marriage enabled her to move into the Dutch upper class, and her finances were placed on a sound footing. They moved to Malang on the east side of the island of Java, traveling out on SS Prinses Amalia in May 1897, and had two children, Norman-John MacLeod (30 January 1897 – 27 June 1899) and Louise Jeanne MacLeod (2 May 1898 – 10 August 1919).

From the start, her marriage was troubled. After the birth of their son, Norman, in 1897, they sailed for the Dutch East Indies, where Gretha would spend four years living in military garrisons. After the birth of their daughter, Non, in 1898, tragedy struck. For reasons that remain a mystery, a nanny poisoned Norman and Non; he died, she barely survived. Although John was able to retire on a military pension in 1900, the couple were unhappy and returned to Holland.

Gretha and John separated in 1902 and she was granted custody. But when he refused to pay the legally agreed allowance, she wrote to his cousin, Edward, who acted as an intermediary. The correspondence reveals her desperation to keep her daughter but, without family connections and with most professions barred to women, she had few choices. She reluctantly returned Non to her father and left for Paris.

Where she reinvented herself as a performer of exotic Asian-inspired dances. She soon began touring all over Europe, telling the story of how she was born in a sacred Indian temple and taught ancient dances by a priestess who gave her the name Mata Hari, meaning “eye of the day” in Malay.

She acquired her superficial knowledge of Indian and Javanese dances when she lived for several years in Malaysia with her former husband, who was a Scot in the Dutch colonial army. Regardless of her authenticity, she packed dance halls and opera houses from Russia to France, mostly because her show consisted of her slowly stripping nude.

She became a famous courtesan, and with the outbreak of World War I her catalog of lovers began to include high-ranking military officers of various nationalities. In February 1917, French authorities arrested her for espionage and imprisoned her at St. Lazare Prison in Paris. In a military trial conducted in July, she was accused of revealing details of the Allies’ new weapon, the tank, resulting in the deaths of thousands of soldiers. She was convicted and sentenced to death, and on October 15 she refused a blindfold and was shot to death by a firing squad at Vincennes. 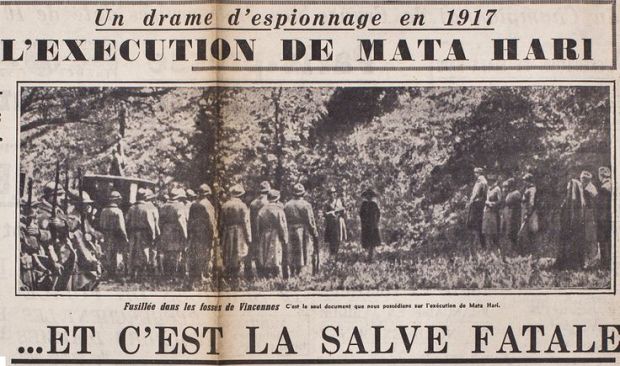 There is some evidence that Mata Hari acted as a German spy, and for a time as a double agent for the French, but the Germans had written her off as an ineffective agent whose pillow talk had produced little intelligence of value. Her military trial was riddled with bias and circumstantial evidence, and it is probable that French authorities trumped her up as “the greatest woman spy of the century” as a distraction for the huge losses the French army was suffering on the western front. Her only real crimes may have been an elaborate stage fallacy and a weakness for men in uniform.

Statue of Mata Hari in Leeuwarden, the Netherlands