In Europe there is a perception that the American efforts during WWII were only done by the US Government and the US armed forces(Army,Navy and Airforce).However there were also civilians involved in fighting the Germans and Japanese one of these groups were called “the Hooligan Navy” one of their members was no other then Ernest Hemingway.

In early 1942, with the world at war, American Naval and Coast Guard resources were stretched so thin that the Eastern Seaboard was virtually unprotected. Brazenly operating close to shore, German U-boats were a genuine threat to American Merchant Marine vessels, causing the deaths of hundreds of sailors. To counteract this threat, The “Hooligan Navy” was formed by the members of the Cruising Club of America, an organization of New England Yachtsmen. This ragtag group of sailors, undraftable reservists and adventurers were adopted by the U.S. Coast Guard and officially christened the Coastal Picket Patrol. Their sleek wooden yachts were repainted gray and outfitted with guns and listening equipment. For the rest of the war, they served as the eyes and ears of the Navy, seeking out and occasionally destroying U-boats and once again making the Atlantic Coast safe for shipping. Eventually, many members of the “Hooligan Navy” received commendations and medals for their wartime bravery.

The Coast Guard gave these little boats the gallant name the Corsair Fleet. The fleet’s members knew their chances. They immediately christened themselves the Hooligan Navy. 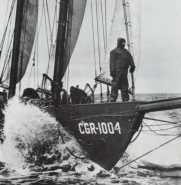 As soon as Germany declared war on the United States, Admiral Karl Doenitz, the  capable head of Hitler’s U-boat fleet, was eager to get to the USA east coast. He believed Germany’s only chance was to throttle Great Britain by cutting off the supplies America was sending. He knew that ninety-five per cent of the oil from the Louisiana and Texas fields went in tankers along the coast, and he guessed that our navy, now spread thin, could do little to protect this crucial traffic.

He was right. A month later Captain Reinhard Hardegan, the first U-boat skipper to arrive, cruised around unchallenged in New York harbor: “I cannot describe the feeling in words,” he said “but it was unbelievable and beautiful and great. . . We were the first to be here, and for the first time in this war a German soldier looked out on the coast of the USA.” 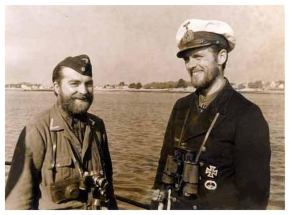 A few hours later he torpedoed the Coimbra, carrying 80,000 barrels of oil (fifty-three gallons to the barrel) so close inshore that Long Island citizens called local police stations to report a fire.
That May another U-boat captain harvesting this rich field arrived off Miami and was astounded to find the city glowing bright. This early in the war, nobody seemed to have the authority to order the mayor to turn off the lights. When the Navy begged Mayor Reeder to extinguish them, he said the hell with that: it would discourage the tourists.

The spectacle certainly cheered at least one tourist. Captain Cremer of the U-333 wrote, “Against the footlight glare of a carefree new world were passing the silhouettes of ships recognizable in every detail and shape as the outlines in a sales catalog. Here they were formally presented to us on a plate: please help yourselves.”

The Germans helped themselves with a free hand. In the first four months of 1942 the U-boats sank 515,000 tons—eighty-seven ships—along the East Coast.
The US government responded to the crisis by bringing into the service yachts and sports fishing boats and their owners—equipping the larger vessels with a couple of depth charges or a pair of twenty-millimeter guns and begging their crews to do what they could. (Ernest Hemingway got in on the act, talking the navy out of $32,000 worth of range and direction finding equipment for his thirty-eight-foot fishing boat Pilar.) 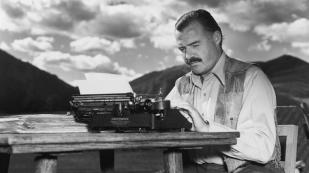 The improvised mini-navy couldn’t do much, of course, and it certainly didn’t intimidate the Germans. Once, off the Florida coast, the crew of a militant cabin cruiser was astounded to see rise from the sea beside them a tall steel conning tower, from which the skipper called down in what was reported to be “excellent Americanese”: “Get the hell out of here, you guys! Do you want to get hurt? Now scram.”
Nevertheless, they went out night after night, month after month. If they never hurt a U-boat, they were there combing the debris of what were in effect scores of forgotten Pearl Harbors for survivors of torpedoed ships. They saved hundreds. 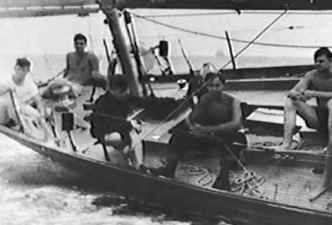 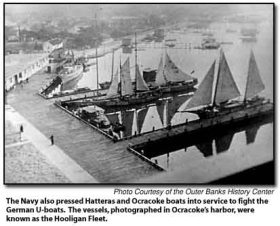