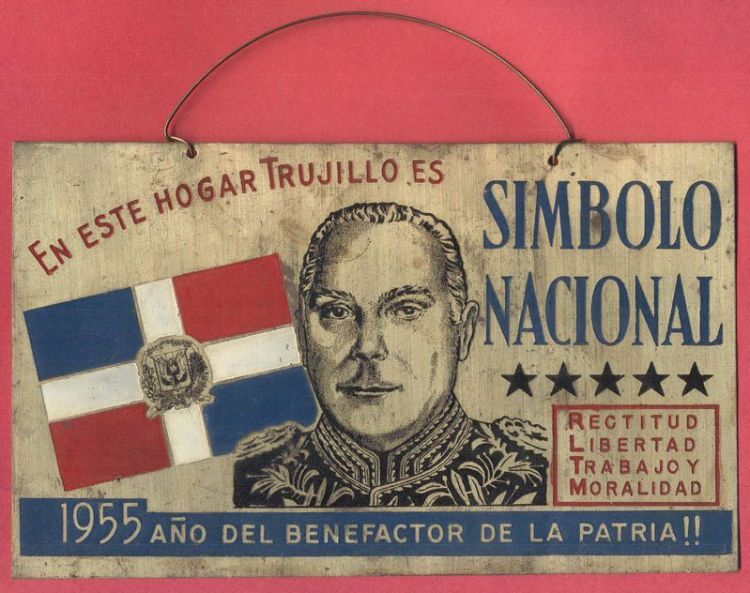 Rafael Trujillo was a dictator of the Dominican Republic for decades. He was assassinated in 1961.

In early 1930, after Dominican President Horacio Vasquez faced revolts and a provisional government had been established, Trujillo named himself a candidate in the new presidential elections.

During Trujillo’s campaign, he organized a secret police force to torture and murder supporters of the opposing candidate. Not surprisingly, Trujillo won the election by a landslide.

Shortly into Trujillo’s first term, Santo Domingo, the Dominican capital, was devastated by a hurricane. Trujillo used the disaster as an excuse to impose martial law on all citizens. He also imposed “emergency taxes” and even seized the bank accounts of his opposition. Trujillo spent the next six years renovating the city and building several monuments in his own honor. Upon completing renovations, Trujillo renamed Santo Domingo “Ciudad Trujillo.

I am not going into his career as the ruler of the Dominican Republic but into the pre WWII years.

Trujillo was known for his open-door policy, accepting Jewish refugees from Europe, Japanese migration during the 1930s, and exiles from Spain following its civil war. He developed a uniquely Dominican policy of racial discrimination, Antihaitianismo (“anti-Haitianism”), targeting the mostly-black inhabitants of his neighboring country and those within the Platano Curtain, including many Afro-Dominican citizens. At the 1938 Évian Conference the Dominican Republic was the only country willing to accept many Jews and offered to accept up to 100,000 refugees on generous terms. 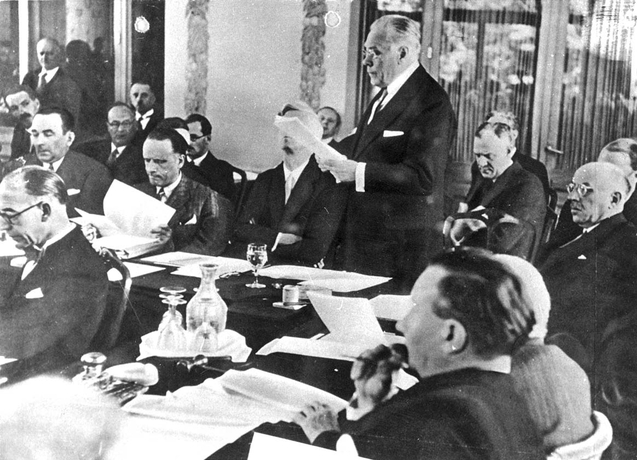 In 1940 an agreement was signed and Trujillo donated 26,000 acres (110 km2) of his properties for settlements. The first settlers arrived in May 1940; eventually some 800 settlers came to Sosua and most moved later on to the United States.

Refugees from Europe broadened the Dominican Republic’s tax base and added more whites to the predominantly mixed-race nation. The government favored white refugees over others while Dominican troops expelled illegal aliens, resulting in the 1937 Parsley Massacre of Haitian immigrants.

It was on this day 79 years ago  Rafael Trujillo ordered the execution of the Haitian population living within the borderlands; an estimated 20,000 were killed over the five days that followed, known as the Parlsey Massacre.Dominican soldiers would hold up a sprig of parsley to someone and ask what it was. How the person pronounced the Spanish word for parsley (perejil) determined their fate.

Rafael Trujillo, a proponent of anti-Haitianism, made his intentions towards the Haitian community clear in a short speech he gave 2 October 1937 at a dance in his honor in Dajabón. He said,

For some months, I have traveled and traversed the border in every sense of the word. I have seen, investigated, and inquired about the needs of the population. To the Dominicans who were complaining of the depredations by Haitians living among them, thefts of cattle, provisions, fruits, etc., and were thus prevented from enjoying in peace the products of their labor, I have responded, ‘I will fix this.’ And we have already begun to remedy the situation. Three hundred Haitians are now dead in Bánica. This remedy will continue.

Trujillo reportedly was acting in response to reports of Haitians stealing cattle and crops from Dominican borderland residents. According to some sources, the massacre killed an estimated 20,000 Haitians living in the Dominican border—clearly at Trujillo’s direct order. However, estimates of the number of victims vary widely.

For approximately five days, from 2 October 1937 to 8 October 1937, Dominican troops killed Haitians with guns, machetes, clubs, and knives. Some died while trying to flee to Haiti across the Artibonite River, which has often been the site of bloody conflict between the two nations. 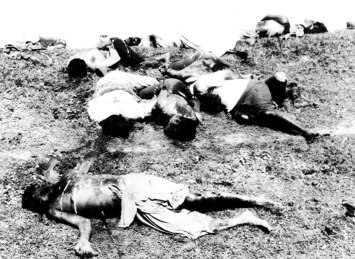 It is claimed that a majority of those who died were born in the Dominican Republic and belonged to well-established Haitian communities in the borderlands.However, it is difficult for anyone to ascertain a victim’s place of birth, especially considering that, in most cases, their identities are unknown, and their births may not have been officially recorded.

The Dominican Republic, formerly the Spanish colony of Santo Domingo, is the eastern portion of the island of Hispaniola and occupies five-eighths of the land while having ten million inhabitants. In contrast, Haiti, the former French colony of Saint-Domingue, is on the western three-eighths of the island and has almost exactly the same population, with an estimated 500 people per square mile. 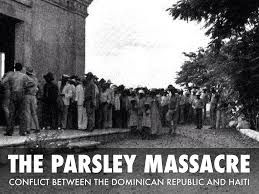 This has forced many Haitians onto land too mountainous, eroded, or dry for productive farming. Instead of staying on lands incapable of supporting them, many Haitians migrated to Dominican soil, where land hunger was low. While Haitians benefited by gaining farm land, Dominicans in the borderlands subsisted mostly on agriculture, and benefited from the ease of exchange of goods with Haitian markets.

Due to inadequate roadways connecting the borderlands to major cities,communication with Dominican markets was so limited that the small commercial surplus of the frontier slowly moved toward Haiti.This threatened Trujillo’s regime because of long-standing border disputes between the two nations. If large numbers of Haitian immigrants began to occupy the less densely populated Dominican borderlands, the Haitian government might try to make a case for claiming Dominican land. Additionally, loose borders let contraband pass freely, and without taxes between nations, depriving the Dominican Republic of tariff revenue.

Furthermore, the Dominican government saw the loose borderlands as a liability in terms of possible formation of revolutionary groups that could flee across the border with ease, while at the same time amassing weapons and follower.

Despite attempts to blame Dominican civilians, it has been confirmed by U.S. sources that “bullets from Krag rifles were found in Haitian bodies, and only Dominican soldiers had access to this type of rifle.” 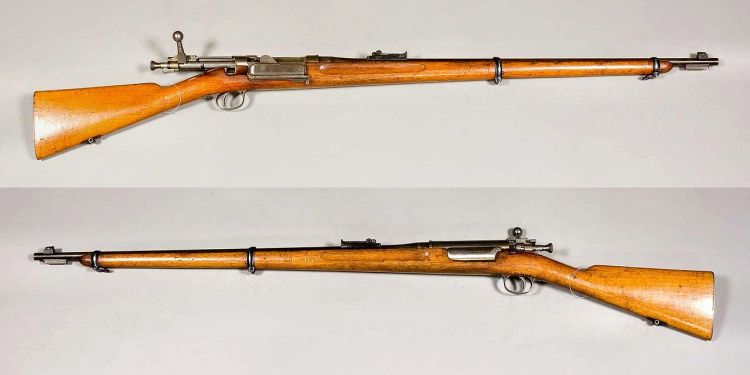 Therefore, the Haitian Massacre, which is still referred to as el corte (the cutting) by Dominicans and as kouto-a (the knife) by Haitians, was, “…a calculated action on the part of Dominican dictator Rafael Trujillo to homogenize the furthest stretches of the country in order to bring the region into the social, political and economic fold,” and rid his republic of Haitians.

Thereafter, Trujillo began to develop the borderlands to link them more closely with urban areas.These areas were modernized, with the addition of modern hospitals, schools, political headquarters, military barracks, and housing projects—as well as a highway to connect the borderlands to major cities.

Additionally, after 1937, quotas restricted the number of Haitians permitted to enter the Dominican Republic, and a strict and often discriminatory border policy was enacted. Dominicans continued to deport and kill Haitians in southern frontier regions—as refugees died of exposure, malaria and influenza.

Of this 30 dollars per victim, survivors received only 2 cents each, due to corruption in the Haitian bureaucracy.

Despite the number of reported deaths by Haitian, American and British officials, and following over half a century of agricultural expansion and population growth which may have led to accidental unearthing of human remains, no mass grave containing the bodies of murdered Haitians has ever been found.

Nonetheless, the lack of graves does not prove that the killings did not take place; however, it does suggest that the number of dead was in reality much less than those commonly reported. Reports from the day have numbers ranging from as little as 1,000 dead up to 12,000 even the upper end of the scale is dwarfed by the 30,000 victims which are commonly reported in the present. This inflation of the tally is attributed by some to the propaganda of anti-Trujillo exiles who wanted to rally international support against the dictator Trujillo.

On the Dominican side, there are no known formally documented first-hand witness accounts by military personnel carrying out the executions nor from civilians. Historian and former Dominican ambassador to the United States Bernardo Vega has cited that not many weeks after the end of the alleged massacre, Haitians were once again lining up for work at Dominican sugar cane plantations, something he considers as strange as “lambs willingly walking into the slaughterhouse”

Dominican historian Bernardo Vega has chronologically tabulated many conflicting reports on the number of victims, by various sources, with none of the estimates showing the exaggerated 20,000–30,000 figures. The earliest report, dated 11 October 1937, by the United States consul in Cap-Haïtien, puts the number at “almost one thousand”. On 6 November 1937 an official diplomatic note from the Haitian to the Dominican government speaks of 2,040. By 19 December, a Haitian minister in Washington gave the number 12,168. On the first of January 1938, the Dominican foreign minister offered the figure of 547.