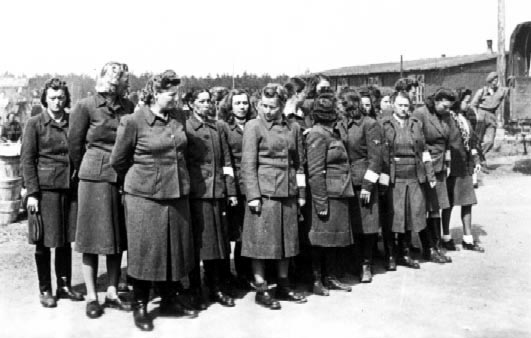 It wasn’t only men who committed heinous crimes in the concentration camps . There were many women who participated in torture and murder and often they enjoyed it. Some of the women were more evil then their male counterparts.

Below are some of the lesser known female guards and supervisors

The Black Angel of Ravensbrück.

At the age of 26 years, Carmen Maria Bischoff Mory left Switzerland and went to Berlin, in order to work as a journalist. She was impressed by the National Socialist ideology and became a Gestapo agent in 1934, for whom she spied on German emigrants in Paris. In 1938, she was arrested for espionage, was condemned to death and in 1940, pardoned by the French President. Back in Germany, she became active again for the Gestapo; but was accused of being a double agent and was sent to Nazi camp in Ravensbrück.  As a prisoner, she quickly rose through the hierarchy and became a cell-leader, who supervised cruel forced labor.

Carmen Mory was sentenced to death by hanging at the first Hamburg trials but she committed suicide in her cell by slashing her wrists before justice can be carried out.

Born as Alice Minna Elisabeth Elling in Berlin in 1903, she began her guard training at the Ravensbrück concentration camp in Germany in 1941. In October 1942 she was selected as one of the SS Aufseherin to be posted at the Majdanek camp near Lublin, Poland where she, came to be regarded as one of the most brutal supervisors . They regularly loaded trucks of women destined for the gas chambers. When a child was left over, the two would throw him or her on the top of the adults like luggage, and bolt the door shut. Orlowski often awaited the arrivals of new transports of women. She would then whip the prisoners especially across the eyes. In Majdanek, Orlowski was promoted to the rank of Kommandoführerin (Work Detail Overseer) in the sorting sheds.

As the SS Aufseherin, Orlowski had over 100 women under her supervision, who sorted through stolen items from gassed prisoners: watches, furs, coats, gold, jewellery, money, toys, glasses, etc. When the camp was evacuated, the Germans sent Orlowski to the notorious Kraków-Płaszów concentration camp near Kraków, in Nazi-occupied Poland. In Plaszow-Kraków, Alice was in charge of a work detail on the Camp Street (Lager Strasse) and was known for her viciousness.

In early January 1945, Orlowski was one of the SS women posted on the death march to Auschwitz-Birkenau and it was during this time that her behaviour, previously noted as being brutal and sadistic, became more humane. On the death march in mid-January 1945 from Auschwitz to Loslau, Orlowski gave comfort to the inmates, and even slept alongside them on the ground outside. She also brought water to those who were thirsty.[3] It is unknown why her attitude changed, but some speculate that she sensed the war was almost over and she would soon be tried as a war criminal. Orlowski eventually ended up back at Ravensbrück as a guard.

After the war ended in May 1945, Orlowski was captured by Soviet forces and extradited to Poland to stand trial for war crimes. The “picture book SS woman” stood accused at the Auschwitz Trial in 1947. She was sentenced to life imprisonment, but was released in 1957 after serving only 10 years. In 1975, West Germany tracked Orlowski down, and placed her on trial in the Third Majdanek Trial.

28 year old Vera Salvequart was born on the 26th of November 1919 in Wonotsch in Czechoslovakia and had trained as a nurse.  She had also served several periods in prison for having relationships with Jewish men. She had not been an SS guard, but rather a prisoner herself in Ravensbrück. She was sent to KZ Ravensbrück in December 1944 and as a Kapo worked as a nurse in the camp’s hospital wing. Here she was said to have administered poison in form of a white powder to some 50 of the patients, of whom 12 died.  She claimed to have stolen plans for the V2 rocket and passed these to Britain.
Vera Salvequart petitioned the King for a reprieve in view of her passing secrets to the British. She was granted a stay while this was considered but the Royal prerogative of mercy was withheld and on Thursday the 26th of June 1947 she followed the other three to the gallows.  She was the first of thirteen prisoners to be hanged that day by Albert Pierrepoint, assisted by Regimental Sergeant Major Richard Anthony O’Neill, the execution being carried out at 9.03 am.  Her body was later buried in the Wehl cemetery in Hameln. 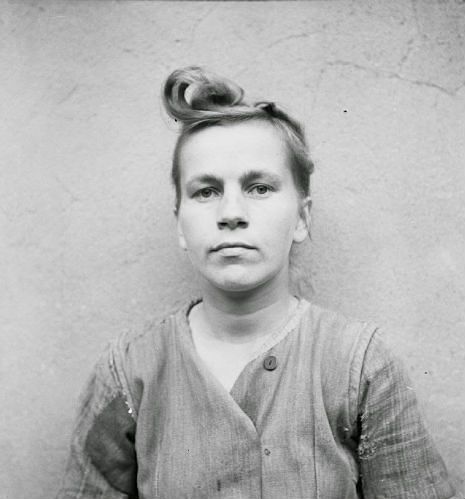 Elisabeth Volkenrath,  a former hairdresser  who hanged prisoners and was known as the most hated woman at Belsen

Volkenrath, née Mühlau, was an unskilled worker when she volunteered for service in a concentration camp. She started in October 1941 at Ravensbrück concentration camp as a simple Supervisor. In March 1942, she went to Auschwitz Birkenau where she worked in the same function as at Ravensbrück. At Auschwitz, she met SS-Rottenführer Heinz Volkenrath, who had worked there since 1941 as SS-Blockführer. They married in 1943. Elisabeth Volkenrath participated in the selection of prisoners for the gas chambers and in November 1944 was promoted to Oberaufseherin for all camp sections for female prisoners at Auschwitz.

Elisabeth Volkenrath was transferred to Bergen-Belsen when Auschwitz was closed. From February 1945, she was Oberaufseherin (supervising wardress) at Bergen-Belsen.

In April 1945, she was arrested by the British Army, and stood trial in the Belsen Trial. She was sentenced to death, and executed at Hamelin Prison by Albert  Pierrepoint December that year