Jehovah Witnesses were one of the groups of people hated by the Nazis and were killed by the hundreds, the numbers are unclear but are estimated to be between 1,000 and 2,500.

Nazi authorities denounced Jehovah’s Witnesses for their ties to the United States and derided the apparent revolutionary millennialism of their preaching that a battle of Armageddon would precede the rule of Christ on earth. They linked Jehovah’s Witnesses to “international Jewry” by pointing to Witness reliance on certain Old Testament texts.

Jehovah’s Witnesses could, however, escape persecution and personal harm by renouncing their religious beliefs. From 1935 Gestapo officers offered members a document to sign indicating renunciation of their faith, submission to state authority, and support of the German military.

From 1935 the authorities began sending hundreds of Jehovah’s Witnesses to concentration camps, where they were imprisoned with Communists, Socialists, other political prisoners and union members. Most of the Jehovah witnesses were conscientious objectors

August Dickmann was interned in the Sachsenhausen concentration camp in 1937. Three days after the outbreak of World War II in 1939, he was ordered to sign his military induction slip. When he refused, the camp commander contacted Heinrich Himmler,

Dickmann had refused to sign his military service record on religious grounds. The camp commander had asked permission to Himmler to make Dickmann an example for other conscientious objectors and Jehovah Witnesses.

Himmler agreed and on September 15 1939 after evening roll-call all 8,500 inmates were told to stay put in the main square.The camp staff forced the around 360 Jehovah’s Witnesses imprisoned in Sachsenhausen to stand in the front rows – where Dickmann’s brother Heinrich was also made to witness the shooting.

The execution squad was under command of Rudolf Höss, the future commandant of Birkenau. From his pistol August Dickmann received the coup de grace(merciful shot). There was no trial, no judge, no jury just an execution. 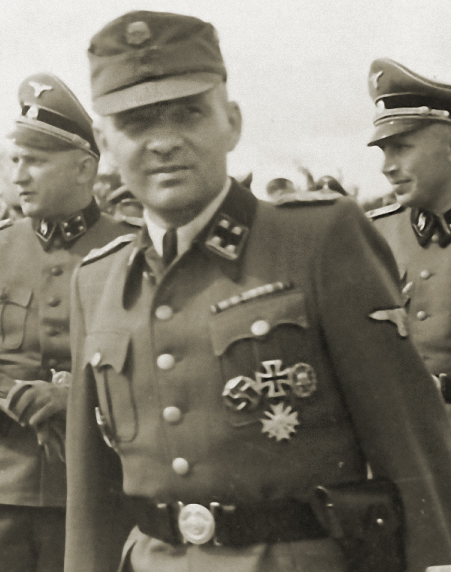 In the last days of the war, Himmler advised Höss to disguise himself among German Navy personnel. He evaded arrest for nearly a year. When captured on 11 March 1946 in Gottrupel , he was disguised as a gardener and called himself Franz Lang. 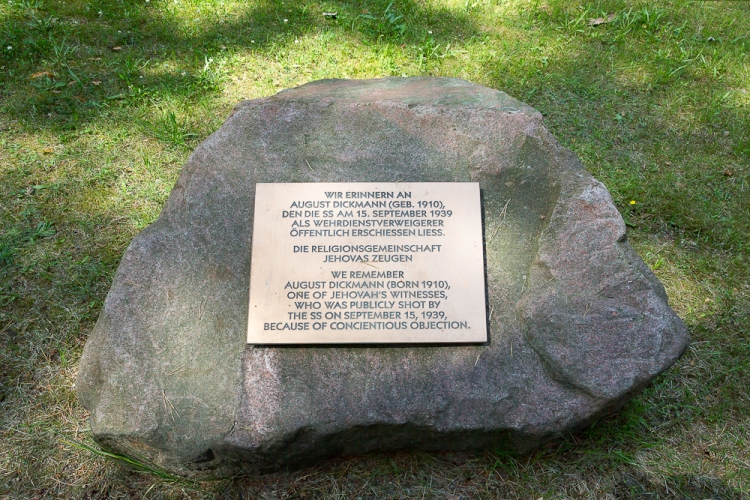 Not every Holocaust victim was Jewish, besides the Roma,Sinti, Homosexuals,Disabled, the Jehovah witnesses were also persecuted by the Nazi regime.

Unlike Jews and Romani who were persecuted on the basis of their ethnicity, Jehovah’s Witnesses could escape persecution and personal harm by renouncing their religious beliefs by signing a document indicating renouncement of their faith, submission to state authority, and support of the German military.

Gregor Wohlfahrt was born in Koestenberg-Velden in the part of Austria known as Carinthia on March 10 1896 . During World War I, he served in the Austro-Hungarian army and was wounded. Raised a Catholic, Gregor and his wife became Jehovah’s Witnesses during the late 1920s. Gregor supported his wife and six children by working as a farmer and quarryman.

The Austrian government banned Jehovah’s Witness missionary work in 1936. Gregor was accused of peddling without a license and briefly jailed. When Germany annexed Austria in 1938, Gregor led his congregation in a boycott of the plebiscite ratifying Austria’s union with Germany. Because of Gregor’s anti-Nazi stand, the mayor of his town had Gregor arrested on September 1, 1939.

He was sent to a military jail.,where he had to wait about three months, to be transferred from the Vienna army jail to Berlin. Where he was put before the war court, the Reichskriegsgericht, and there, he was sentenced with about 28 other Witnesses to death.

Gregor was sent to Berlin to be tried by a military court for opposing military service. He was sentenced to death. On December 7, 1939, Gregor was executed by guillotine in Berlin’s Ploetzensee Prison.

Authorities in Berlin, Germany, sent this notice to  Barbara Wohlfahrt, informing her of her husband Gregor’s execution on the morning of December 7, 1939. Although he was physically unfit to serve in the armed forces, the Nazis tried Wohlfahrt for his religious opposition to military service. As a Jehovah’s Witness, Wohlfahrt believed that military service violated the biblical commandment not to kill. On November 8, 1939, a military court condemned Wohlfahrt to beheading, a sentence carried out one month later in Ploetzensee prison in Berlin.

During the war, Gregor’s entire family was arrested for refusing to cooperate with the Nazis. Two of Gregor’s sons were killed: one son was beheaded in the Ploetzensee Prison, where Gregor had been beheaded in 1939; another son was shot. Gregor’s oldest son, Franz, refused to participate in military training, would not salute the Nazi flag, and was sentenced to five years of hard labor in a camp in Germany.

In addition to Gregor and two of his sons, other members of Gregor’s Jehovah’s Witness congregation were persecuted by the Nazis.

The eldest of the six children Born: January 18, 1920, Koestenberg-Velden, Austria.

HE was apprenticed to be a house painter and decorator. After Nazi Germany annexed Austria in 1938, like other Jehovah’s Witnesses HE refused to swear an oath to Hitler or to give the Hitler salute. Neighbors reported him to the police, but his boss protected him from arrest by saying that his work was needed.

Following his twentieth birthday, he refused to be inducted into the German army. In front of hundreds of recruits and officers he refused to salute the Nazi flag. He was arrested on March 14, 1940, and imprisoned. Later that year, he was sent to a penal camp in Germany. A new commander felt sorry for him; three times he saved him from execution between 1943 and 1945. He was impressed that Franz was willing to die rather than to break God’s command to love our neighbor and not kill.

Franz remained in Camp Rollwald Rodgau 2 until March 24, 1945. He was liberated by U.S. forces and returned to his home in Austria.

Gregor was the second of the six children: born July 24, 1921, Koestenberg-Velden, Austria.

Like his older brother, Franz, Gregor refused to be inducted into the German armed forces, following the Witnesses’ belief that military service violated God’s fifth commandment, “Thou shalt not kill.” Gregor was arrested. He was brought in chains before a military court in Berlin and sentenced to death on December 18, 1941. For Gregor, his father’s arrest and execution two years earlier on similar charges only strengthened his resolve to stand by his faith.

Gregor was executed by guillotine in Berlin’s Ploetzensee Prison on March 14, 1942. He was 20 years old.

Willibald was killed in 1945 while on the work detail digging trenches in western Germany. He was 17 years old.

Regardless what you think of the Jehovah Witnesses’s doctrine you can’t but admire that they were willing to die for what they believed in. This to me makes these 4 men bonafide heroes of WWII. They refused to comply with the Nazi ideology and paid the ultimate price.