On April 30, 1993, then-world No. 1 Monica Seles was playing Magdalena Maleeva in the Citizen Cup Tennis tournament, an undistinguished event in Germany. Seles was up 4-3 in the second set after having won the first, and appeared to be within minutes of taking the match and moving onward.

In 1990, Seles became the youngest ever French Open champion at the age of 16, when she defeated No. 1-ranked Steffi Graff. 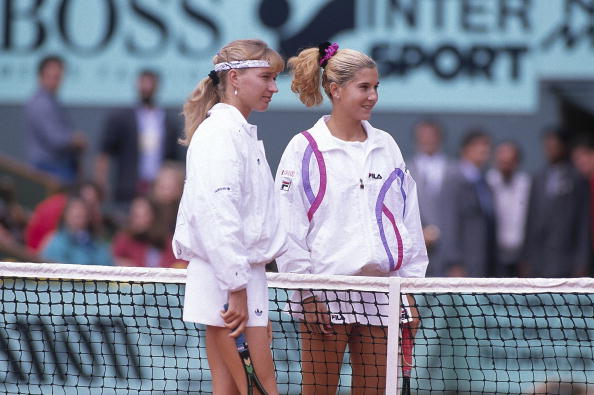 Having won her eighth Grand Slam title at the Australian Open earlier that year, the Yugoslav (of Serbian origin) was still only 19 when she played her quarter-final at Hamburg’s Rothenbaum in the day’s last match.

During a quarterfinal match with Magdalena Maleeva in Hamburg in which Seles was leading, Günter Parche, an obsessed fan of Steffi Graf, ran from the middle of the crowd to the edge of the court during a break between games and stabbed Seles with a boning knife between her shoulder blades, to a depth of 1.5 cm (0.59 inches). 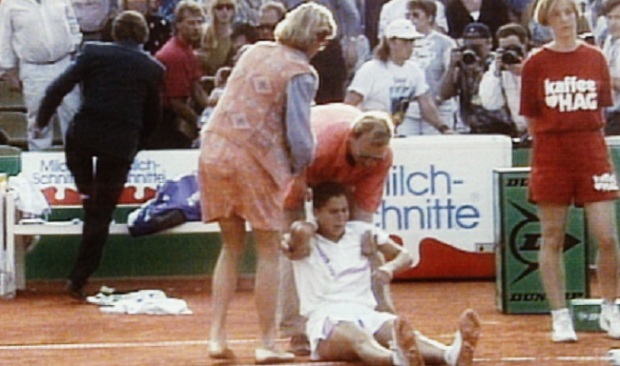 Her attacker had waited four days for his chance.His motive was that as an ardent admirer of Steffi Graf, he had been irritated that Seles had usurped the German in the world rankings.

After his arrest, he was found to be carrying 1000 deutschemarks ($650) and had a ticket to fly to Italy where Seles was registered to play at the Rome tournament the following week.

Parche was charged following the incident, but was not jailed because he was found to have a psychological condition, and was instead sentenced to two years’ probation and psychological treatment.

At his trial, Parche’s lawyer said his client lived in a fantasy world and his interest in Graf had reached an unhealthy level, fueling his hatred of Seles.

Incredibly, the tournament was not cancelled and Graf, ironically, went on to beat Spain’s Arantxa Sanchez Vicario in the final.

The incident prompted a significant increase in the level of security at tour events. At that year’s Wimbledon, the players’ seats were positioned with their backs to the umpire’s chair, rather than the spectators. Seles, however, disputed the effectiveness of these measures. She was quoted in 2011 as saying “From the time I was stabbed, I think the security hasn’t changed”.Seles vowed never to play tennis in Germany again, disenchanted by the German legal system. “What people seem to be forgetting is that this man stabbed me intentionally and he did not serve any sort of punishment for it… I would not feel comfortable going back. I don’t foresee that happening.” In a later article, Tennis.com reported that Parche was living in nursing homes due to additional health problem.

Monica Seles  lapsed into depression after her attack and her weight shot up by 30kg due to binge eating.She became a naturalized American citizen in 1994

She made her comeback in July 1995 in Atlantic City against Martina Navratilova and eventually won the Australian Open for the fourth time in 1996.