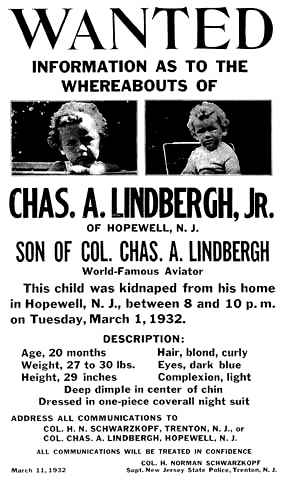 On the evening of March 1, 1932 Charles Augustus Lindbergh Jr., eldest son of aviator Charles Lindbergh and Anne Morrow Lindbergh, was abducted from the family home in the town of Highfields, in East Amwell, New Jersey.

Lindbergh, who became an international celebrity when he flew the first solo flight across the Atlantic Ocean in 1927, and his wife Anne discovered a ransom note demanding $50,000 in their son’s empty room. 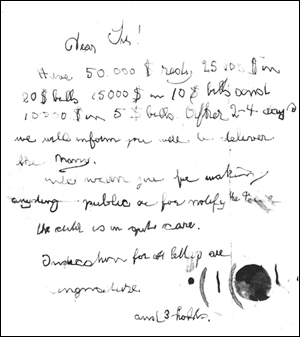 The kidnapper used a ladder to climb up to the open second-floor window and left muddy footprints in the room.

The Lindberghs were inundated by offers of assistance and false clues. Even Al Capone offered his help from prison. For three days, investigators found nothing and there was no further word from the kidnappers. Then, a new letter showed up, this time demanding $70,000.

The ransom was packaged in a wooden box that was custom-made in the hope that it could later be identified. The ransom money included a number of gold certificates – gold certificates were about to be withdrawn from circulation,and it was hoped this would draw attention to anyone spending them. The bills were not marked but their serial numbers were recorded.

The kidnappers eventually gave instructions for dropping off the money and when it was delivered, the Lindberghs were told their baby was on a boat called Nelly off the coast of Massachusetts. After an exhaustive search, however, there was no sign of either the boat or the child. Soon after, the baby’s body was discovered near the Lindbergh mansion. 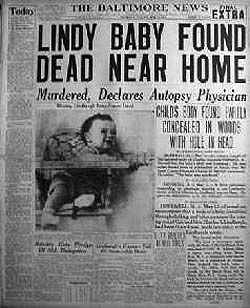 He had been killed the night of the kidnapping and was found less than a mile from home. The heartbroken Lindberghs ended up donating the mansion to charity and moved away

The kidnapping looked like it would go unsolved until September 1934, when a marked bill from the ransom turned up. The gas station attendant who had accepted the bill wrote down the license plate number because he was suspicious of the driver. It was tracked back to a German immigrant and carpenter, Bruno Hauptmann. When his home was searched, detectives found a chunk of Lindbergh ransom money.

Hauptmann claimed that a friend had given him the money to hold and that he had no connection to the crime. The resulting trial was a national sensation. The prosecution’s case was not particularly strong; the main evidence, besides the money, was testimony from handwriting experts that the ransom note had been written by Hauptmann. The prosecution also tried to establish a connection between Hauptmann and the type of wood that was used to make the ladder.

Still, the evidence and intense public pressure were enough to convict Hauptmann and he was electrocuted in 1935. In the aftermath of the crime—the most notorious of the 1930s—kidnapping was made a federal offense.