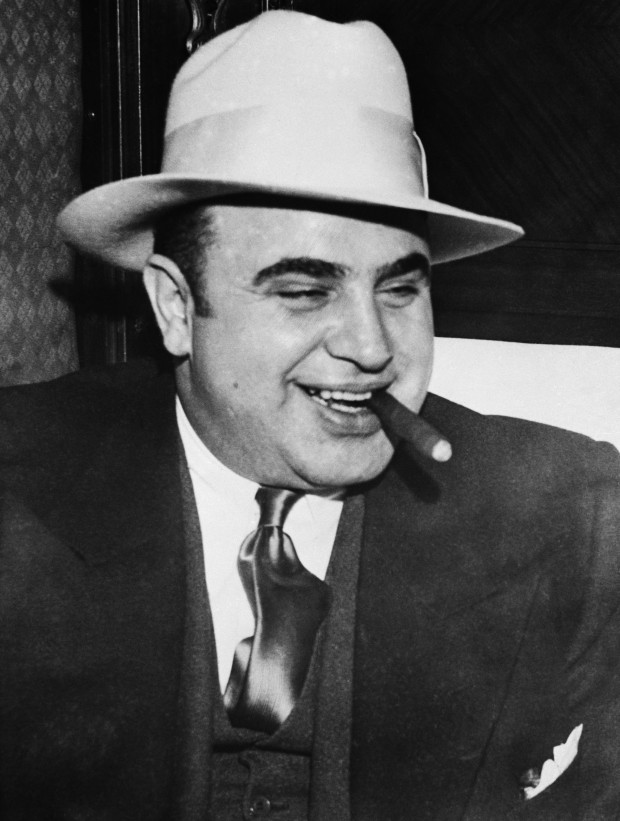 Al Capone was one of the most brutal criminals ever , there is no denying that. But as sometimes is the case that good men can do bad thing, the reverse is also true,bad men can do good things.

Al Capone started one of the first soup kitchens. The kitchen employed a few people, but fed many more. In fact, preceding the passage of the Social Security Act, “soup kitchens” like the one Al Capone founded, provided the only meals that some unemployed Americans had. They rose to prominence in the U.S. during the Great Depression. One of the first and obvious benefits of a soup kitchen was to provide a place where the homeless and poor could get free food and a brief rest from the struggles of surviving on the streets.

Al Capone was a gangster who made a fortune during the prohibition though bootlegging. He had a bit of the Robin Hood mystique by being charitable from some of the money he made running his criminal enterprise. Being a bootlegger (made/distributed illegal alcohol) during Prohibition (the period in the USA from 1920-1933 when alcohol was illegal) was seen as an acceptable, glamorous, even brave thing to do by the public. But it’s well-known that he had brutal methods murdering enemies, extorting local businesses, bribing public officials, intimidating witnesses.

Al Capone’s intentions were an effort to clean up his image. “120 000 meals are served by Capone Free Soup Kitchen” the Chicago Tribune headlined on December 1931. Al Capone’s soup kitchen became one of the strangest sight Chicagoans had ever seen. An army of ragged, starving men assembled three times a day beside a storefront at 935 South State Street, feasting on the largesse of Al Capone. Toasting his health. Telling the newspapers that Capone was doing more for the poor than the entire U.S. government. He was even offering some of them jobs. Capone milked his good works for all the favorable publicity they were worth. He came down and walked among the men, the wretched of the earth, offering a handshake, a hearty smile, and words of encouragement from the great Al Capone. 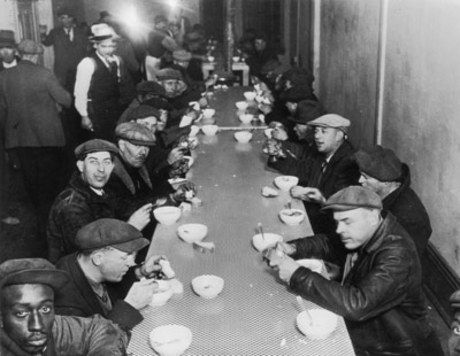 During November and December, Al Capone’s soup kitchen kept regular hours, serving breakfast, lunch and dinner. Thanksgiving Day 1930 was a particular public relations triumph for Capone. On that day he could boast that he fed more than 5,000 hungry men, women, and children with a hearty beef stew. The kitchen was demolished in the 1950s, but used to be located at the corner of 9th and State Street. The site is now a parking lot.

Without romanticizing it ,because the Mafia was and is a violent organisation, however they did use to operate under a strict code and even to the’Mob’ the Nazi regime was unacceptable.

The American government collaborated with the Mafia during WWII

During the early days of World War II, the U.S. Office of Naval Intelligence suspected that Italian and German agents were entering the United States through New York, and that these facilities were susceptible to sabotage. The loss of SS Normandie in February 1942 especially raised fears and suspicions in the Navy about possible sabotage in the Eastern ports. 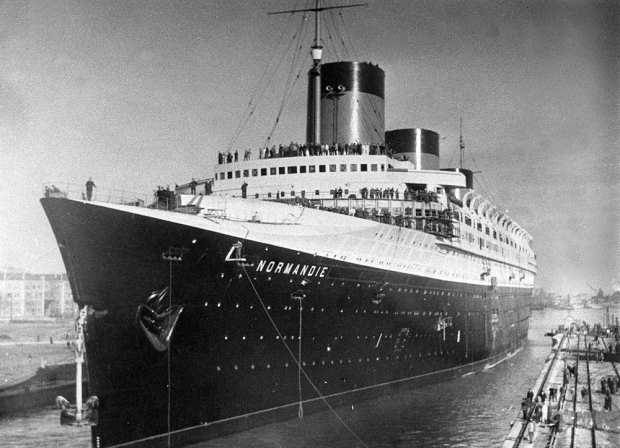 A Navy Intelligence Unit, B3, assigned more than a hundred agents to investigate possible Benito Mussolini’s supporters within the predominantly Italian-American fisherman and dockworker population on the waterfront. Their efforts were fruitless as the dockworkers and fishermen in the Italian Mafia-controlled waterfront were tight-lipped and distant to strangers.The Navy contacted Meyer Lansky, a known associate of Salvatore C. Lucania and one of the top non-Italian associates of the Mafia,about a deal with the Mafia boss Lucania. 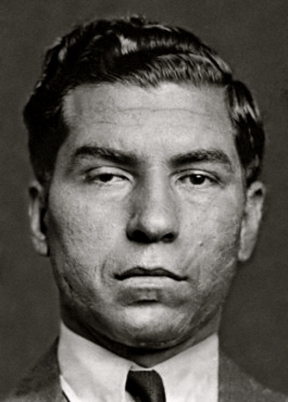 Lucania, also known as Lucky Luciano, was one of the highest-ranking Mafia both in Italy and the US and was serving a 30 to 50 years sentence for compulsory prostitution in the Meyer Lansky To facilitate the negotiations, the State of New York moved Luciano from the Clinton prison to Great Meadow Correctional Facility, which is much closer to New York City.

The State of New York, Luciano and the Navy struck a deal in which Luciano guaranteed full assistance of his organization in providing intelligence to the Navy. In addition, Luciano associate Albert Anastasia—who controlled the docks and ran Murder, Inc.—allegedly guaranteed no dockworker strikes throughout the war. 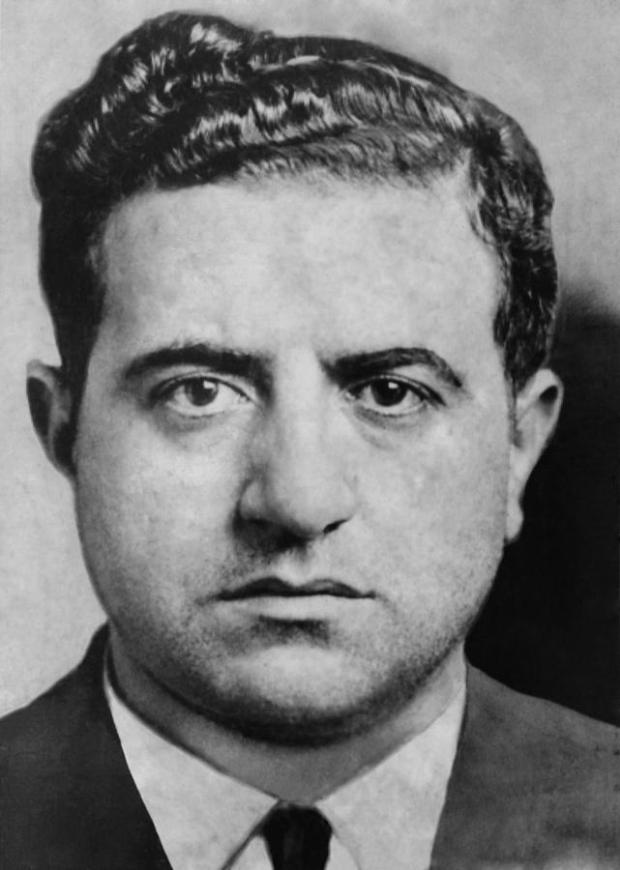 In return, the State of New York agreed to commute Luciano’s sentence.Luciano’s actual influence is uncertain, but the authorities did note that the dockworker strikes stopped after the deal was reached with Luciano.

In the summer of 1945, Luciano petitioned the State of New York for executive clemency, citing his assistance to the Navy. Naval authorities, embarrassed that they had to recruit organized-crime to help in their war effort, declined to confirm Luciano’s claim. However, the Manhattan District Attorney’s office validated the facts and the state parole board unanimously agreed to recommend to the governor that Luciano be released and deported immediately.On January 4, 1946, Governor Thomas E. Dewey, the former prosecutor who placed Luciano into prison, commuted Lucky Luciano’s sentence on the condition that he did not resist deportation to Italy.Dewey stated “Upon the entry of the United States into the war, Luciano’s aid was sought by the Armed Services in inducing others to provide information concerning possible enemy attack. It appears that he cooperated in such effort, although the actual value of the information procured is not clear.”Luciano was deported to his homeland Italy on February 9, 1946. There was a media hype of Luciano’s role after his deportation. The syndicated columnist and radio broadcaster Walter Winchell even reported in 1947 that Luciano would receive the Medal of Honor for his secret services.

Locked in prison, reading daily newspaper reports of Allied victories, Charlie Luciano got impatient. He wanted to be part of the action. If the U.S. government were grateful to him for his help against enemy agents at home, then they’d be knocked out if he got his hands really dirty and stepped forward for active duty. According to Meyer Lansky, he had it all worked out. He would volunteer to act as a scout or liaison officer for frontline troops. He’d put his neck on the line by being parachuted into action—behind enemy lines—and use his considerable influence to win the war for America. Lansky laughed, picturing him landing on top of a church spire. But Luciano couldn’t see the funny side—he was deadly serious.

The Allied invasion of Sicily, codenamed Operation Husky, was a major campaign of World War II, in which the Allies took the island of Sicily from the Axis powers (Italy and Nazi Germany). It was a large amphibious and airborne operation, followed by a six-week land campaign and was the beginning of the Italian Campaign.

Husky began on the night of 9/10 July 1943, and ended on 17 August. Strategically, Husky achieved the goals set out for it by Allied planners; the Allies drove Axis air, land and naval forces from the island and the Mediterranean sea lanes were opened for Allied merchant ships for the first time since 1941. Benito Mussolini was toppled from power in Italy and the way was opened for the invasion of Italy. Hitler “canceled a major offensive at Kursk after only a week, in part to divert forces to Italy,” resulting in a reduction of German strength on the Eastern Front of World War II. 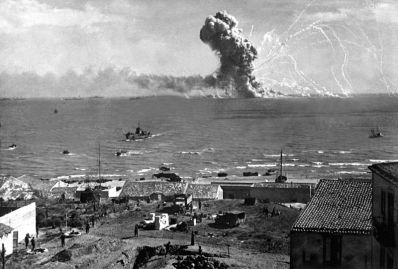 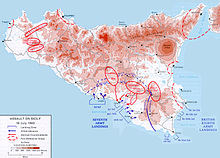 Italian Americans were very helpful in the planning and execution of the invasion of Sicily. The Mafia was involved in assisting the U.S. war efforts.Luciano’s associates found numerous Sicilians to help the Naval Intelligence draw maps of the harbors of Sicily and dig up old snapshots of the coastline.Vito Genovese, another Mafia boss, offered his services to the U.S. Army and became an interpreter and advisor to the U.S. Army military government in Naples. He quickly became one of AMGOT’s(Allied Military Government for Occupied Territories)most trusted employees.

Through the Navy Intelligence’s Mafia contacts from Operation Underworld, the names of Sicilian underworld personalities and friendly Sicilian natives who could be trusted were obtained and actually used in the Sicilian campaign. The Joint Staff Planners for the US Joint Chiefs of Staff(JSP) drafted a report titled Special Military Plan for Psychological Warfare in Sicily that recommended the “Establishment of contact and communications with the leaders of separatist nuclei, disaffected workers, and clandestine radical groups, e.g., the Mafia, and giving them every possible aid.” The report was approved by the Joint Chiefs of Staff in Washington on 15 April 1943.

Benito Mussolini, Il Duce was strongly anti-Mafia and from 1925 to 1929, extended the Prefect of Palermo more than a few liberties in a campaign to stamp out the Mafia. 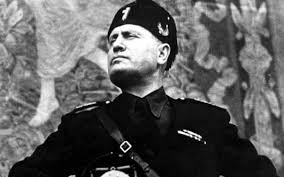 The methods used in the anti-Mafia initiative were brutal. Suspects were rounded up en masse. Those suspects who slipped through the dragnet often saw their property destroyed or their families taken hostage by the carabinieri – the Italian gendarmes. Civil liberties were effectively suppressed and police brutality was routine. The initiative ended in 1929, but by this point, plenty of mafiosi had fled Sicily to the United States and the few who remained were despised and mostly powerless.

This is probably more the reason why the Mafia collaborated with the American government to ensure that’ Il Duce’ was dealt a blow as revenge of his war on the Mafia in Sicily and of course there was a substantiNeal Jewish element to the Mafia.

Nevertheless their efforts did contribute to the allied efforts during WWII.