Well actually not that much. All you do is you book a flight to DC, on board you write a letter to the President of the USA.

Once you land you take a limo to the White House and drop the letters off.

Well that’s what Elvis did and it worked out for him.

Elvis was traveling with some guns and his collection of police badges, and he decided that what he really wanted was a badge from the federal Bureau of Narcotics and Dangerous Drugs back in Washington. “The narc badge represented some kind of ultimate power to him,” Priscilla Presley would write in her memoir, Elvis and Me. “With the federal narcotics badge, he believed he could legally enter any country both wearing guns and carrying any drugs he wished.

It all started a few days before the photo was taken. In December of 1970, Elvis Presley spent $100,000 on Christmas presents — 32 handguns and 10 Mercedes-Benzes. His wife, Priscilla, and his father both reprimanded the king, telling him that maybe $100,000 was a little much to spend all at once.

So, naturally, Elvis needed to get some space from all that negativity and did what anyone would do. He took his presents and hopped on the next available flight out of Memphis, and headed to Washington D.C. Then, he got bored and hopped on another flight to Los Angeles.

After just one day in Los Angeles, Elvis asked Schilling to fly with him back to the capital. “He didn’t say why,” Schilling recalls, “but I thought the badge might be part of the reason.”

On the red-eye to Washington, Elvis scribbled a letter to President Nixon. “Sir, I can and will be of any service that I can to help the country out,” he wrote. All he wanted in return was a federal agent’s badge. “I would love to meet you,” he added, informing Nixon that he’d be staying at the Washington Hotel under the alias Jon Burrows. “I will be here for as long as it takes to get the credentials of a federal agent.”

After they landed, Elvis and Schilling took a limo to the White House, and Elvis dropped off his letter at an entrance gate at about 6:30 a.m. Once they checked in at their hotel, Elvis left for the offices of the Bureau of Narcotics and Dangerous Drugs. He got a meeting with a deputy director, but not approval for a bureau badge.

Meanwhile, his letter was delivered to Nixon aide Egil “Bud” Krogh, who happened to be an Elvis fan. Krogh loved the idea of a Nixon-Presley summit and persuaded his bosses, including White House Chief of Staff Bob Haldeman, to make it happen. Krogh called the Washington Hotel and set up a meeting through Schilling.

Around noon, Elvis arrived at the White House with Schilling and bodyguard Sonny West, who’d just arrived from Memphis. Arrayed in a purple velvet suit with a huge gold belt buckle and amber sunglasses, Elvis came bearing a gift—a Colt .45 pistol mounted in a display case that Elvis had plucked off the wall of his Los Angeles mansion.

Which the Secret Service confiscated before Krogh escorted Elvis—without his entourage—to meet Nixon.

“When he first walked into the Oval Office, he seemed a little awe-struck,” Krogh recalls, “but he quickly warmed to the situation.”

While White House photographer Ollie Atkins snapped photographs, the president and the King shook hands. Then Elvis showed off his police badges.

Nixon’s famous taping system had not yet been installed, so the conversation wasn’t recorded. But Krogh took notes: “Presley indicated that he thought the Beatles had been a real force for anti-American spirit. The President then indicated that those who use drugs are also those in the vanguard of anti-American protest.”

“I’m on your side,” Elvis told Nixon, adding that he’d been studying the drug culture and Communist brainwashing. Then he asked the president for a badge from the Bureau of Narcotics and Dangerous Drugs.

“Can we get him a badge?” Nixon asked Krogh.

Krogh said he could, and Nixon ordered it done.

Elvis was ecstatic. “In a surprising, spontaneous gesture,” Krogh wrote, Elvis “put his left arm around the President and hugged him.”

Before leaving, Elvis asked Nixon to say hello to Schilling and West, and the two men were escorted into the Oval Office. Nixon playfully punched Schilling on the shoulder and gave both men White House cuff links.

“Mr. President, they have wives, too,” Elvis said. So Nixon gave them each a White House brooch.

After Krogh took him to lunch at the White House mess, Elvis received his gift—the narc badge. 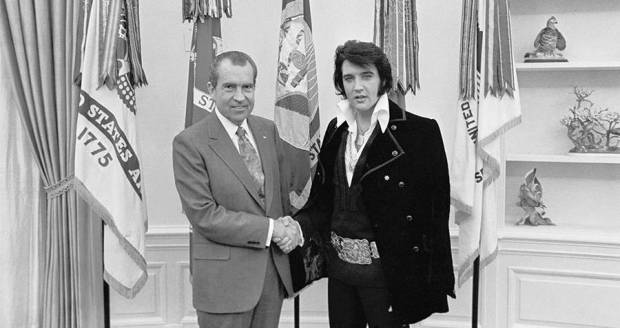