This is a bit of a deviation of my usual blogs but Phil Bloom has a significant cultural meaning to the Netherlands .The name Phil Bloom will mean very little to people outside of the Netherlands. She is an artist and actress

On July 28,1967 she caused quite some controversy and a scandal. She was the first person to appear completely nude on Dutch television. The show was called Hoepla and was broadcast by the broadcaster VPRO.

It was made by and for a teenage audience (the post-World War II generation), at a time (the early 1960s) when Dutch culture was one of “boredom and obedience”

In the opening sequence of Hoepla 1, during a performance by rock musician Teddy Lee J, who performed his song I am a Sexman., Phil Bloom is seen walking around the set, naked except for a few wreaths of plastic flowers. VPRO was heavily criticized for the show During a sketch, in the second episode , Phil is reading a newspaper, sitting on a sofa; she reads, out loud, a review of the first episode of Hoepla that appeared in the Catholic daily Trouw and when she lowers the newspaper she is shown to be completely naked. But photos of the second episode are leaked prior to the broadcast. Therefore the show is recorded again The second installment, which made Hoepla infamous. Seven minutes into Hoepla 2, Bloom appears sitting in a chair, naked, reading aloud a newspaper article titled “VPRO Cuts Out Naked Phil.”2. This time the newspaper was Het Vrije Volk, which was connected to the Social Democrats The text reported that the episode had been recorded a week earlier and that VPRO had guaranteed that Phil Bloom would not appear naked on screen. After Bloom finishes the article, she lowers the newspaper so that her entire (unadorned) body remains on screen for 38 seconds. The address to which viewers could send complaints appears in the final seconds of the segment, superimposed over Bloom’s image. 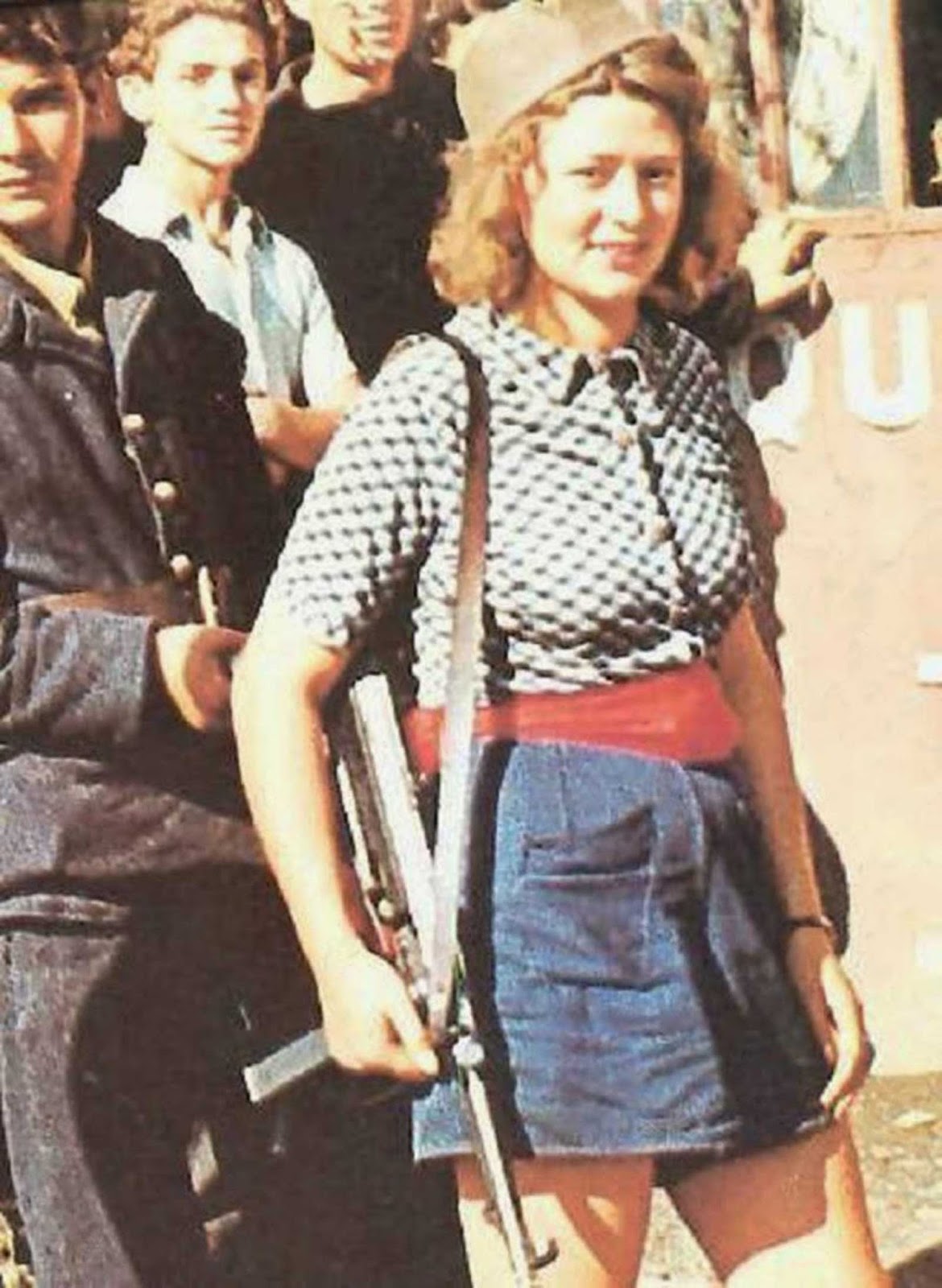 I know the title is not PC, but it reflects the reality because these women were sexy. They would give any man a run for their money. They were not to be messed with and they were lethal. Either as part of the resistance or armed forces they were a force to be reckoned with.

Honoring the women who fought and often gave their lives so that we now all enjoy our freedom.

The picture above is of Simone Segouin, also known by her nom de guerre Nicole Minet. When this photo was taken she was 18 years old. The girl had killed two Germans in the Paris fighting two days previously and also had assisted in capturing 25 German prisoners of war during the fall of Chartres. In 1944, at the height of the Nazi occupation of France, she joined the Francs-Tireurs et Partisans (Free-shooters and Partisans, or FTP) – a combat alliance made up of militant communists and French nationalists. Simone was very much in the latter camp. Her father was a huge inspiration – a decorated soldier who had fought in the Great War – and she was intensely proud of her country.

Simone went on to become a paediatric nurse in Chartres, where her wartime exploits made her hugely popular. Despite her swashbuckling war years, Simone was always aware of how difficult it had been for women to play a role in the Resistance. They made up little more than ten per cent of the force, and the majority were confined to non-combat roles. But nonetheless, their presence had helped force a shift in the way women were treated. 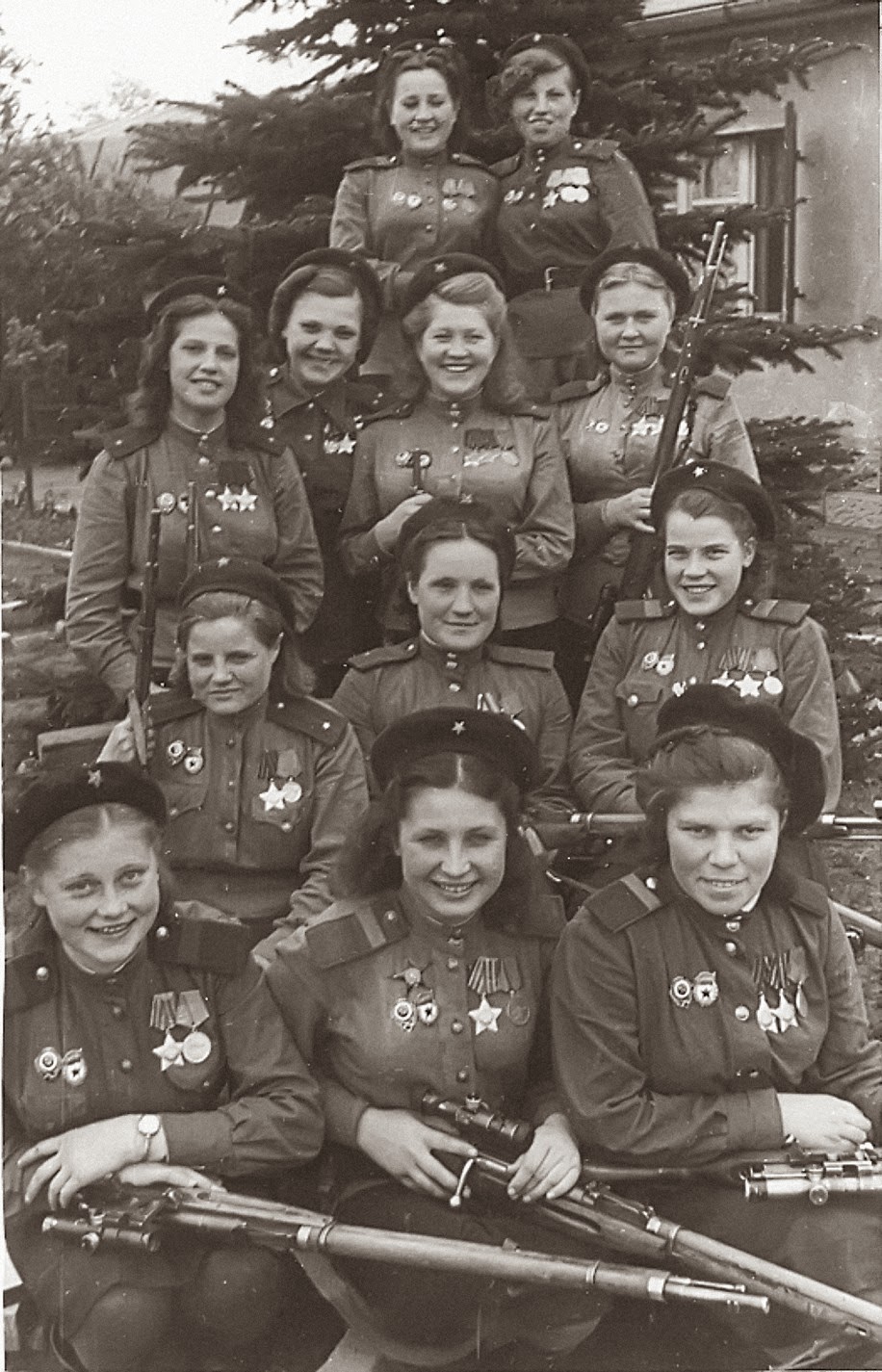 Roza Shanina was a Soviet sniper during World War II who was credited with fifty-nine confirmed kills, including twelve soldiers during the Battle of Vilnius. Shanina volunteered for the military after the death of her brother in 1941 and chose to be a marksman on the front line. Praised for her shooting accuracy, Shanina was capable of precisely hitting enemy personnel and making doublets (two target hits by two rounds fired in quick succession). 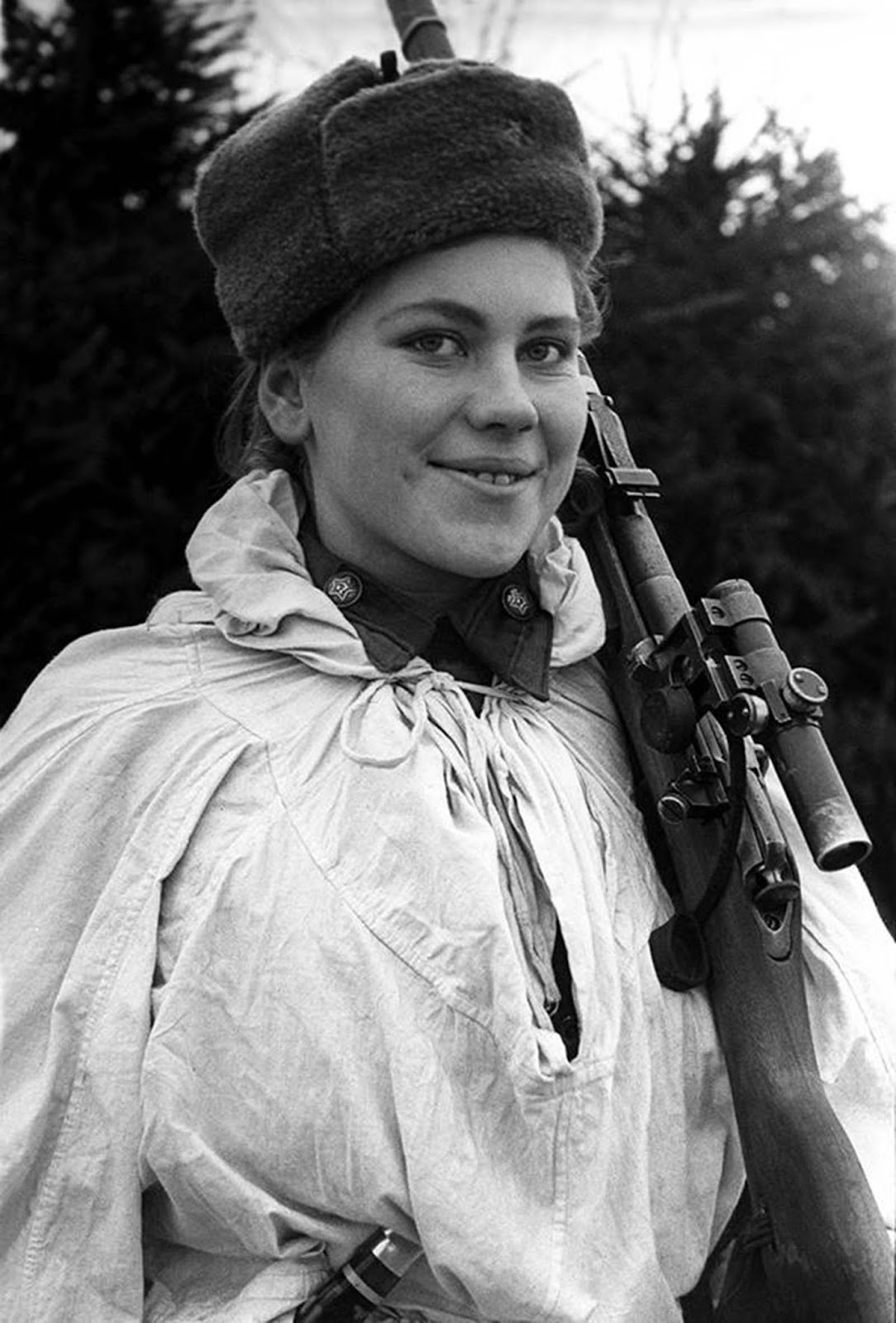 On 27 January 1945 Shanina was severely injured while shielding a wounded artillery officer. She was found by two soldiers disemboweled, with her chest torn open by a shell fragment.Despite attempts to save her, Shanina died the following day near the Richau estate (later a Soviet settlement of Telmanovka). 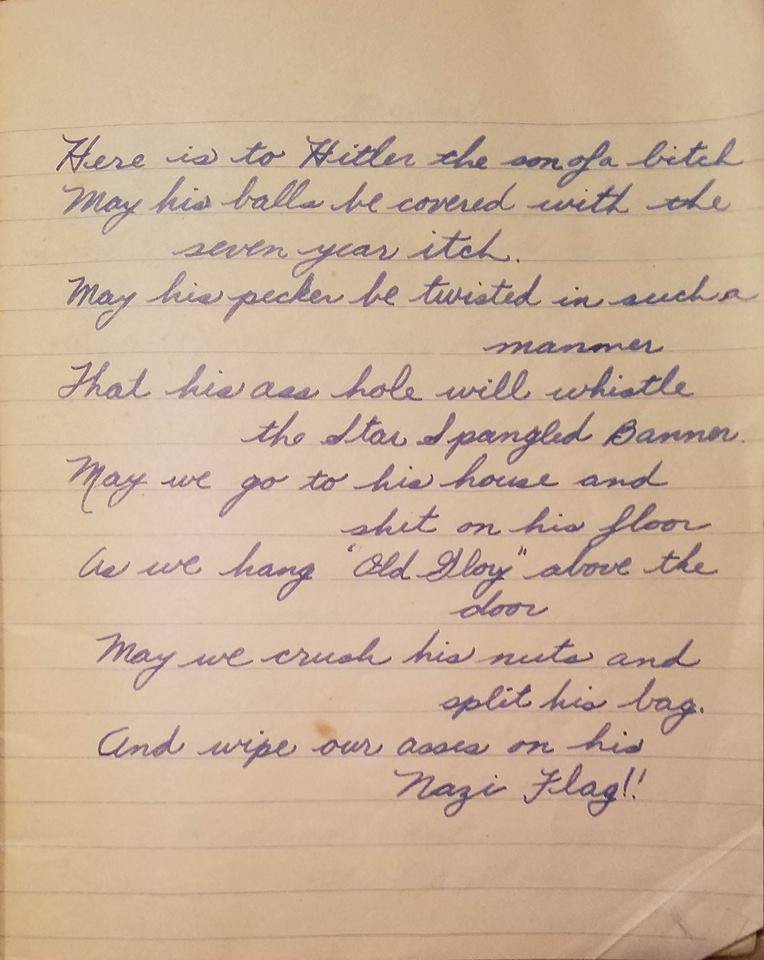 Mrs. Paul Titus, 77-year-old air raid spotter of Bucks County, Pennsylvania, carries a gun as she patrols her beat, on December 20, 1941. Mrs. Titus signed-up the day after the Pearl Harbor attack. “I can carry a gun any time they want me to,” she declared. 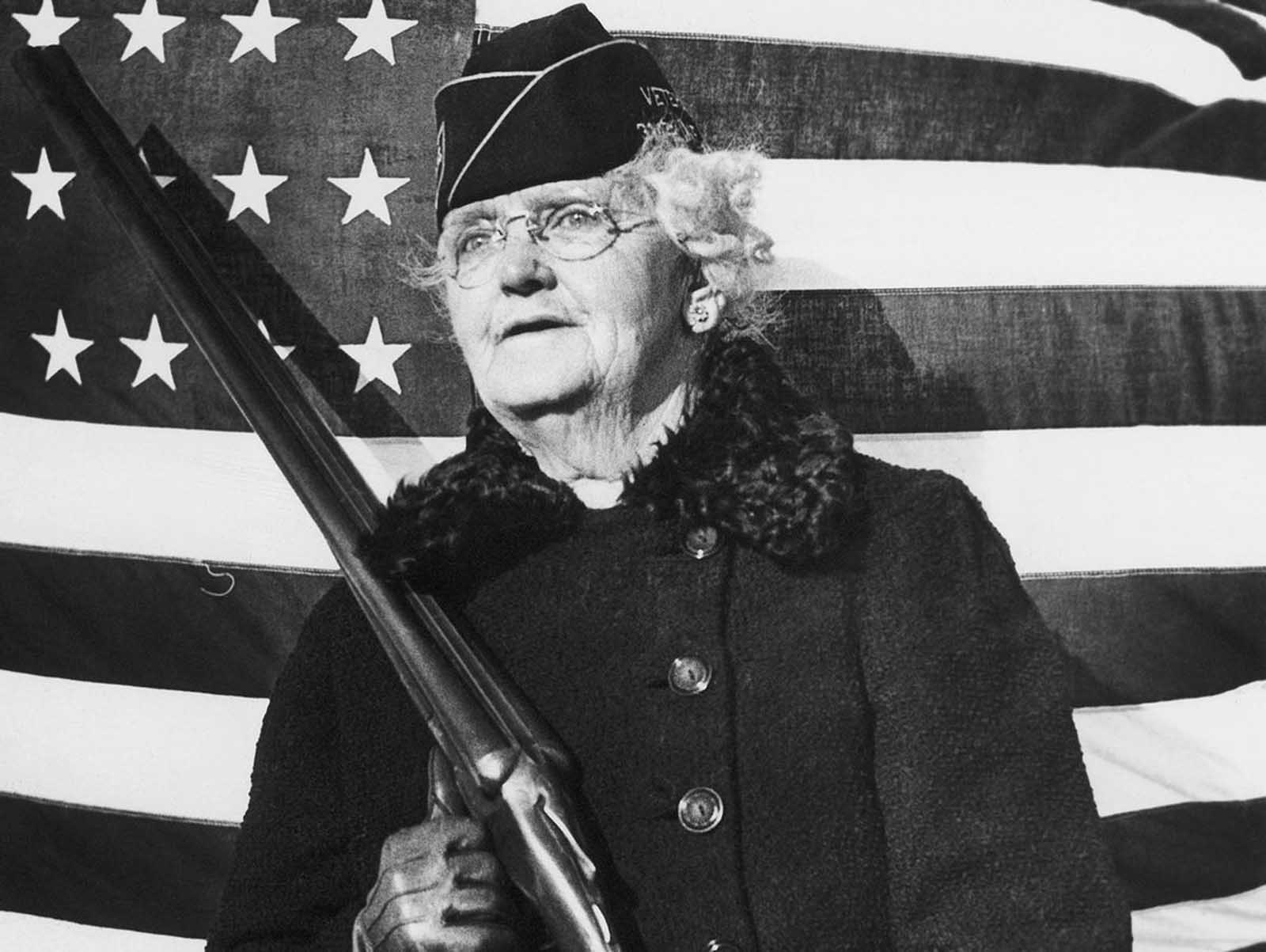 Ack-Ack Girls, members of the Auxiliary Territorial Service (ATS), run to action at an anti-aircraft gun emplacement in the London area on May 20, 1941 when the alarm is sounded. 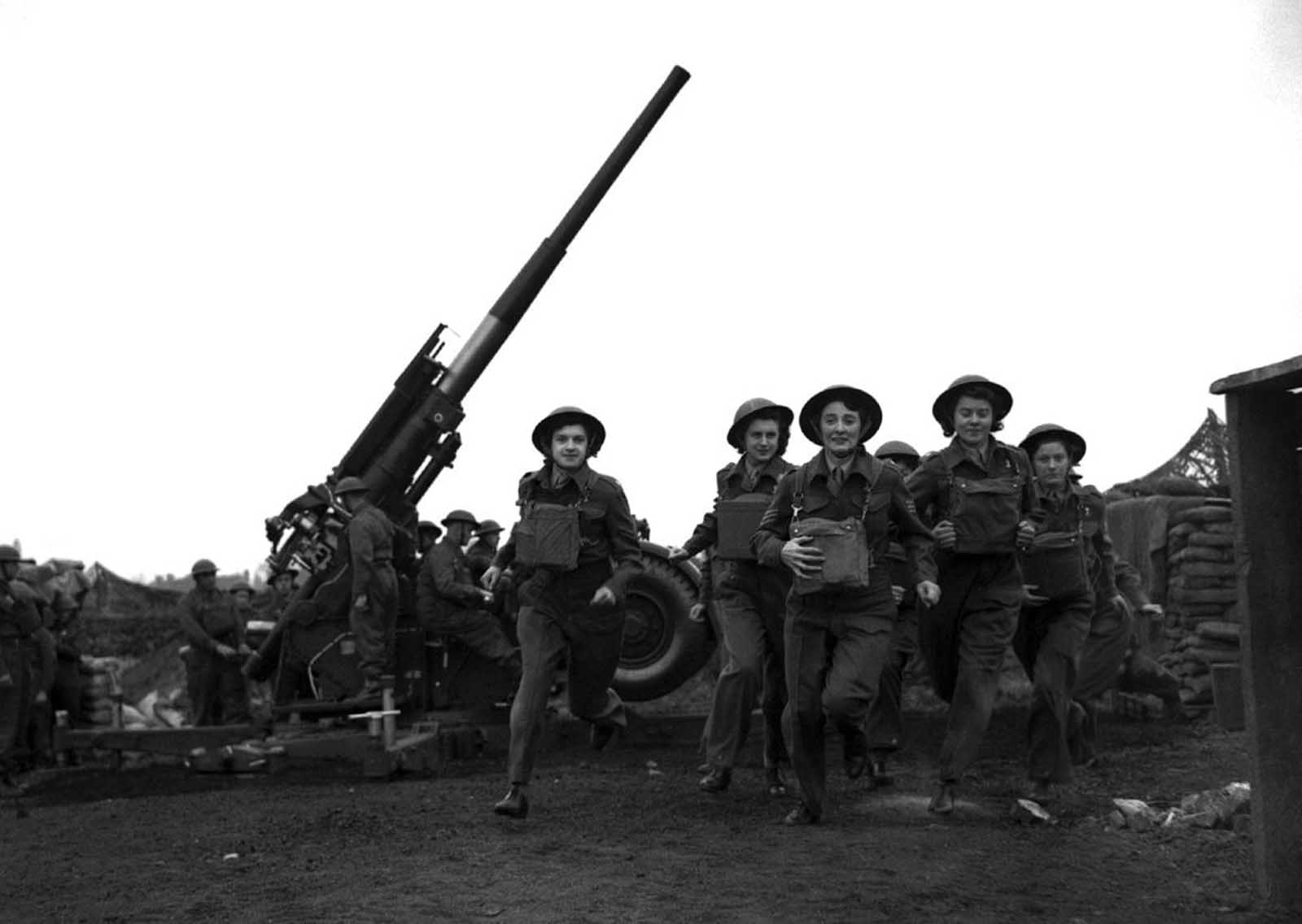 Little known to the outside world, although they have been fighting fascist regimes since 1927, the Italian “Maquis” carry on their battle for freedom under the most hazardous conditions. Germans and fascist Italians are targets for their guns; and the icy, eternally snow-clad peaks of the French-Italian border are their battlefield. This school teacher of the Valley of Aosta fights side-by-side with her husband in the “White Patrol” above the pass of Little Saint Bernard in Italy, on January 4, 1945. 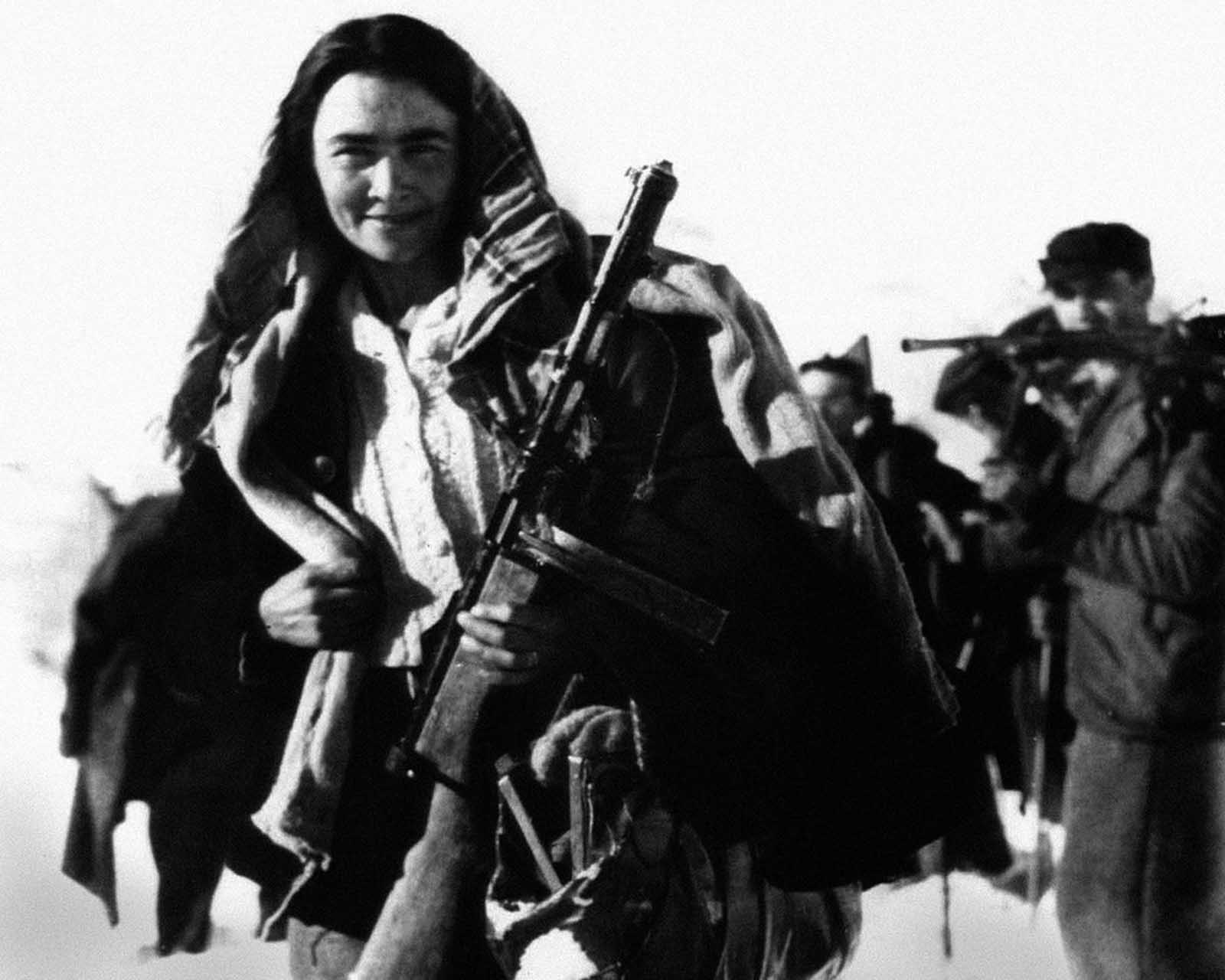 Specially chosen airwomen were being trained for police duties in the Women’s Auxiliary Air Force (WAAF). They had to be quick-witted, intelligent and observant They attended an intensive course at the highly sufficient RAF police school – where their training runs parallel with that of the men. Keeping a man “in his place” – A WAAF member demonstrates self-defense on January 15, 1942. 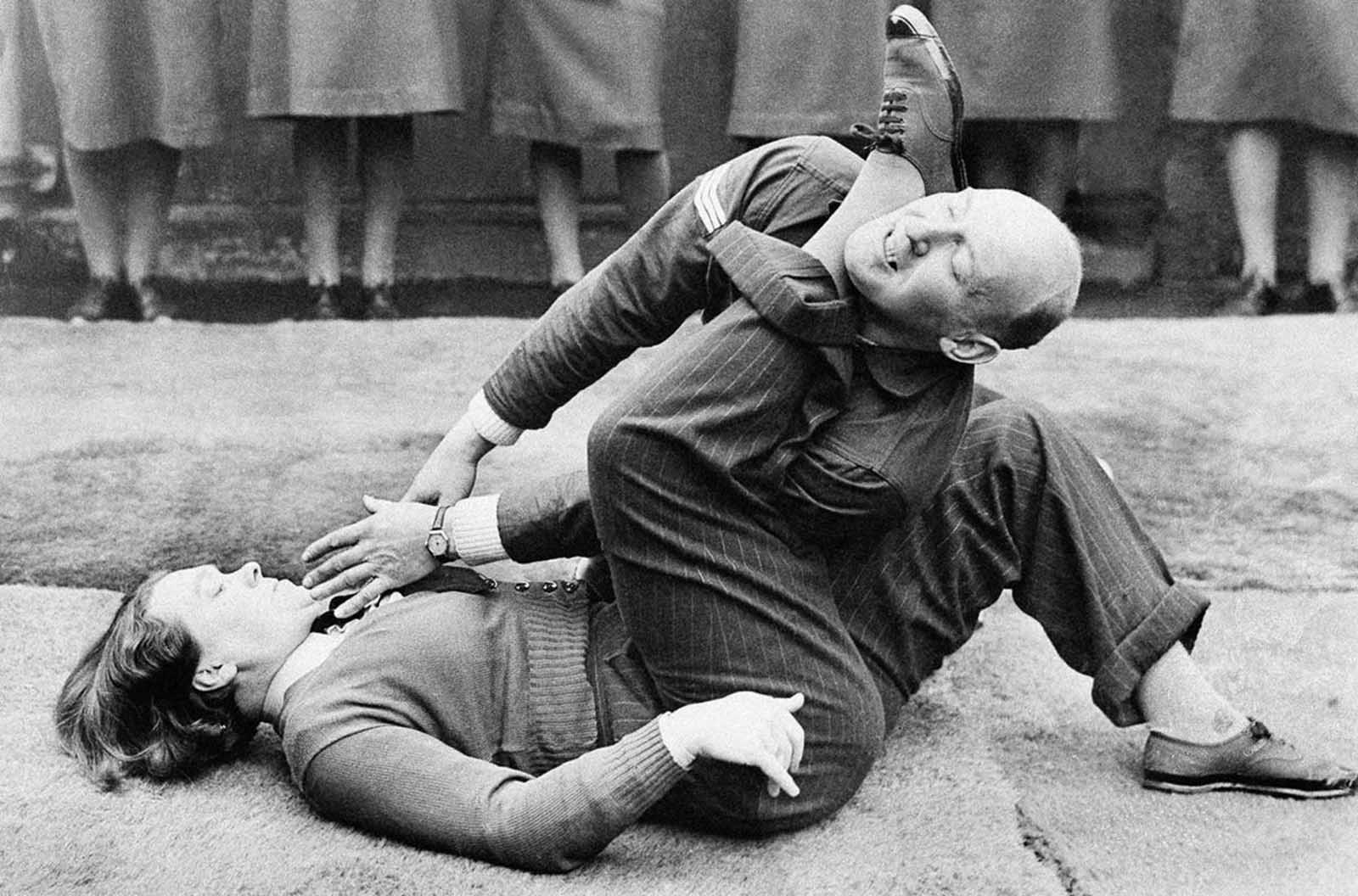 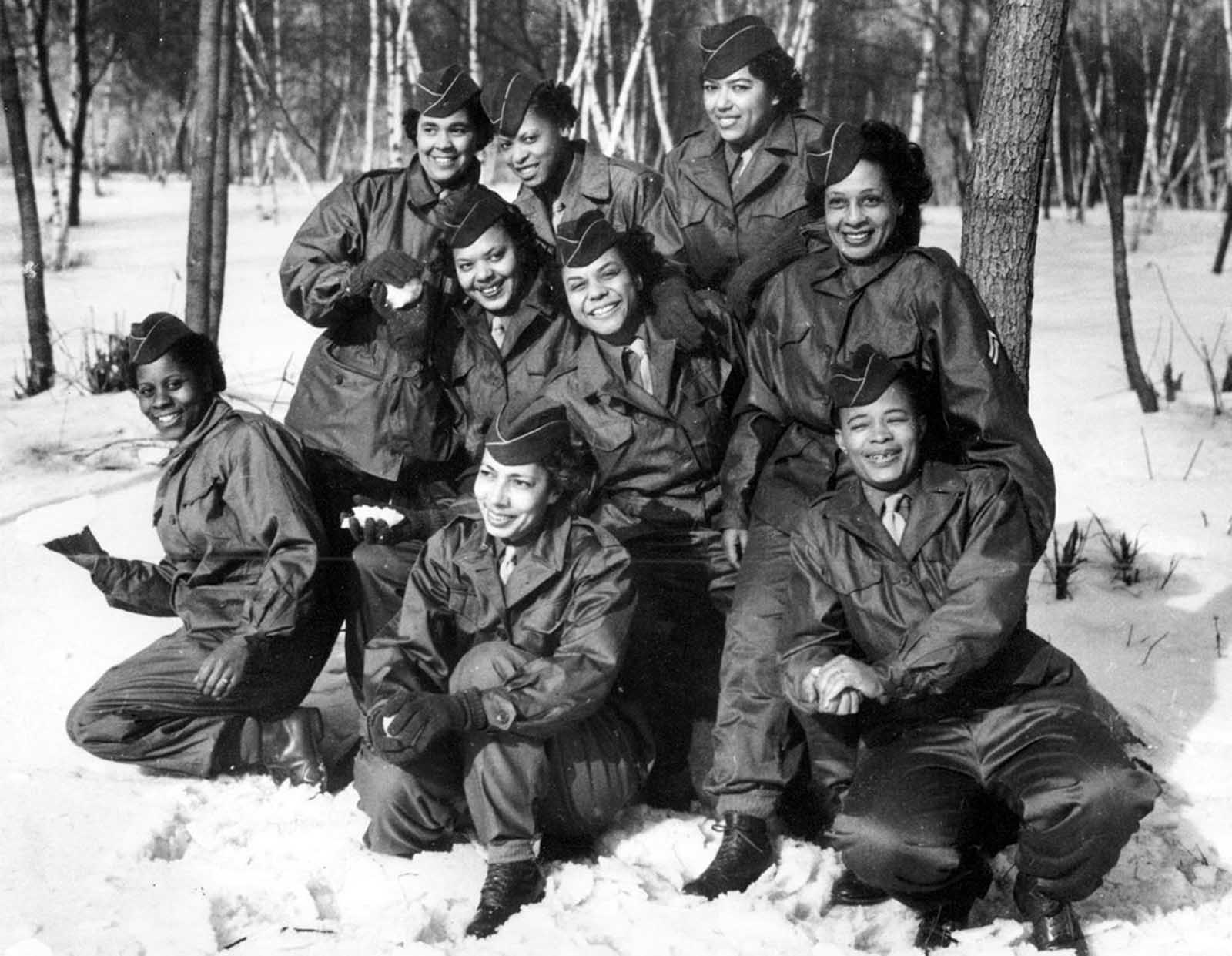 Symbolic of the defense of Sevastopol, Crimea, is this Russian female sniper, Lyudmila Pavlichenko, who, by the end of the war, had killed a confirmed 309 Germans — the most successful female sniper in history. 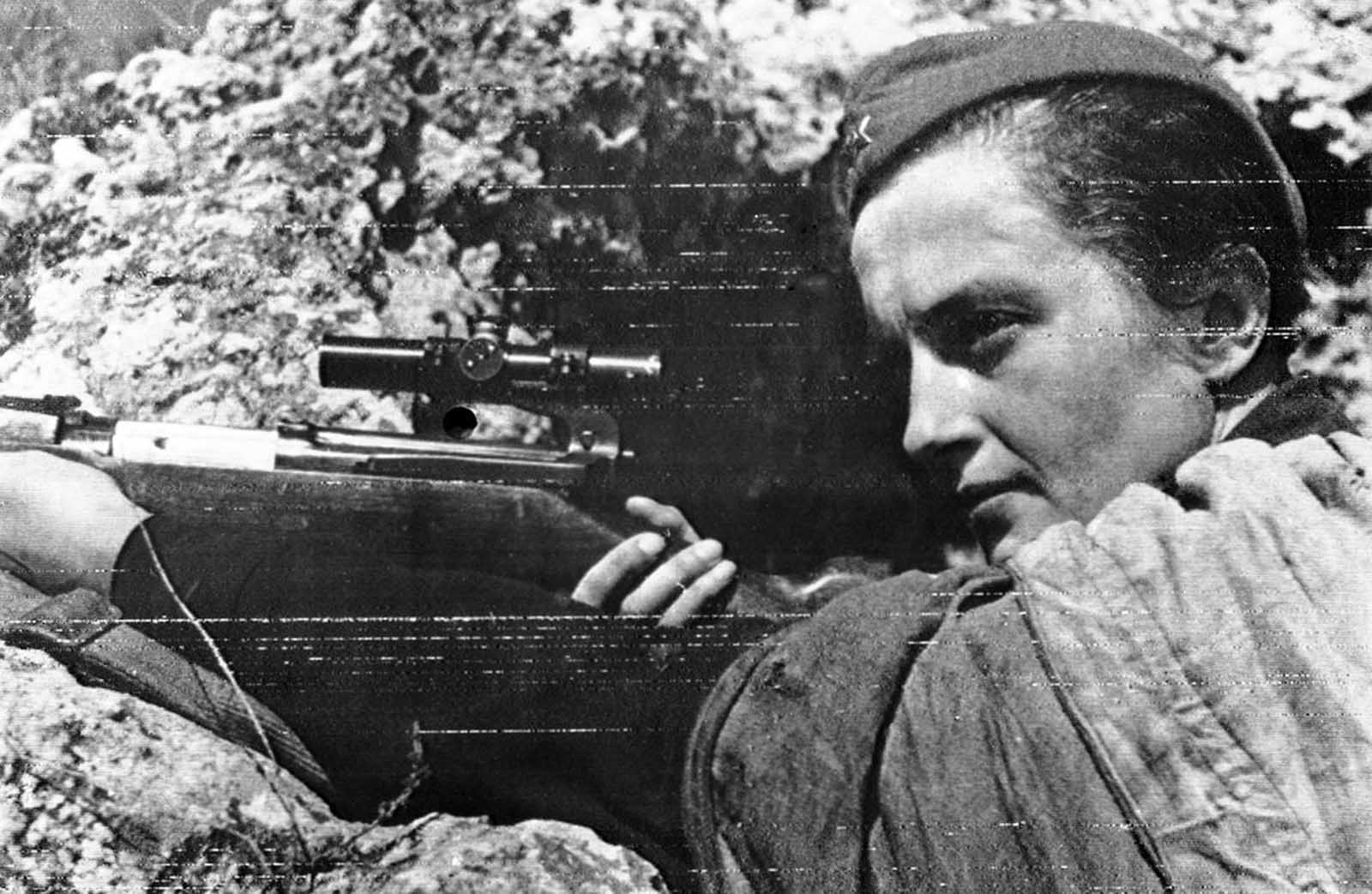