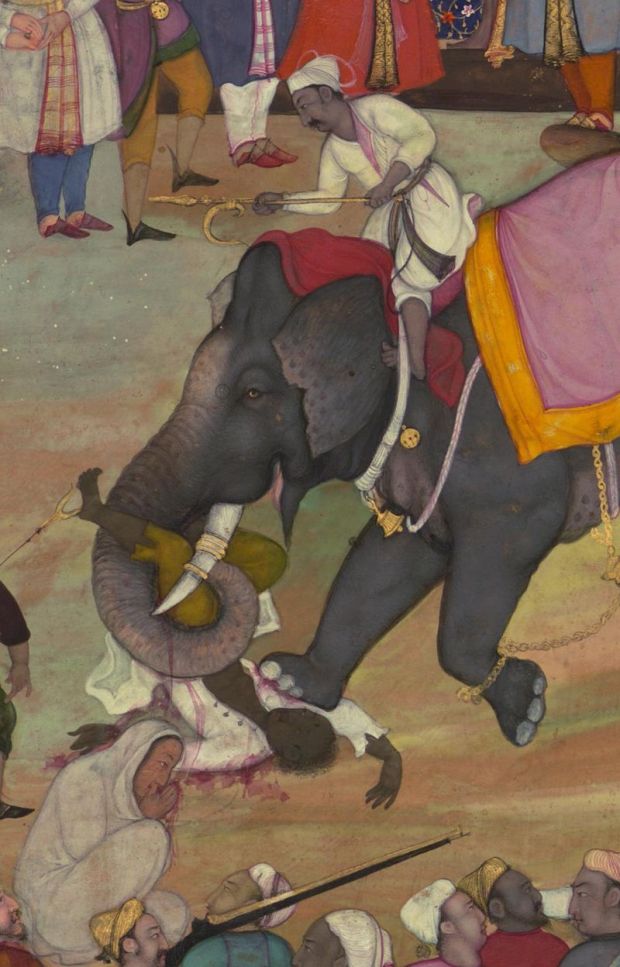 Execution by elephant was a common method of capital punishment in South and Southeast Asia, particularly in India, where Asian elephants were used to crush, dismember, or torture captives in public executions. The animals were trained and versatile, able to kill victims immediately or to torture them slowly over a prolonged period. Most commonly employed by royalty, the elephants were used to signify both the ruler’s absolute power and his ability to control wild animals.

The sight of elephants executing captives both horrified and attracted the interest of European travelers, and was recorded in numerous contemporary journals and accounts of life in Asia. The practice was eventually suppressed by the European empires that colonised the region in the 18th and 19th centuries. While primarily confined to Asia, the practice was occasionally adopted by Western powers, such as Ancient Rome and Carthage, particularly to deal with mutinous soldiers.

Elephants have played a number of important roles in human history. In some cultures, the elephant is a revered creature. In Buddhism, for example, the vivid dream of Buddha’s mother which foretold her pregnancy had a white elephant in it.  Other cultures used the elephant’s great strength and power in battle, or for huge construction projects. There are many examples of these activities – ranging from Hannibal’s crossing of the Alps with his 34 African elephants in 218 BC, to the use of these creatures in the construction of Angkor Wat in the 12th century AD. However, it is perhaps less well-known that elephants were also used as deadly executioners. 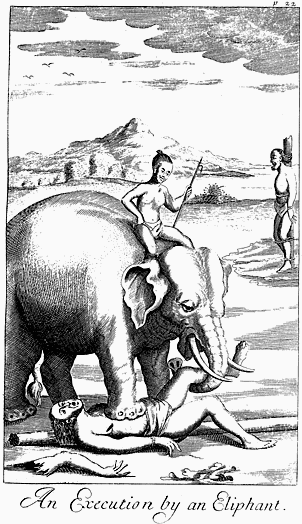 Execution by elephant was a form of capital punishment and a weapon of war for certain societies of the past. This method of punishment was occasionally used in the Western world, as several examples can be found in the ancient sources. For example, in the Historiae Alexandri Magni , the Roman historian Quintus Rufus Curtius wrote:

“Then Perdiccas, seeing them paralyzed and in his power, separated from the rest about thirty who had followed Meleager when he rushed forth from the first assembly which was held after the death of Alexander, and in the sight of the whole army cast them before the elephants. All were trampled to death by the feet of the beasts…”

Nevertheless, this was not a common method of execution in the West. On the other hand, execution by elephant was more frequently used in South and Southeast Asia, especially in India. This form of capital punishment is known also as gunga rao , and has been used since the Middle Ages.

The most common way that the execution by elephant was carried out was for the beasts to crush its victim to death with brute force. Apart from enemy soldiers, civilians who commit certain crimes could also be punished in this way. These crimes included theft, tax evasion and rebellion. There are many wild beasts that could be used to kill a criminal – tigers, lions, crocodiles, snakes, etc. Yet, the choice of the elephant shows that there was something unique about this creature.

Compared to many other wild animals, the elephant is considered to be a smart and easily trainable. In addition, elephants could also be taught to torture criminals, or to execute them slowly. As an example, an elephant could be commanded to break a criminal’s limbs before ending his suffering by crushing his skull. 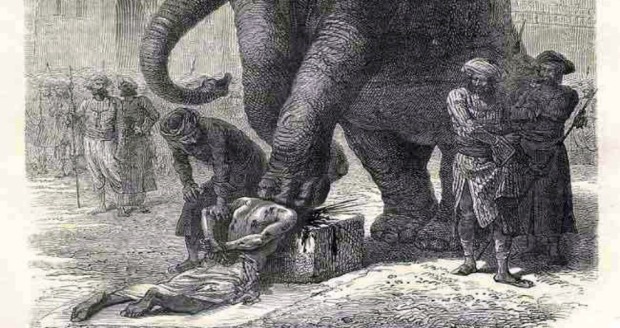 Another example can be found in the account of François Bernier, a French traveler who witnessed an execution by elephant in Delhi during the reign of the Mughals. According to the Frenchman, the elephants were trained to slice criminals to pieces with “pointed blades fitted to their tusks”. Furthermore, the training of elephants could be used as a means of demonstrating a ruler’s control over the forces of nature. 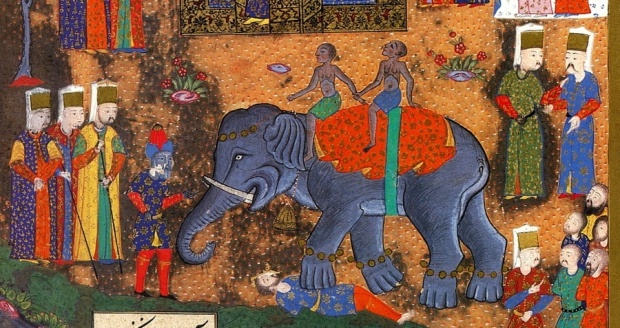 Apart from India, execution by elephant was also practiced in some other Asian countries. Like India, it was the elephant’s intelligence and brute force that were exploited to execute criminals. Yet, there were some variations in the method of execution. In neighboring Sri Lanka, for instance, elephants used during these events were said to have been fitted with sharp tips on their tusks. Instead of slicing their victims, the elephant would stab its victim, and then ‘rearrange’ its victim’s internal organs.

In the former Kingdom of Siam (now Thailand), elephants were trained to toss their victims into the air before crushing them to death. In the Kingdom of Cochinchina (southern Vietnam), on the other hand, criminals were tied to a stake, whilst an elephant would charge into them, and crush them to death. 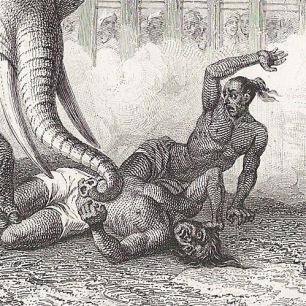 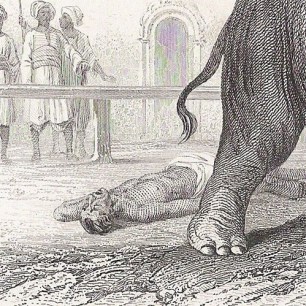 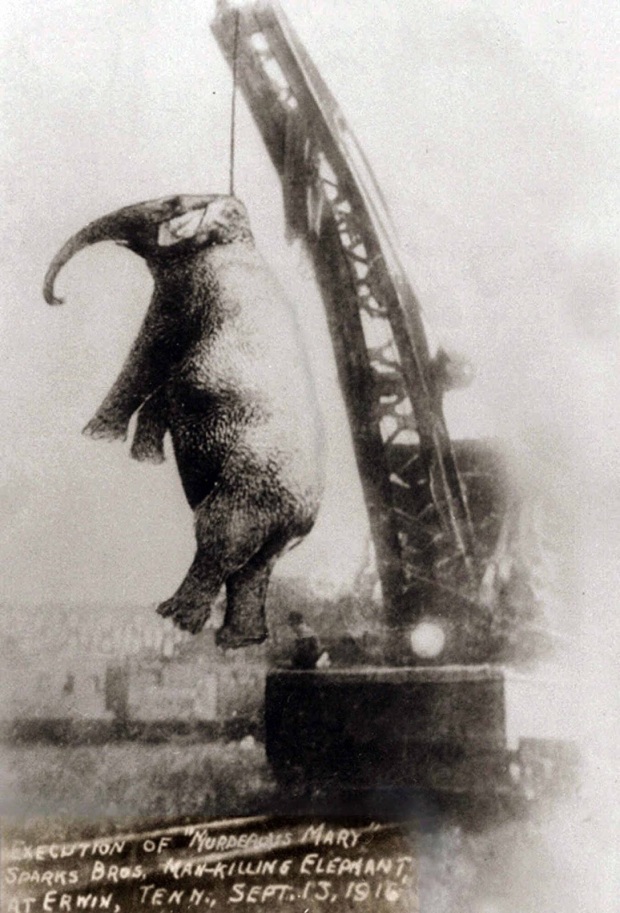 Mary was a five-ton Asian elephant, also known as Murderous Mary, who performed in the Sparks World Famous Shows circus. After killing a trainer in Kingsport, Tennessee, she was hanged in 1916. Her death is sometimes interpreted as a cautionary tale of circus animal abuse during the early 20th century. 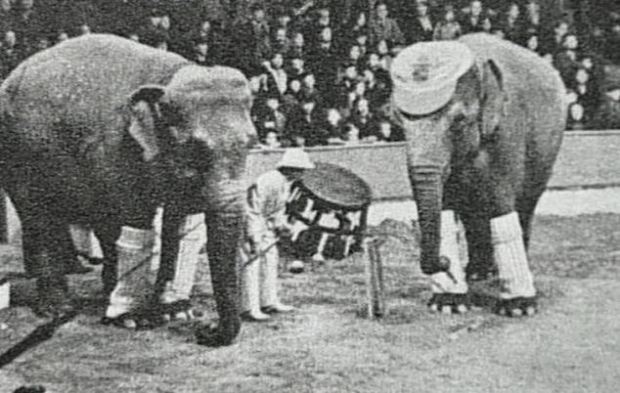 On September 12, 1916, a hobo named Walter Eldridge, nicknamed Red because of his rusty-colored hair, was hired as an assistant elephant trainer by the Sparks World Famous Shows circus. A drifter who had been with the circus only a day, he had no experience of handling elephants, but the only qualification required was the ability to wield an ‘elephant stick’ — a rod with a sharp spear at one end. Eldridge led the elephant parade riding on the top of Mary’s back; Mary was the star of the show, riding at the front. There have been several accounts of his death. One, recounted by W.H. Coleman who claimed to be a witness, is that he prodded her behind the ear with a hook after she reached down to nibble on a watermelon rind. She went into a rage, snatched Eldridge with her trunk, threw him against a drink stand and stepped on his head, crushing it. 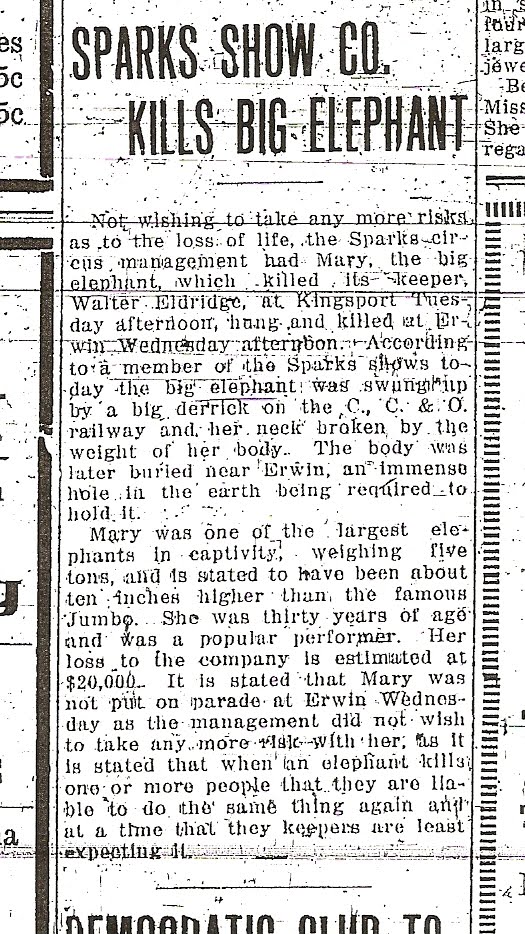 As the terrified spectators screamed and fled, a local blacksmith shot Mary with a pistol, unloading five rounds of ammunition into her thick hide to little effect. She stood still, suddenly calm again and seemingly oblivious both to the bullets and the commotion as the townsfolk encircled her with chants of “Kill the elephant, kill the elephant!”.

The circus owner, Charlie Sparks, reluctantly decided that the only way to quickly resolve the potentially ruinous situation was to kill the elephant in public. It was decided to hang the elephant by the neck from a railcar-mounted industrial crane. On the following day, a foggy and rainy September 13, 1916, Mary was transported by rail to Unicoi County, Tennessee, where a crowd of over 2,500 people (including most of the town’s children) assembled in the Clinchfield Railroad yard.

As she was led to the railway yard, Mary was followed by the circus’s other four elephants, each entwining their trunk in the tail of the animal in front just as they had done on countless parades. Charlie Sparks hoped that their presence would keep her compliant but, as a chain was placed around her neck at the “scaffold”, they trumpeted mournfully to her and he feared that she might try to run away. To stop this happening, one of her legs was tethered to a rail. No one thought to release it as the derrick whirred into action and, as she was hoisted into the air, there was an awful cracking noise, the sound of her bones and ligaments snapping under the strain. She had been raised no more than five feet when the chain around her neck broke, dropping her to the ground and breaking her hip.

The industrial crane was powered up again and this time Mary was raised high in the air, her thick legs thrashing and her agonized shrieks and grunts audible even over the laughter and cheers of those watching below. Finally she fell silent and hung there for half an hour before a local vet declared her dead. Her gruesome end is recorded in a photograph so horrifically surreal that some have suggested it must be a fake — but, all too sadly, its authenticity has been confirmed by other reports and photographs taken at the time.