I am always surprised how so many evil men live to an old age. The crimes they committed don’t seem to affect them in the slightest. But yet so many fled after the war, indicating they knew they had done wrong. For innocent people don’t run away.

Laszlo Csatary,  While serving as a senior police officer in Hungarian-occupied Slovakia in 1944, he organized the deportation of approximately 15,700 Jews to the Auschwitz death camp. In 1948, a Czechoslovak court convicted and sentenced him to death in absentia.

Csatary eluded authorities, fleeing Europe for Canada. He worked there as an art dealer until 1997, when Canadian authorities found out he had lied on his passport application and revoked his citizenship. He did not surface again until 2011, when he was spotted in Budapest, Hungary

He  was born in Mány in 1915. In 1944 he was the Royal Hungarian Policeassistant to the commander in the city of Kassa in Hungary (now Košice in Slovakia).

He was accused of organizing the deportation of approximately 15,700 Jews to Auschwitz and of having inhumanely exercised his authority in a forced labor camp. He was also accused of brutalizing the inhabitants of the city.

He was sentenced to death and lived on the run for decades.

On 18 June 2013, Hungarian prosecutors charged Csatáry with war crimes, saying he had abused Jews and helped to deport Jews to Auschwitz in World War II. A spokesperson for the Budapest Chief Prosecutor’s Office said, “He is charged with the unlawful execution and torture of people, (thus) committing war crimes partly as a perpetrator, partly as an accomplice.”

The Budapest higher court suspended his case on 8 July 2013, however, because “Csatáry had already been sentenced for the crimes included in the proceedings, in former Czechoslovakia in 1948”. The court also added that it is necessary to examine how the 1948 death sentence could be applied to Hungarian legal practice. 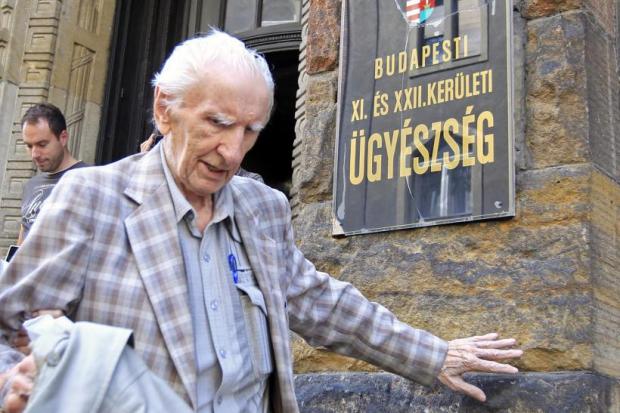 “I worked outside the ghetto in the brick factory, cleaning. I remember Csatary loudly screaming orders at Jews. I didn’t work under him but heard the terrible things he did. I remember women digging a ditch with their hands on his orders. He was an evil man and I hope he is brought to justice.”

But Csatáry never faced trial , on August 10,2013 he died of pneumonia in the hospital age 98.