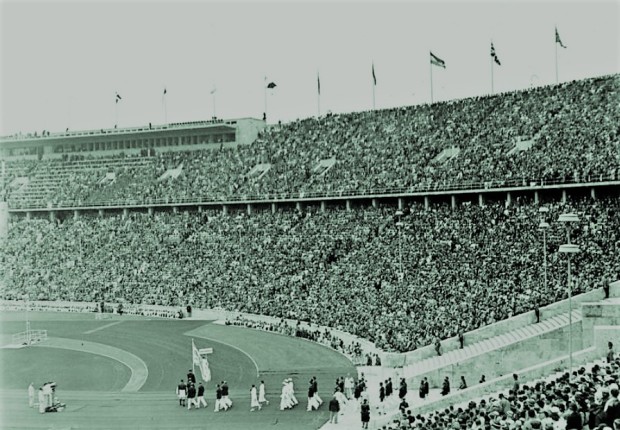 On July 26,1935,German sports commissioner Hans von Tschammer und Osten advised that no Jews would represent Germany at the 1936 Berlin Olympics. He claimed that Jews had competed in the qualifying events but none made the grade. In November 1935 Germany would make a bit of a u-turn after  mounting international pressure and allow the half-Jewish fencer Helene Mayer onto the team.

In 1936 the Nazi politics which enabled the Holocaust were already in full swing, three years prior the first concentration camp, Dachau, had already gone in operation.

The first Jewish person to die in Dachau was Arthur Kahn, a 21-year-old Jewish German medical student had enrolled in Edinburgh University in Scotland, he had returned to , Germany to pick up his student records at the University of Wurzburg.He was killed on April 12 1933.

In the U.S, there were those who believed that the country should boycott the 1936 Olympics due to Hitler’s stand towards Jewish athletes and his obvious discrimination towards athletes of African-American descent.

Helen Mayer had already  won a gold medal in fencing at the age of 17 at the 1928 Summer Olympics in Amsterdam, representing Germany, winning 18 bouts and losing only 2. She became a national hero in Germany and was celebrated, with her photo plastered everyone. According to a profile in The Guardian, “She was tall, blonde, elegant and vivacious. The fact that she was tall,blonde and blue eyed were taken in consideration to include her in the Olympic squad.

In 1931, her father died of a heart attack. She finished fifth at the 1932 Summer Olympics in Los Angeles, having learned, two hours prior to the match, that her boyfriend had died in a military training exercise in Germany.Two years later Helene Mayer lost her German citizenship. Luckily for her, she managed to enroll into Berkley and to compete for the USC Fencing Club.

In 1936, however, it appeared that the same people who stripped her of citizenship and humiliated her to the point of complete ostracization, wanted her to perform once again for Germany.

Reluctantly she decided to accept the invitation although she was caught between a rock and a hard place between her professional career and her dignity and pride.

Goebbels requested of the press that no comments were to  be made regarding Helene Mayer’s non-Aryan ancestry She won a silver medal in individual women’s foil. She gave a Nazi salute on the podium, and later said it might have protected her family that was still in Germany, in labor camps.

There are some who have called her a traitor. I don’t describe to that point of view, in fact I think what she did was heroic. She was safe in the USA but yet she decided to represent her country at the major sporting tournament, risking being imprisoned after the tournament and especially if she hadn’t won a medal. Although the politics of her country failed her she still felt German, she had no political agenda. And I believe she competed for Germany in the hope of securing better treatment for her family, who were still living in Germany. It is easy to judge when you are not put in that position.

At the end of the day she was used as a pawn of the Nazi regime and the International Olympic Committee.

After the Olympics, she returned to the United States and became a nine-time U.S. champion. She received citizenship in 1941 but returned to Germany in 1952.Where she married an old friend, Erwin Falkner von Sonnenburg, in a quiet May ceremony in Munich. The couple moved to the hills above Stuttgart before setting in Heidelberg where she died of breast cancer in October 1953, two months before her 43rd birthday.