I know all these W’s in the title would nearly make you dizzy , unfortunately there are more to come.

What happens if you are arrested and brought to jail and it is claimed you were there before and you know you weren’t but there is an eye witness placing you there.

This happened to Will West in 1903

Will West arrived at the United States Penitentiary in Leavenworth, Kansas in 1903. After seeing his mug shots, the prison clerk took one look at the photos and insisted she had seen him before. Mr. West explained he had never been to Leavenworth, and that she was mistaken.

The clerk, convinced that she was correct, collected Mr. West’s Bertillon measurements (the identification method used to identify prisoners up until this case) and dug through the archives of inmates.

Eerily, she pulled out a file that undoubtedly was the face of the man standing in front of her. However, he was telling the truth. Mr. West had never been to Leavenworth, and was naturally perturbed. How had his photo ended up in the files of the penitentiary? To be fair even Will West thought it was his picture He told the clerk“That’s my picture, but I don’t know where you got it because I’ve never been here before!” As it turned out, there was another inmate with the exact measurements as Mr. West who was already there serving a life sentence. If that wasn’t strange enough, his doppelgänger was named William West.

The two men were not related in any way, and law enforcement quickly realized that a more reliable method of identification was necessary. The case of Will and William West changed the face of forensics. Fingerprinting soon became the standard method for identifying criminals.

Because of these two men, you never have to worry about going to prison simply for sharing the same face and physical characteristics of another known criminal. Luckily for us all, our unique fingerprints will never allow for another case of mistaken identity. 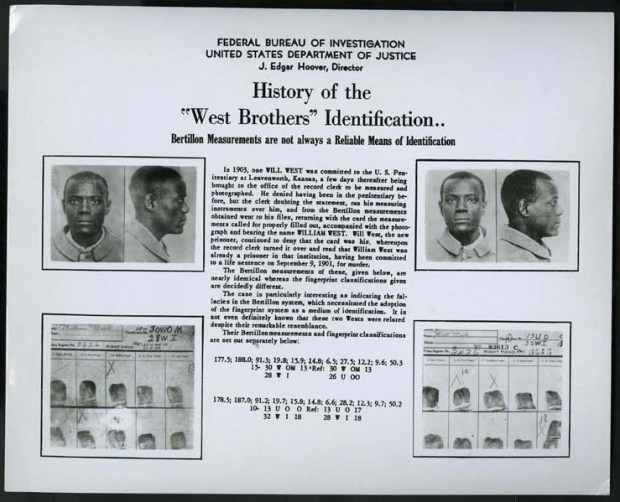 I don’t actually know what either of the men were charged with but that doesn’t make this story less intriguing.