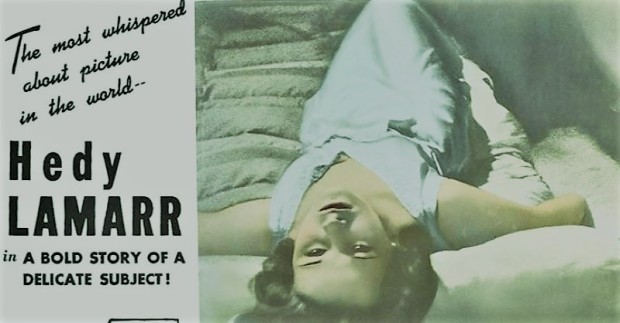 I have already done a blog on how Hedy Lamarr was imvolved in developing and patenting a technology which was a front runner of something we now commonly call WiFi. That on its own makes her a remarkable woman, but there is so much more to her.

In 1933 she starred in a Czech  romantic drama called Ecstasy. She was 19 at the time but even at that young age she produced a first in movie history.Ecstasy was highly controversial at the time  because of scenes in which Lamarr(then still called Hedy Kiesler) swims in the nude and runs through the countryside naked. It is also  the first non-pornographic movie to portray sexual intercourse and female orgasm, to be released in main stream cinema. Although nudity was not uncommon in European movies, the erotic nature of Ecstasy was a first.Causing outrage in both Hitler’s Germany ,the United States and the Vatican. 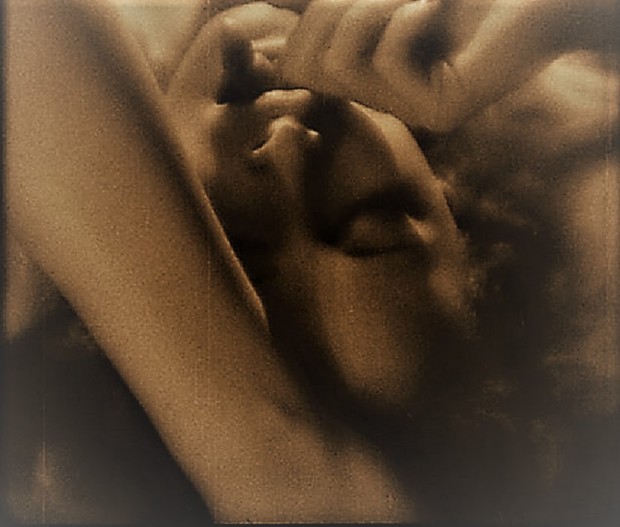 Hedy Lamarr, was by many critics and fans alike regarded as the most woman beautiful ever to appear in films.

Born Hedwig Eva Kiesler in Vienna, Austria. She was the daughter of Gertrud (Lichtwitz), from Budapest, and Emil Kiesler, a banker from Lember (now known as Lviv in Ukraine). Her parents were both Jewish. However her Mother converted to Catholicism and raised her daughter Hedy as a Catholic too.

Hedy was married 6 times, but I am only focusing on her first Husband. Friedrich Mandl was an ardent fan of Hedy especially after seeing the movie “Ecstasy” He would persistently send her flowers, it did pay off. Although Friedrich(Fritz) Mandl had a Jewish father, he was prominent fascist, 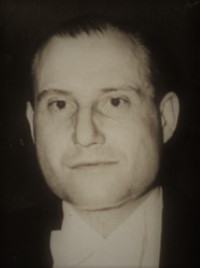 He did inherit the arms factory from his father, Alexander Mandl, which was used to help equip Hitler’s army Until 1940. According to Hedy both Italian dictator Benito Mussolini and  Adolf Hitler would sometimes attend Mandl’s parties. But, he had a personal quarrel with  Hermann Göring which, as well as his Jewish descent, led to the expropriation of his property in Europe. He fled to Switzerland. By then he had already divorced Hedy, the couple split up  in 1937.

Hedy Lamarr’s Father died in 1935. After the Germany’s Anschluss with Austria, Hedy helped get her mother out of Austria to the USA,where Hedy had moved to after she had met Metro-Goldwyn-Mayer  studio boss  Louis B. Mayer, who offered her a movie contract in Hollywood..

During World War II she did support the war efforts with her celebrity by selling war bonds.She used an act which she had with a sailor  named Eddie Rhodes. He’d be  in the crowd at each Lamarr appearance, and Hedy would call him up on stage. She would briefly flirt with him before asking the audience if she should give him a kiss. If the crowd would say yes(they always did) then  Hedy would tell the crowd  that she would kiss the sailor ,if enough people bought war bonds. When enough bonds were bought, she would kiss Rhodes and he would head back into the audience.

I was reluctant to add the  scene from that notorious movie “Ecstasy” because not every one might appreciate it ,however compared to  21st century standards it would be fairly innocent.

I am finishing therefore with the other amazing thing she became known for, the patent and blueprint she(under her married name Markey) and George Antheil submitted  for radio frequency hopping, basically an early front runner for WiFi. 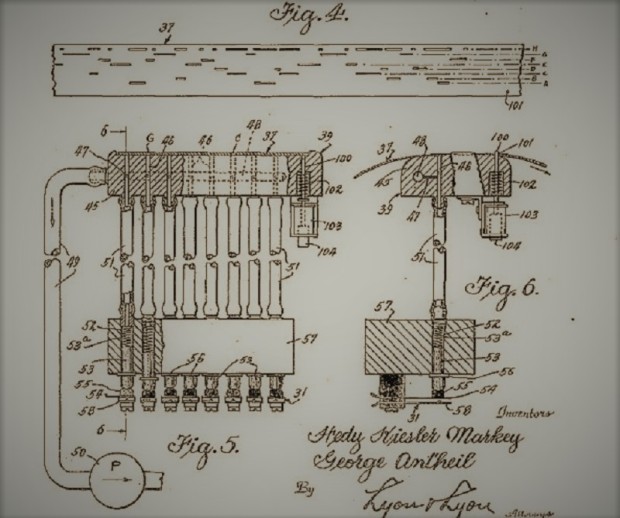