8.15 AM 6 August 1945 is the date that changed the lives for everyone in Hiroshima. This is the time when the first ever atom bomb’Little Boy’, was dropped.

The explosion wiped out 90 percent of the city and immediately killed 80,000 people; tens of thousands more would later die of radiation exposure.

Hiroshima, a manufacturing center of some 350,000 people located about 500 miles from Tokyo, was selected as the first target. After arriving at the U.S. base on the Pacific island of Tinian, the more than 9,000-pound uranium-235 bomb was loaded aboard a modified B-29 bomber christened Enola Gay (after the mother of its pilot, Colonel Paul Tibbets). The plane dropped the bomb–known as “Little Boy”–by parachute at 8:15 in the morning, and it exploded 2,000 feet above Hiroshima in a blast equal to 12-15,000 tons of TNT, destroying five square miles of the city.American President Harry S. Truman called for Japan’s surrender 16 hours later, warning them to “expect a rain of ruin from the air, the like of which has never been seen on this earth”.

By the time of the Trinity test(was the code name of the first detonation of a nuclear weapon) the Allied powers had already defeated Germany in Europe. Japan, however, vowed to fight to the bitter end in the Pacific, despite clear indications (as early as 1944) that they had little chance of winning. In fact, between mid-April 1945 -when President Harry Truman took office 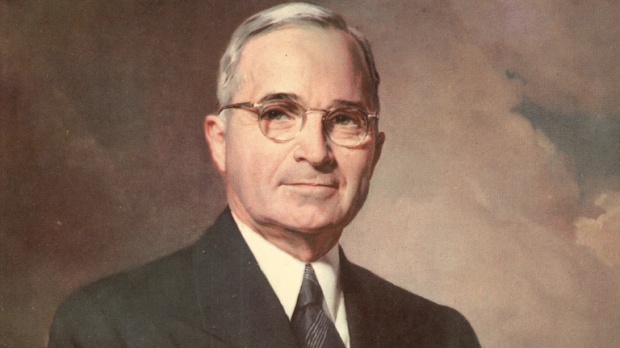 -and mid-July, Japanese forces inflicted Allied casualties totaling nearly half those suffered in three full years of war in the Pacific, proving that Japan had become even more deadly when faced with defeat. In late July, Japan’s militarist government rejected the Allied demand for surrender put forth in the Potsdam Declaration, which threatened the Japanese with “prompt and utter destruction” if they refused.

Hiroshima’s devastation failed to elicit immediate Japanese surrender, however, and on August 9 Major Charles Sweeney flew another B-29 bomber, Bockscar, from Tinian.

Thick clouds over the primary target, the city of Kokura, drove Sweeney to a secondary target, Nagasaki, where the plutonium bomb “Fat Man” was dropped at 11:02 that morning. More powerful than the one used at Hiroshima, the bomb weighed nearly 10,000 pounds and was built to produce a 22-kiloton blast. The topography of Nagasaki, which was nestled in narrow valleys between mountains, reduced the bomb’s effect, limiting the destruction to 2.6 square miles.

The survivors of the bombings are called hibakusha , a Japanese word that literally translates to “explosion-affected people”. As of March 31, 2015, 183,519 hibakusha were recognized by the Japanese government, most living in Japan.The government of Japan recognizes about 1% of these as having illnesses caused by radiation. The memorials in Hiroshima and Nagasaki contain lists of the names of the hibakusha who are known to have died since the bombings. Updated annually on the anniversaries of the bombings, as of August 2015 the memorials record the names of more than 460,000 hibakusha; 297,684 in Hiroshima. 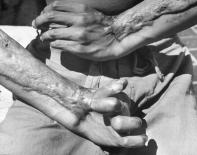 Hibakusha and their children were (and still are) victims of severe discrimination in Japan due to public ignorance about the consequences of radiation sickness, with much of the public believing it to be hereditary or even contagious.

This is despite the fact that no statistically demonstrable increase of birth defects or congenital malformations was found among the later conceived children born to survivors of Hiroshima and Nagasaki. A study of the long-term psychological effects of the bombings on the survivors found that even 17–20 years after the bombings had occurred survivors showed a higher prevalence of anxiety and somatization symptoms.

The medical effects of the atomic bomb on Hiroshima upon humans can be put into the four categories below, with the effects of larger thermonuclear weapons producing blast and thermal effects so large that there would be a negligible number of survivors close enough to the center of the blast who would experience prompt/acute radiation effects, which were observed after the 16 kiloton yield Hiroshima bomb, due to its relatively low yield:

The burns on this survivor took on her kimono pattern; the lighter areas of the cloth reflected the intense light from the bomb, causing little to no burns. The tighter fitting parts of clothing, such as the shoulders, are the most severe. Loose fitting sections show no burning.

During the war, Japan brought many Korean conscripts to both Hiroshima and Nagasaki to work as slaves. According to recent estimates, about 20,000 Koreans were killed in Hiroshima and about 2,000 died in Nagasaki. It is estimated that one in seven of the Hiroshima victims was of Korean ancestry.For many years, Koreans had a difficult time fighting for recognition as atomic bomb victims and were denied health benefits. However, most issues have been addressed in recent years through lawsuits.

It was a common practice before the war for American Issei, or first-generation immigrants, to send their children on extended trips to Japan to study or visit relatives. More Japanese immigrated to the U.S. from Hiroshima than from any other prefecture, and Nagasaki also sent a high number of immigrants to Hawai’i and the mainland. There was, therefore, a sizable population of American-born Nisei and Kibei living in their parents’ hometown of Hiroshima  at the time of the atomic bombings. The actual number of Japanese Americans affected by the bombings is unknown — although estimates put approximately 11,000 in Hiroshima city alone — but some 3,000 of them are known to have survived and returned to the U.S. after the war.