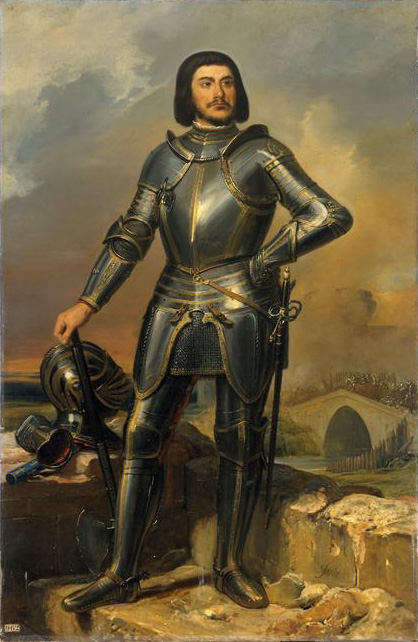 Gilles de Rais was probably born in late 1405 to Guy II de Montmorency-Laval and Marie de Craon in the family castle at Champtocé-sur-Loire. He was an intelligent child, speaking fluent Latin, illuminating manuscripts, and dividing his education between military discipline and moral and intellectual development.Following the deaths of his father and mother in 1415, Gilles and his younger brother René de La Suze were placed under the tutelage of Jean de Craon, their maternal grandfather.Jean de Craon was a schemer who attempted to arrange a marriage for twelve-year-old Gilles with four-year-old Jeanne Paynel, one of the richest heiresses in Normandy, and, when the plan failed, attempted unsuccessfully to unite the boy with Béatrice de Rohan, the niece to the Duke of Brittany. On 30 November 1420, however, Craon substantially increased his grandson’s fortune by marrying him to Catherine de Thouars of Brittany, heiress of La Vendée and Poitou .Their only child Marie was born in 1429.

At an early age Rais distinguished himself militarily, fighting first in the wars of succession to the duchy of Brittany (1420) and then for the duchess of Anjou against the English in 1427. He was assigned to Joan of Arc’s guard and fought several battles at her side, including the relief of Orléans in 1429.

He accompanied her to Reims for the consecration of Charles VII, who made him marshal of France. He continued to serve in Joan of Arc’s special guard and was at her side when Paris was attacked. After her capture, he retired to his lands in Brittany.

Rais had inherited extensive domains from both his father and his maternal grandfather (Guy de Laval and Jean de Craon, respectively) and had also married a rich heiress, Catherine de Thouars (1420). He kept a more lavish court than the king, dissipating his wealth on the decoration of his châteaux and the maintenance of a large train of servants, heralds, and priests. He was a munificent patron of music, literature, and pageants, in one of which he figured (The Mystery of Orléans). When his family secured a decree from the king in July 1435, restraining him from selling or mortgaging the rest of his lands, he turned to alchemy. He also developed an interest in Satanism, hoping to gain knowledge, power, and riches by invoking the devil.

Rais was chosen as one of four lords on July 17, 1429 and was officially declared a Marshal of France on that same day. Rais was not present when Joan was burned at a stake by the English in May 1431.

A year after Joan’s death, his grandfather died on November 15, 1432 and left his sword and breastplate to René de La Suze, Rais’ younger brother, as a way to punish Rais for the reckless spending of his fortune.

In 1435, now bankrupt and no longer involved with the military, Rais began selling his properties to support his extravagant lifestyle. On July 2, a royal edict denounced Rais and prohibited him from selling any further property, Rais subsequently left Orléans.Rais’ first murders occured between 1431 and 1433, with the help of his accomplices, Rais kidnapped and killed an unknown number of children, some were even used rituals involving alchemy and demon summoning. On one occasion, Rais provided a contract with a demonic entity named Barron and attempted to summon him, but grew frustrated after no demon manifested. Having being told that Barron demanded the soul of at least one child, Rais murdered a boy and dismembered him, placing his limbs inside a glass vessel, but again, no demon manifested. On May 15, 1440, Rais abducted and murdered a cleric, which caught the attention of the Bishop of Nantes, who investigated him and discovered his heinous crimes, forty bodies of his victims were found. Rais subsequently confessed to the murders and was sentenced to death along with his accomplices. Rais was hanged and burned on October 26, 1440.

It is alleged he murdered more then 100 children.Gilles de Rais is believed to be the inspiration for the 1697 fairy tale “Bluebeard” (“Barbe bleue”) by Charles Perrault.