Recently I heard this bizarre debate on how humane the killing with Zyklon B was. It was so much better then being executed. Fortunately the site where this was debated on was taken down ,unfortunately I didn’t take note of the names.

In case if any one is wondering if the killing with Zyklon B gas was humane, let me please destroy that notion. Firstly it wasn’t an instant death, there were some instance  where it would take up to 30 minutes to die from it in a very painful way.

The picture above shows 2 soldiers demonstrating how to avoid the leaking of Zyklon B from the gas chambers by applying mud and loam soil to the chinks of the door.

You can also see they are wearing Gas masks. These are not German soldiers but Soviet soldiers after the liberation by the Soviet army in July 1944. Demonstrating how to avoid the leaking, the fact that they had to wear a gas mask while they were outside of the gas chambers says enough.

Henio Zytomirski was a 9 year old boy who was gassed at Majdanek concentration camp in Poland , on November 9 1942.

In 2005 a project was started in Lubin ,Poland, called ‘Letters to Henio. Each year on April 19 ,which is Holocaust Remembrance Day in Poland, pupils and citizens of Lublin are asked to send letters addressed to Henio Zytomirski at 11th Kowalska Street, the last known address of Henio in Lublin.

Although it is not the 19th of April today I still will send him a letter via this blog. It is not only a letter to Henio but also an indictment to those who want to silence people like me. People who desperately want to keep the memory of Henio ,and all the other victims alive, But often they are met by threats of those who take pleasure in the Holocaust and/or deny it, Or are threatened by history revisionists who lack the bravery and dignity to admit their nation made many mistakes, they rather sweep it under the carpet.More disturbingly they are being ridiculed by so called Holocaust scholars, not because they are telling untruths , but because they choose a different word then these so called scholars would and they start a war of semantics not realizing how much damage that does because it distracts from the message. The message of maintaining the memories alive , the memories like those of Henio.

I should not have to send you a letter. In fact I should not even know your name. You really should have lived a mundane or even boring life. Or perhaps a very exciting life but you didn’t.

You never got the chance to grow up . You were born 25 March 1933 and murdered in a most brutal way on November 9 1942. You were just 9 years old when you were killed.

Your life was taken from you but your memory isn’t.

Nowadays you would probably have been called an ‘influencer’ because you have several social media accounts with a great number of followers. But if I look at some of the pages dedicated to you I get sad, because they are using you as a way to get some political message across.

You were not a politician, How could you have been? You were only 9. All I want to do is to show your picture and a few details of your life so that people remember your name, and maybe they will even try to find out more about you, and that is good, because that means a piece of you is still alive.

There are some who want to stop me from telling your story and that of other children, but I won’t let them, Because these people have nothing to contribute to society.

If my day comes and I hope that won’t be any day soon, and I pass through I pass through the pearly gates,if I am allowed, I will look you up and we will talk then.

For now my young friend rest in peace in the knowledge you are not forgotten.

If you wouldn’t know the wider context of the picture, you would smile at it and think” a lovely picture of young people in the military enjoying themselves”.

And that is exactly what they did , they did enjoy themselves. However this weren’t just some random service men and women. These men and women all had a part to play in the industrial murder of innocent men,women and children, sometimes even newborn babies.

These men and women were all officers and guards of the Auschwitz concentration camp. This photo and others were taken by Karl Hoecker arrived at Auschwitz on May 25, 1944. He was adjutant to Richard Baer, who was a commandant of Auschwitz I concentration camp from May 1944 to December 1944.

Prior to Auschwitz he worked in Majdanek . Majadenke Camp records showed that between May 1943 and May 1944 Höcker had acquired at least 3,610 kilograms of Zyklon B  for use in Majdanek from the Hamburg firm of Tesch & Stabenow.

People often ask me what pictures do I find I most disturbing from the Holocaust. It is not the pictures of children, although they churn my stomach every time I see them. Nor is it the pictures of the heaps of bodies piled on top of each other . It is the pictures like the ones from the Höcker album, which show such an apparent parallel universe that existed in Auschwitz and the sheer evil of people enjoying themselves after work , when they would have been responsible or at least witnessed at first hand, the destruction of so many innocent  lives, only because of hate fueled by a sick ideology.

Some of these men and women had children themselves, yet they did not hesitate killing children of other parents. As if the lives of Jews and other groups just didn’t matter. 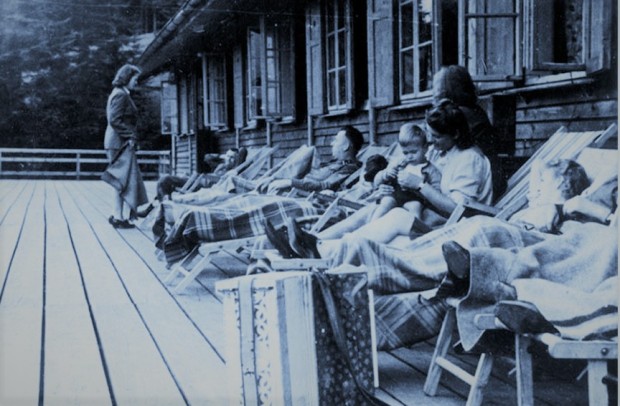 This picture was taken after the Death Camp Majdanek was liberated in July 1944.The Majdanek extermination camp in Lublin was liberated by Soviet troops on July 23, 1944; it was the first of many Nazi concentration camps to be liberated by the Allies.

In the foreground of the picture you can see a few dozen of empty cans. These cans had all contained Zyklon B.

Zykon B was the cyanide-based pesticide used to gas victims in Auschwitz-Birkenau, Majdanek, and other death camps.

When you look at the amount of empty cans you only get a slight indication of the scale of the industrialized murder. The death toll in Majdanek was up to 150,000 of which 60,000 Jews, most of them known by name.

The 2 soldiers in the picture are soviet soldiers who are inspecting the ovens which were used to burn the bodies.

Every time when I think I can’t discover anything more about the Holocaust, I stumble on hundreds of more documents and pictures, with more information and evidence.