Reporting the news accurately is important at any given time. Reporting it accurately during wartime when tensions are high is vital, if you fail to do so it can create false expectations and can potentially cost lives.

On Tuesday September 5th 1944, the Dutch  Prime Minister Gerbrandy announced via the Radio Oranje  that the allied army had crossed the border and Breda had been liberated. In fact he had announced it twice initially on September 4th at 23:45 and then again inhe morning of September 5th. The BBC had picked up the announcement too.

The  information was totally inaccurate, but the Dutch expected the Allied army to be in Rotterdam the same day. The Germans panicked, their army fled North and East in the Netherlands. 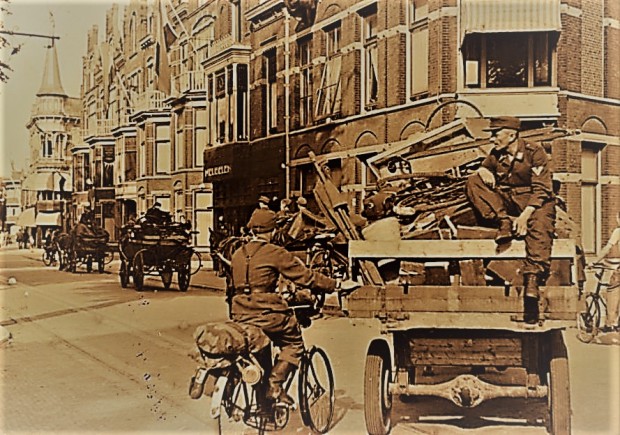 The Nazi leadership Arthur Seyss-Inquart and Hanns Albin Rauter, SS and police leader added to the  speculation by announcing a “State of Siege” for the Netherlands to the 300,000 cable radio listeners.

“The population must maintain order … it is strictly forbidden to flee areas that are threatened by the enemy. All orders from the military commanders must be strictly adhered to and without question … any resistance to the occupation forces will be suppressed with force of weaponry. Any attempt to fraternize with the enemy or to hinder the German Reich and its allies in any form will be dealt with harshly; perpetrators will be shot”

The Dutch did not heed the warning  and went out and celebrated on the streets while preparing to welcome and cheer on the Allied liberators. Dutch and Orange flags and pennants were prepared, and many workers left their place of employment to wait for the Allies to arrive.

Some kids even took down German road signs.

German occupation forces and NSB members got in a panic .documents were destroyed and many fled the Netherlands for Germany.

Many of the NSB fled temporarily to  the Lüneburger Heide in Germany .While the NSB leader .Mussert , moved more eastward to Almelo. The illegal newspaper “Het Parool” reported on the 11th of September on how these NSB”Heroes” fled the country.

Luckily there were no fatal casualties as a result of this, among the general Dutch population, although a few celebrants were shot and others were arrested.

The day after however, on September 6 a train carrying wives and children of members of the NSB headed for Germany. The train was attacked by allied planes and about 30 passengers were killed. I do feel sorry for the wives and especially the children for they were innocent bystanders  but I do also believe this was karma, and the irony is not lost on me for the NSB had helped to put so many Jews and other on trains to their final destinations.

The name ‘Dolle Dinsdag’ was coined by Willem van den Hout, alias Willem W. Waterman, who first used it in the Dutch Nazi  propaganda newspaper ‘de Gil’ (the yel) which was funded by the German propaganda department.

The whole confusion of ‘Dolle Dinsdag’ had come about because of one word. Before the radio broadcast , Prime Minister Gerbrandy had changed the text from ‘the allies approached the border’ to ‘crossed the border’

It would take another 9 days before Maasticht would be liberated, which was the first major Dutch city to be liberated by allied troops.