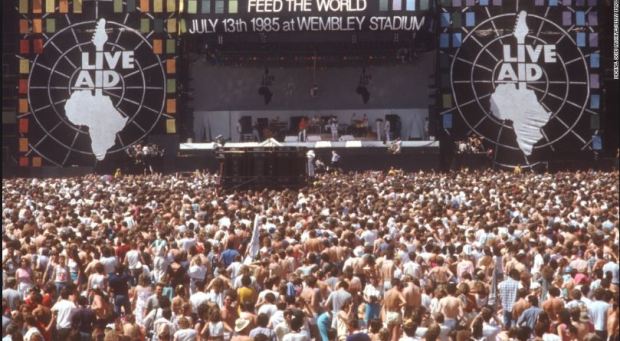 On July 13 1985, one of the biggest ever music concerts took place. Live Aid. The aim of the concerts was to raise  funds for relief of the ongoing Ethiopian famine.

The concerts are often referred to as a dual-venue benefit concert, which is actually not true. Yes the main concerts took place in London and Philadelphia but there were other concerts held in tandem in Australia,Asia and other European countries.

Their performance was broadcast via Satellite from Moscow to Wembley,London.They were introduced by Introduction by Vladimir Posner .They played 2 songs Golovokruzhenie ( ” Vertigo “) and Nam nuzhen nir ( ” We need peace “).

Yugoslavia contributed with their equivalent to Band Aid and USA For Africa with a song called “For a Million Years” the song was introduced by Mladen Popovic , who also gave some background information to the song.

BB King was performing at the North Sea Jazz Festival in the Hague,Netherlands that night and joined also via satellite link and played 4 songs.