Although the US stayed initially neutral during WWII,it had been making preparations for an eventual war with the Axis powers.

Worsening relations with the Axis powers prompted President Roosevelt to order all German assets in the U.S. frozen on June 14, 1941. On June 16 he ordered the withdrawal of German and Italian consular staffs by July 10.

The executive order was signed for  freezing all German and Italian assets.
The order was also  coupled with new regulations giving the Government complete
authority over European assets in the United States.

The executive order read in part: “It has come to the knowledge of this Government that agencies of the German Reich in this country, including German consular establishments, have been engaged in activities wholly outside the scope of their legitimate duties. These activities have been of an improper and unwarranted character. They render the continued presence in the United States of those agencies and consular establishments inimical to the welfare of this country.” 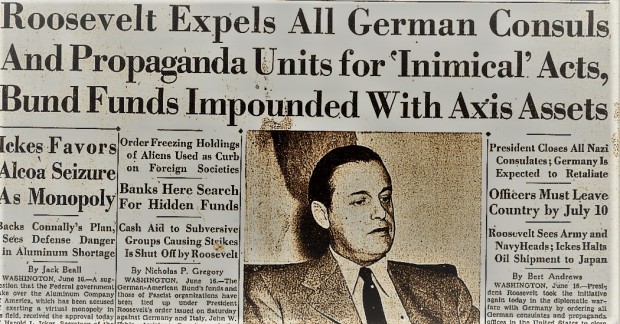 In December that year the US entered the war after the Pearl Harbor attack.