It would be easy to say that all Germans were bad during WWII and that none of the Catholics and Protestant Christians lifted a finger to fight the Nazi regime. Although I hear this increasingly, it is a wrong assumption to make. In fact there were many who risked their lives,knowing quite well the chances of being caught and being tortured and executed were high. The 4 brave men commonly referred to as the Lübeck martyrs are a good example. 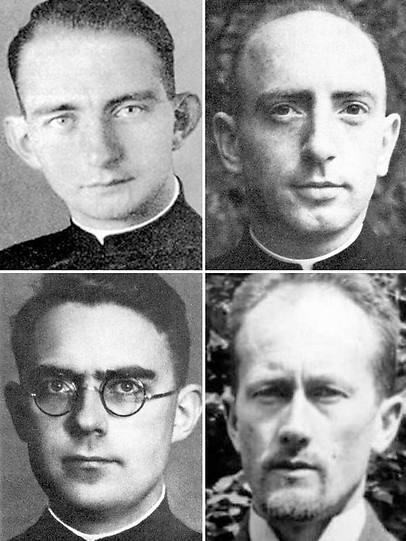 Fathers Hermann Lange, Eduard Müller and Johannes Prassek, along with Lutheran pastor Karl Friedrich Stellbrink, were guillotined in a Hamburg prison in November 1943.  The Nazi regime found them guilty of “defeatism, malice, favouring the enemy and listening to enemy broadcasts.

What distinguishes these four also is the fact that in the face of National-Socialist despotism they overcame the divide between the two faiths to find a common path to fight and act together.

The Catholic priests worked at the Herz-Jesu Kirche (Sacred Heart Church) in the centre of Lübeck, Prassek as a chaplain, Müller as assistant minister and Lange as vicar. Stellbrink was pastor of the city’s Lutherkirche (Luther Church). The four had been close friends since 1941, exchanging information and ideas, and sharing sermons, including those of Clemens August Graf von Galen, Catholic bishop of Münster.

In his Palm Sunday 1942 sermon, Stellbrink had interpreted a British air raid on Lübeck the previous night as God’s judgment. He was arrested on 7 April 1942, followed by Prassek on 18 May, Lange on 15 June, and Müller on 22 June. In addition to the clerics, a further 18 Catholic lay people were arrested, including Stephan Pfürtner, who would later become a moral theologian.

A year later, between 22 and 23 June 1943, the trial of the four men took place before the second chamber of the People’s Court, with Wilhelm Crohne presiding. He had journeyed to Lübeck specifically for the hearing. The clerics were sentenced to death for ‘broadcasting crime [specifically, listening to enemy broadcasts ], treasonable support for the enemy and demoralisation of the Armed Forces’. Some of their co-accused lay brethren received long prison sentences. The trial became known as the “Lübeck Christians’ Trial”, an indication of the anti-Christian bias of proceedings.

The clerics were immediately transferred to Hamburg’s Holstenglacis Prison, which had become the regional centre for executions in 1936 and had added an execution building with permanently mounted guillotine in 1938.The Catholic bishop under whose care the Catholic priests fell, Wilhelm Berning (Diocese of Osnabrück) visited the priests in prison and wrote a plea for clemency, which was rejected. Pastor Stellbrink received no support from his Province’s church authorities, and prior to his execution was ejected from Holy Orders because of his conviction.

Pastor Karl Friedrich Stellbrink’s career is not without controversy. He, who was sentenced and executed as an opponent of the Nazi Regime, came to Lübeck as a supporter of that regime in 1934. Stellbrink supported the program of the NSDAP (National-Socialist German Labour Party) from a German-national point of view and had welcomed Adolf Hitler’s ascension to power with great hopes. Contributing to his expectations would have been the romanticised picture of Germany which Stellbrink would have carried with him during his time of service as pastor to German parishes in Brazil (1921 to 1929).

Pastor Stellbrink and familiyStellbrink, like many others, fell victim to the deceptions of Hitler, who pretended to be a Christian and liked to quote biblical texts. As time proceeded, Stellbrink’s idea of a fruitful symbiosis between Christendom and National-socialism proved to be nothing but an illusion.

A crucifix covered up with a greatcoat at the chapel of the Vorwerk Cemetery during the funeral of a Lübeck Nazi personality was to him the beacon of Christ-hatred, a hatred which he openly denounced in his sermon on Palmarum (Palm Sunday) 1942, after the terrible bombing raid on Lübeck: “God has spoken in a loud voice and the people of Lübeck will once again learn to pray”. This sermon led to his arrest by the Secret State Police (Gestapo), which was followed by the arrest of the three catholic priests. Also arrested and charged were 17 members of the catholic community and an evangelical-Lutheran parishioner. They were tried and sentenced to various lengths of imprisonment, except for two cases, which were deemed to have served their time in remand.

Realising the true character of National-socialism was paralleled with Stellbrink’s growing friendship with the three catholic chaplains and the von de Berg family, who played a leading role in the catholic community in Lübeck. While Stellbrink’s initial anti-catholicism had been implanted during his education, it turned into acceptance. This friendship also led to the appreciation of the importance and implications of the sermons of the bishop of Münster, Graf von Galen, which revealed irrefutably the criminal and inhuman character of the Nazi regime. It resulted in their copying and duplicating these sermons together, which were distributed among the community. This was the true reason for their arrests, trials and executions.

Stellbrink stood, like many other evangelical theologians before 1933, for a tradition which had an anti-catholic, anti-jewish character. „Against Rome and Juda!“ became their motto, because both were deemed to be un-German and alien to the German psyche. As his anti-catholic stance withered so did his anti-jewish attitudes.

Pastor Karl Friedrich Stellbrink thus took a long route, which changed from a German-national and National-socialist conviction, his rejection of catholicism and judaism, to their acceptance and a furtherance in the latter phase of his life; yet it ultimately led to his conviction.

Fifty years would pass before the North Elbian Evangelical Lutheran Church, successor of the Lübeck Lutheran church body, would initiate court proceedings to clear Stellbrink’s name and admit their shame at how this noble martyr had been treated.

was ordained to the Catholic priesthood in 1937, Father Prassek was assigned to Herz-Jesu Church together with Eduard Müller and Hermann Lange. He openly warned soldiers and youth groups against anti-Semitism, and protested the shooting of prisoners and Jews. Under German law at that time, such words were subject to the death penalty if reported to the Gestapo. Because of his sympathy for Polish workers who were forced laborers in the area, Father Prassek learned Polish so he could minister to them. Again, such ministry was illegal and could have led to his arrest – but the Gestapo never found out.

grew up in a very poor family, and he first trained to become a joiner, prior to studying for the priesthood. Ordained as a Catholic priest in 1940, he served at the Herz-Jesu Church. His youth group work and a discussion group he directed were very popular. Having experienced trade training himself probably gave him special rapport with young journeymen of the discussion group he led. 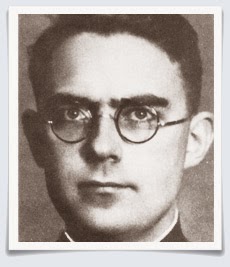 was an intellectual preacher. He told young soldiers in discussions, that participation in a war was strongly against the Christian faith. He wrote in a letter from prison on 25 July 1943 about the ecumenical consequences of the sufferings he and his fellow Catholics had shared with their Lutheran neighbors, even prior to the shared arrests and imprisonment: “The common sufferings of the past few years have brought about a rapprochement of the two Churches. The imprisonment of the Catholic and Protestant clergy is a symbol both of their joint suffering and of the rapprochement”

They felt, like many others, the liberating tone of these sermons, which broke the silence and proclaimed aloud the thoughts many had in their hearts, when the Nazi action for the ‘destruction of unworthy lives’ began, with the euthanasia of mentally disabled people.

The men’s last letters, written just hours before their deaths, have been preserved. Father Johannes Prassek wrote to his family: “I am so happy, I can hardly explain how happy.  God is so good to have given me several beautiful years in which to be his priest.

Father Eduard Muller wrote to his bishop: “It gives me great pleasure to be able to write a few lines to you in this, my last hour.  Whole-heartedly, I thank you first of all for the greatest gift which you gave me as a successor of the apostles, when you placed you hands on me and ordained me as God’s priest.

“But now we must embark upon this – in human terms difficult- final walk, which is to lead us to Him, whom we served as priests.”