If there is one type of music I hate with a passion it is Schlager Musik. Or German sweet and sentimental ballads. Yet here I am writing about one of the main perpetrators, sorry performers.

The only reason why I write about him is because he was one of my favourite singers, At my father’s funeral Freddy Quinn’s song “Junge komm bald wieder” was played.

One thing I didn’t realize is that Freddy Quinn was half Irish. I always thought his surname was his artist name, well it still is but it is also the surname of his father. I don’t know if my dad knew about Freddy’s Irish father, I am sure he would have liked that fact.

His early years were spent in Vienna. Freddy Quinn was born on September 27,1931 as Manfred Nidl either Vienna, Niederfladnitz (Lower Austria) or Pula (Croatia), depending on the source; his parents were Austrian journalist Edith Nidl and Irish merchant Johann Quinn. As a child, he lived in Vienna and went to primary school in the 8th district.

At the end of World War II, as part of a refugee group, Freddy encountered American troops in Bohemia. Due to his fluent English, the 14-year-old succeeded in pretending to be of American nationality. He was subsequently sent to the US in May 1945 with a military transport. On Ellis Island, he learned that his father had already died in 1943 in a car accident. The boy was immediately sent back to Europe and, before returning to his mother in Vienna, was stranded for a whole year in Antwerp in a children’s home, where he learned to speak French and Dutch.

In the 1950s he eventually cast anchor in Hamburg and started his extraordinary career in the music industry, cultivating the ‘authentic’ character of the singing sailor whose true home is the sea and who always yearns for faraway places. Legend has it that his first songs were released under the name Freddy because no one at the pressing plant knew how to spell his last name.

Starting in the late 1950s, Quinn also acted in several movies, frequently cast as the seafaring loner. Titles include Freddy, the Guitar and the Sea (1959), Freddy unter fremden Sternen (1959), Freddy and the Song of the South Pacific (1962), and Homesick for St. Pauli (1963). Subsequently, Quinn also performed on the stage in such diverse roles as Prince Orlofsky in Die Fledermaus, the king in The King and I, and Lord Fancourt Babberly in Charley’s Aunt.

Quinn was also an accomplished circus performer who stunned television audiences as a tightrope walker, performing live and without a safety net. On another occasion, which was also televised, he rode a lion inside a circus cage while the lion was balancing atop a moving surface.

Freddy will be celebrating his 90th birthday today in Hamburg.

I know what you are thinking “Didn’t he already do a piece on Deutschland ’83?” and you’d be right , but this blog is not about that show nor its follow up “Deutschland ’86”.

This piece is about the music in Germany in the 80’s. It always fascinated me that for this relatively short period of time the German music industry basically turned itself on its head. It went from the folky Schlager music to the NDW(Neue Deutsche Welle) German new wave and punk music,complemented with some rock acts.

Well at least for West Germany, East Germany was a different story altogether.

Below are some examples of that weird musical era in Germany. I do apologize for the first 2 songs but in order to get a feel for the paradox and to have a balance I felt compelled to put them in here.You can fast forward if you  so please.(I did)

The situation in the East

“Sonderzug nach Pankow” (Special Train to Pankow) is a song by the German rock singer Udo Lindenberg, released as a single on 2 February 1983.

It was a reaction to the refusal by the East German government to allow the West German singer perform a concert in East Germany .The text of this approximately three minutes long song is aimed  directly to East German leader Erich Honecker.

The melody is based on the 1941 swing classic “Chattanooga Choo Choo” by Glenn Miller. It did eventually did lead to Udo Lindenberg being granted to do 1 concert in East Germany on 25 October 1983. The concert was part of the “Rock für den Frieden”(Rock for Peace) festival. 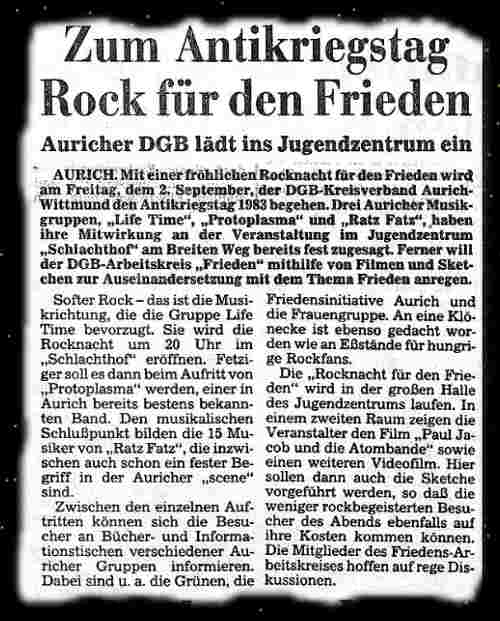 These guys must have listened to Led Zeppelin a lot.

Finishing up with the band that no one talks about anymore ,Milli Vanilli. Ironically the lip syncing scandal they were involved in has more or less become the standard in the Music industry nowadays.