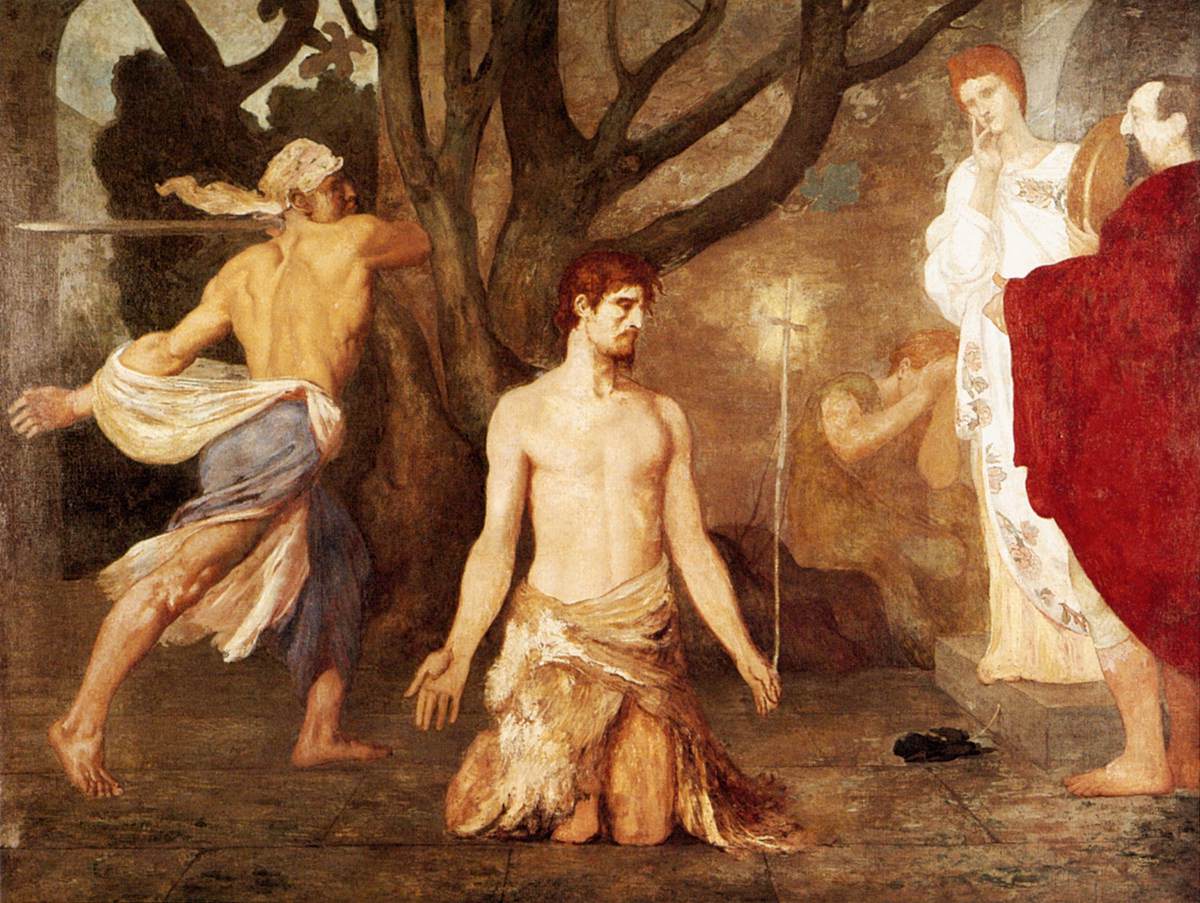 Ah yes, it is that time of year again when men frantically rush into the shops to buy those last minutes cards and presents for their beloved. Sweaty palms, nervous twitches etc. I say men because lets face it, you hardly see any women in shops buying valentine’s gifts(they are clever, they would have bought  stuff a week earlier).

It is the feast day of love and romance but the origin of St Valentine’s day is a brutal one.

Under the rule of Claudius the Cruel, Rome was involved in many unpopular and bloody campaigns. 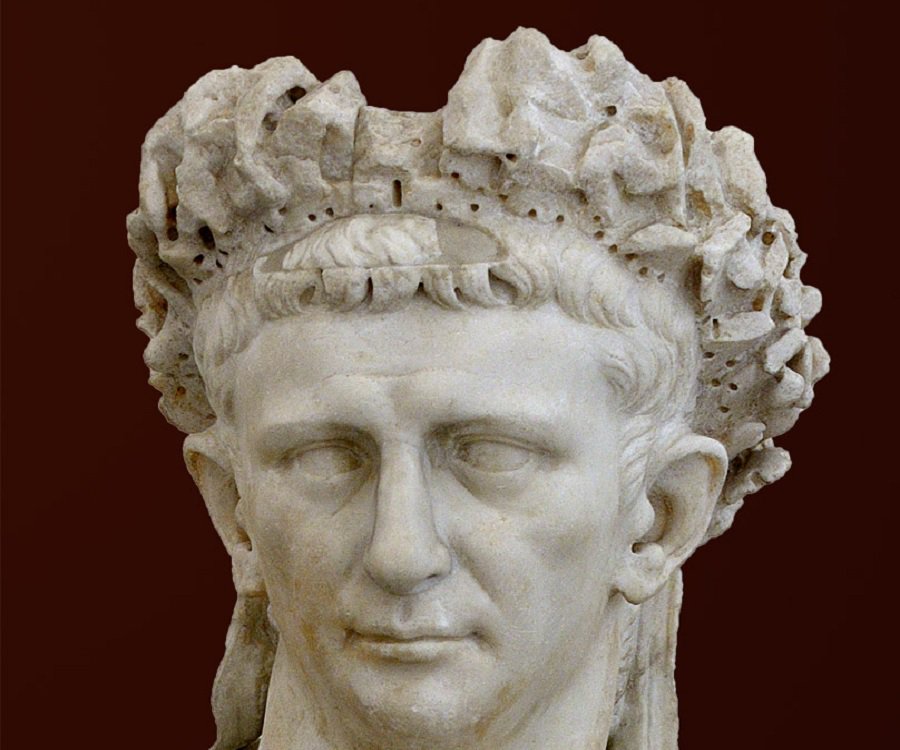 The emperor had to maintain a strong army, but was having a difficult time getting soldiers to join his military leagues. Claudius believed that Roman men were unwilling to join the army because of their strong attachment to their wives and families.

To get rid of the problem, Claudius banned all marriages and engagements in Rome. Valentine.

A Roman priest named Valentine believing that the decree was unfair, went against the cruel emperor’s decree and continued to secretly wed young lovers. When his actions were discovered, Claudius had the defiant Roman priest arrested and put to death. Part of the legend is the priest’s farewell note for his jailer’s daughter, whom he had befriended. He signed it, “From Your Valentine.” 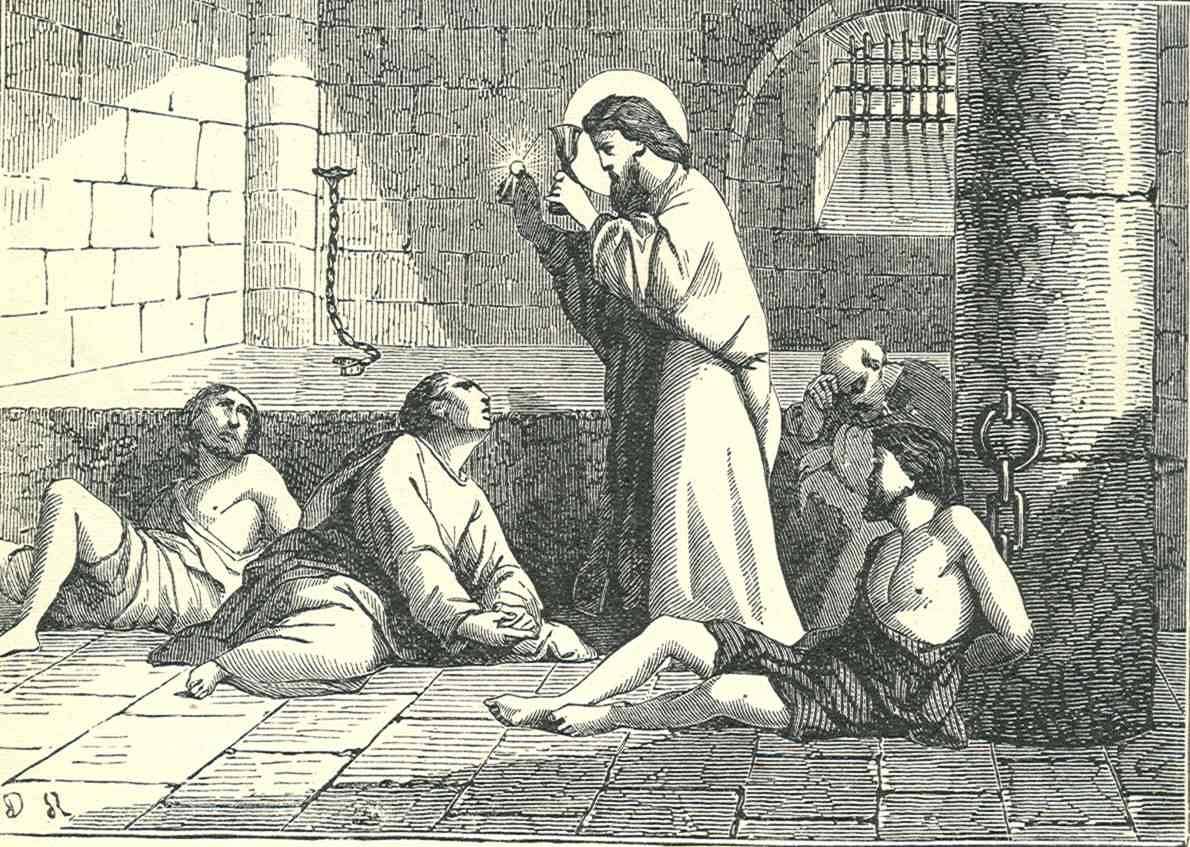 Valentine was taken to the Prefect of Rome, who sentenced him to be beaten to death and beheaded. Valentine’s execution took place on February 14, around the year 270. He was declared a saint for his service, and the rest, as they say, is history.

Although not much is actually known about this St. Valentine (as there are actually several early Christian martyrs named Valentine), and whether he actually performed his heroic deed for lovers, the world has come to regard him as a true herald of love, and has been celebrating February 14 by exchanging love letters and special gifts. 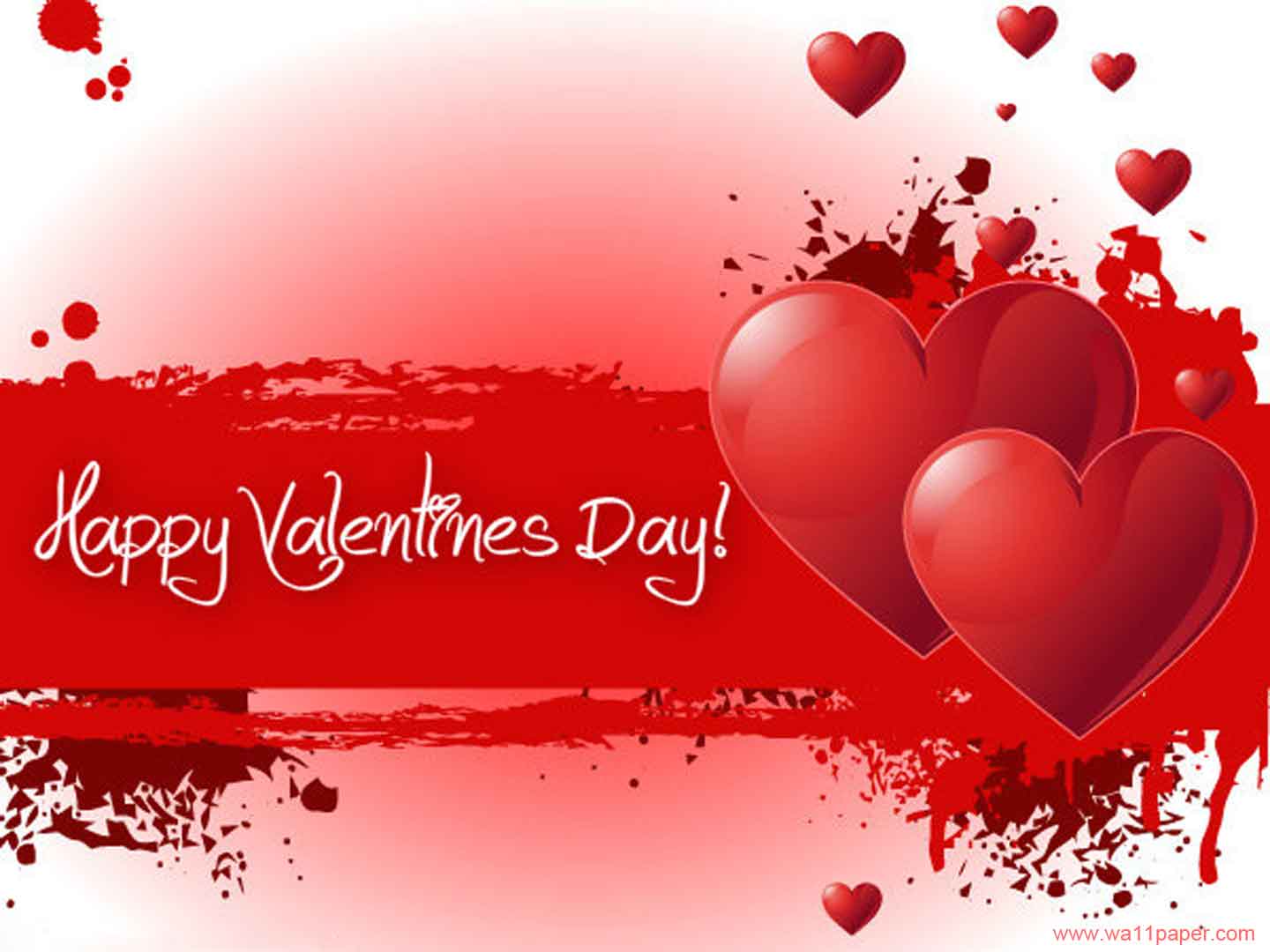 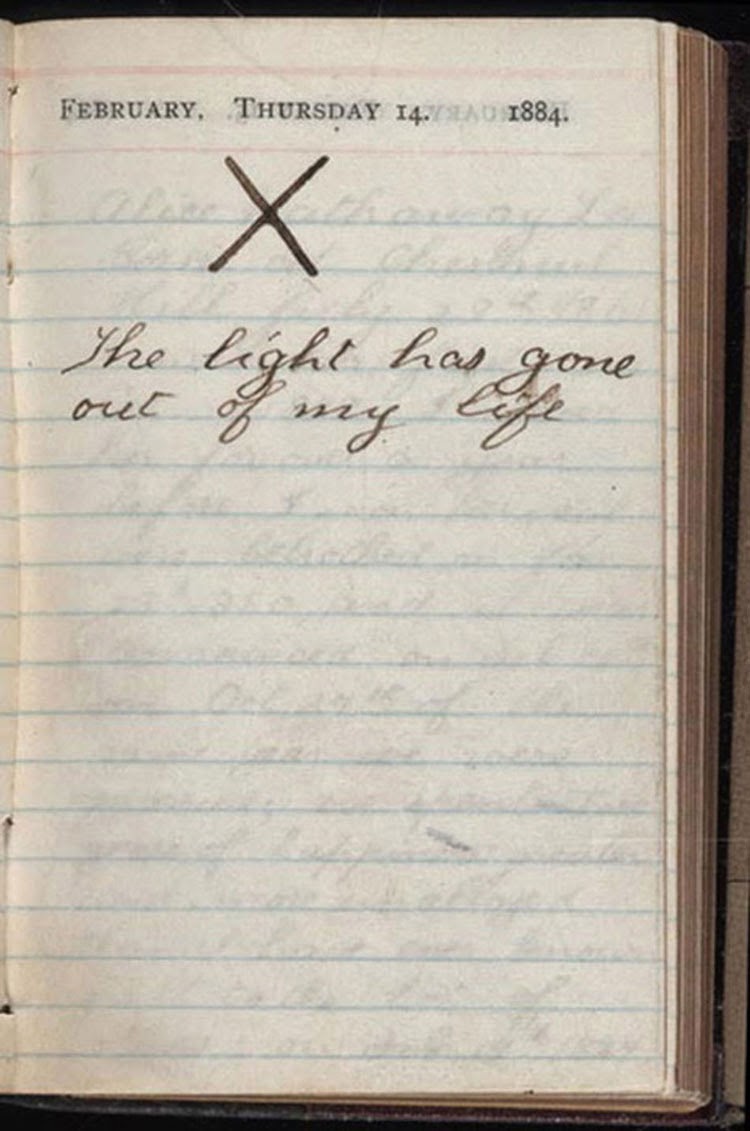 On February 14, 1884, Theodore Roosevelt received a terrible news, his wife and mother died within hours of one another in the Roosevelt house in New York City. His mother, age 50, succumbed to typhus, and his wife Alice died at the age of 22 giving birth to her namesake. The following diary entries lovingly describe his courtship, wedding, happiness in marriage, and his grief over the death of his wife Alice. In his ever-present pocket diary on February 14, 1884, Theodore Roosevelt simply wrote an “X” above one striking sentence: “The light has gone out of my life“

Roosevelt had been called by telegram back to New York City from Albany where he was a New York State Assemblyman. The concern was his mother’s fading health. Alice had just given birth to a baby girl two days earlier. But by the time Theodore reached his home at 6 West Fifty-seventh street, Alice’s condition had taken a serious downward turn. He was greeted at the door by his brother, Elliott, who ominously told him that “there is a curse on this house”.

And so it seemed. Roosevelt’s not yet 50-year-old mother, Mittie, was downstairs burning up with a fever from typhoid. And upstairs, his beloved Alice, scarcely able to recognize him was dying of undiagnosed Bright’s disease. Alice died two days after their daughter was born from an undiagnosed case of kidney failure (in those days called Bright’s disease), which had been masked by the pregnancy. His mother Mittie died of typhoid fever on the same day, at 3:00 am, some eleven hours earlier, in the same house

Since he first cast his eyes upon Alice’s face in 1878, Theodore Roosevelt had filled pages of his diary by writing about her nearly as often as he thought about her. He noted the simplest expressions, the smallest acts of recognition, the quietest smiles, the loudest silences, and every action that resulted in a memory that they could replay again-and-again in the future that they had planned together. 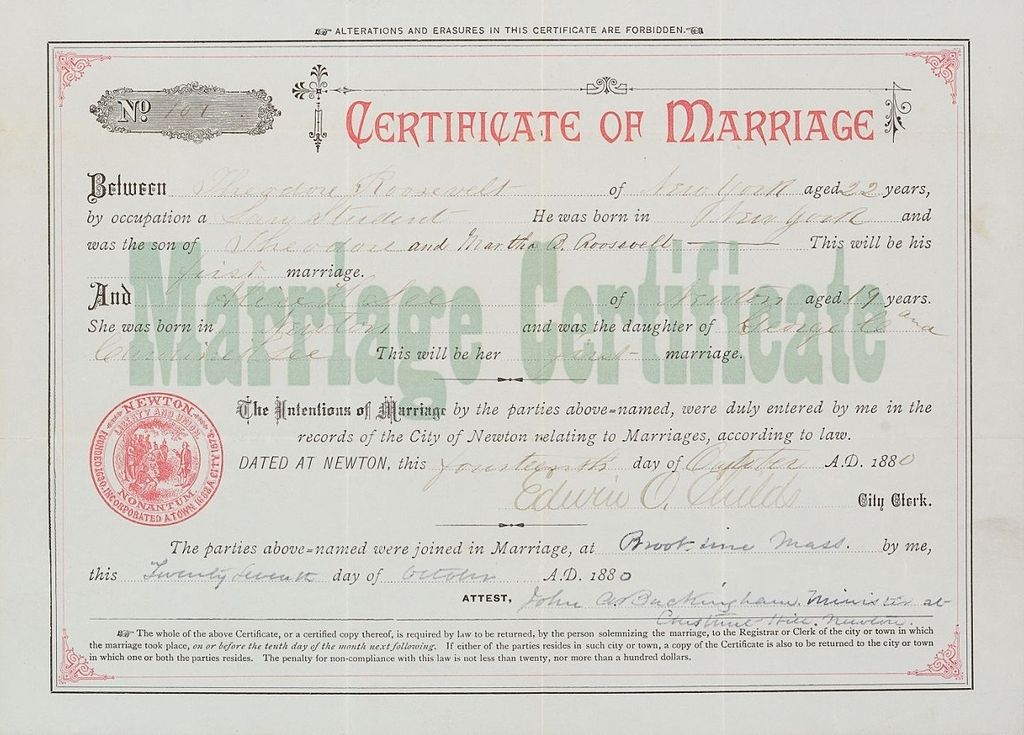 After his wife died, Roosevelt not only never spoke her name again, but never allowed anyone else to speak her name in his presence. That included their daughter, Alice Longworth Roosevelt, who never heard her father speak her mother’s name. His belief was, and he told this to a friend who also lost his wife, that the pain had to be buried as deep inside as possible or it would destroy you.

In a short, privately published tribute to Alice, Roosevelt wrote:

She was beautiful in face and form, and lovelier still in spirit; As a flower she grew, and as a fair young flower she died. Her life had been always in the sunshine; there had never come to her a single sorrow; and none ever knew her who did not love and revere her for the bright, sunny temper and her saintly unselfishness. Fair, pure, and joyous as a maiden; loving, tender, and happy. As a young wife; when she had just become a mother, when her life seemed to be just begun, and when the years seemed so bright before her—then, by a strange and terrible fate, death came to her. And when my heart’s dearest died, the light went from my life forever. 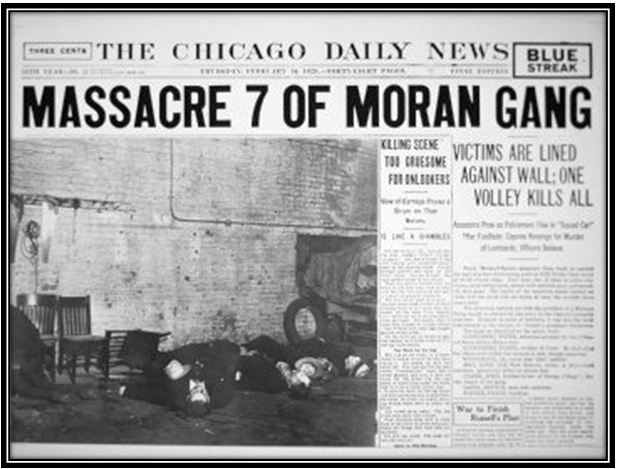 Al Capone had arranged for Chicago mobster George “Bugs” Moran and most of his North Side Gang to be eliminated on February 14, 1929. The plan, probably devised by Capone’s henchman “Machine Gun” Jack McGurn, was simple and deviously clever, but Capone’s primary target escaped. 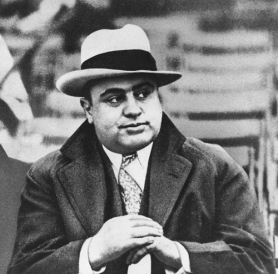 **ADVANCE FOR SUNDAY, JAN. 28 – FILE** Chicago mobster Al Capone is seen at a football game in Chicago on Jan. 19, 1931. Sixty years after Capone’s death, the world’s most famous gangster still draws a crowd in Chicago and visitors from all over the world come to search for anything Capone, who died Jan. 25, 1947. (AP Photo/File) 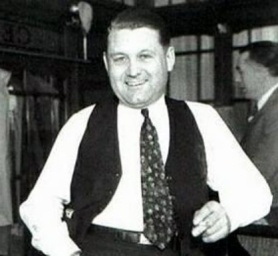 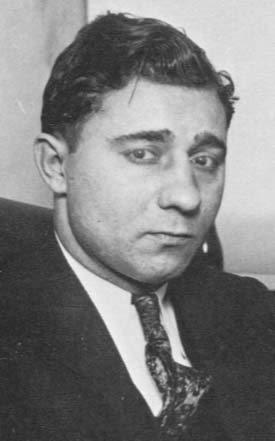 A bootlegger loyal to Capone would draw Moran and his gang to a warehouse under the pretense that they would be receiving a shipment of smuggled whiskey for a price that proved too good to be true. The delivery was set for a red brick warehouse at 2122 North Clark Street in Chicago at 10:30 a.m. on Valentine’s Day.

Capone arranged to distance himself from the assassinations by spending time at his home in Miami while the heinous act was committed. 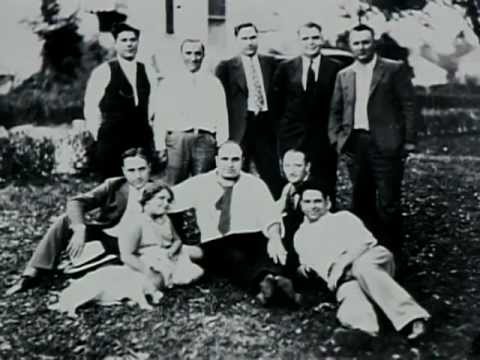 That snowy morning, a group of Moran’s men waited for Bugs Moran at the warehouse. Among them were Jon May, an auto mechanic hired by Moran; Frank and Pete Gusenburg, who had previously tried to murder Machine Gun Jack McGurn; James Clark, Moran’s brother-in-law; and Reinhardt Schwimmer, a young optometrist who often hung around for the thrill of sharing company with gangsters. Moran happened to be running a bit late.

When Moran’s car turned the corner onto North Clarke, he and his lackeys, Willy Marks and Ted Newbury, spotted a police wagon rolling up to the warehouse. Figuring it was a bust he watched as five men—including three dressed in police uniforms—entered the warehouse. With the arrival of the “cops,” Moran and Co. scrammed.

Inside the warehouse, Moran’s men were confronted by the hit men disguised as policemen. Assuming it was a routine bust, they followed instructions as they were ordered to line up against the wall. The hit men then opened fire with Thompson submachine guns, killing six of the seven men immediately. Despite 22 bullet wounds, Frank Gusenberg survived the attack but died after arriving at Alexian Brothers Hospital. 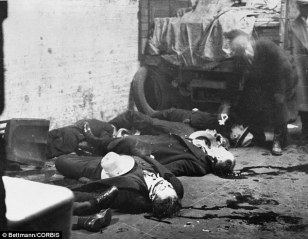 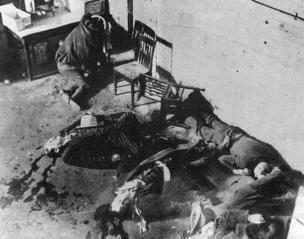 After the attack, the uniformed perpetrators marched their plain-clothed accomplices out the front door with their hands raised, just in case anyone was watching. Capone’s hit men piled into the police wagon and drove away.

The newspapers instantly picked up on the crime, dubbing it the “St. Valentine’s Day Massacre.” The story appeared on front pages around the country, making Capone a nationwide celebrity. While Capone seemed to revel in his new fame, he also had to deal with the new level of attention from federal law enforcement officials.

George “Bugs” Moran knew Capone wanted him killed and pegged the crime on him right away. “Only Capone kills like that,” he said, though authorities had no concrete evidence. Capone was in Florida and his henchman McGurn had an alibi of his own. No one was ever tried for this most spectacular slaying in mob history. 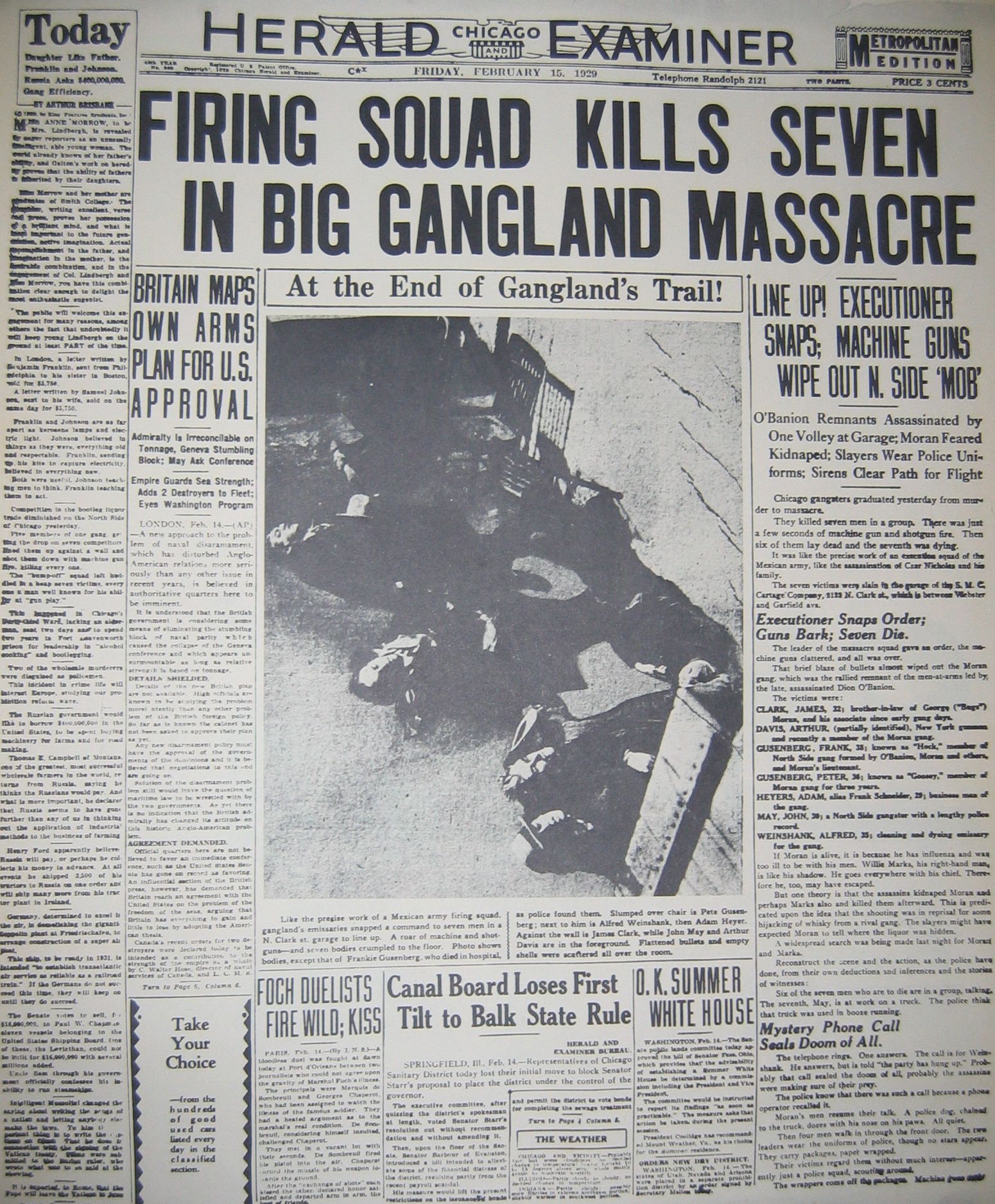