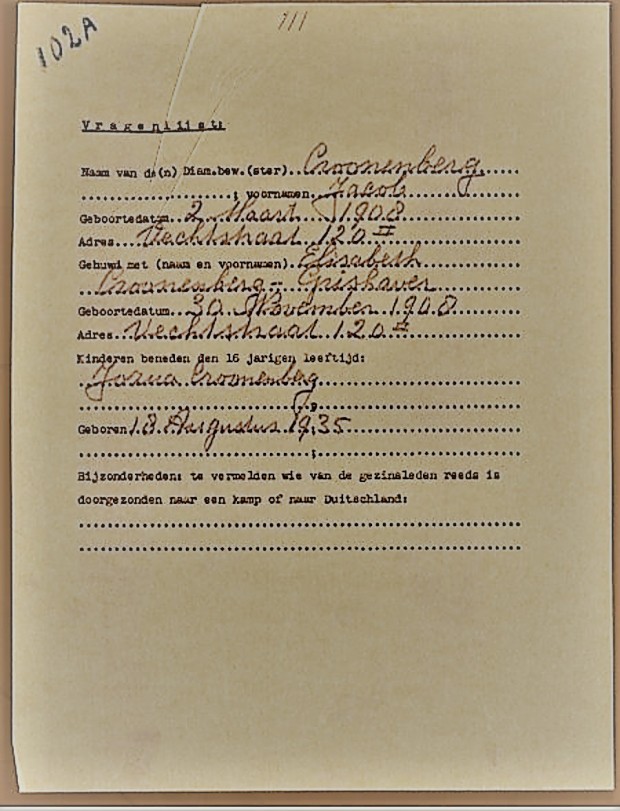 The biggest group of people who were murdered during the Holocaust were the Jews. An estimated 6 million were killed.

The number of 6 million should have really been zero, because none of these people had done anything wrong, They were only killed because they were Jewish or had been Jewish, there was no other reason.

This may sound strange coming from somebody who writes a lot about the Holocaust but I really don’t care about that number of 6 million. It has become a statistic which often has been disputed and manipulated by people who want to use it for a political agenda. Personally I believe the number is higher.

What I am interested in ,is the personal individual stories.Because that is what each of all the 6 million people were, all unique individual. 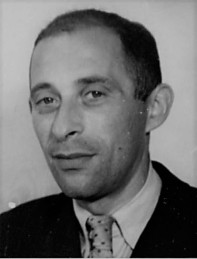 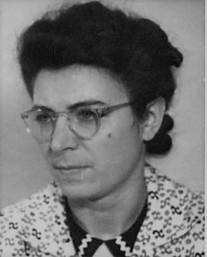 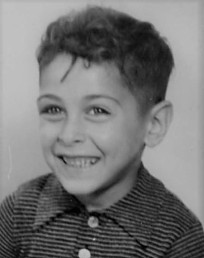 Jacob was a Diamond worker in Amsterdam. He reached the age of 35 and was killed on June 11, 1943 in Sobibor.

Elisabeth was a housewife or homemaker in Amsterdam , he reached the age of 34 and was killed on June 11,  1943 in Sobibor.

The lovely smiley boy Jozua, was just that, a lovely beautiful smiley boy. When he was killed on June 11,1943 he had only been 7.

The document at the start of the blog is a questionnaire which was filled in by I presume Jacob.

It asks “Specifics of family members who have already been sent to a camp or to Germany” It is clearly proof that the authorities( in this case Dutch authorities)were well aware of the camps.

In the case of the Croonenbergs there are only 5 numbers that matter. The umber 1 as in one family. The number 3 as in three family members. The numbers,35,34 and 7 as in their ages when they were killed. We should not get distracted by statistics, we should keep the memory of the victims personal. 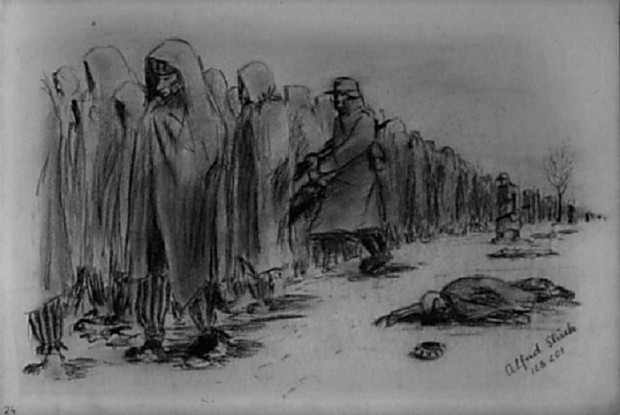 Below are the estimated numbers of the Holocaust victims. The keyword is estimated because an exact number is not known.

I have no evidence of this but it only makes sense that this would be the case.

Serb civilians (on the territory of Croatia, Bosnia and Herzegovina):312,000

People with disabilities living in institutions: 250,000

Then there are an undetermined number of political activists, Spanish republican soldiers,Esperanto speakers,freemasons.

But those numbers on their own really mean nothing. They are merely statistics. What we need to remember is not so much the numbers but that there is a story behind each of those millions of deaths. 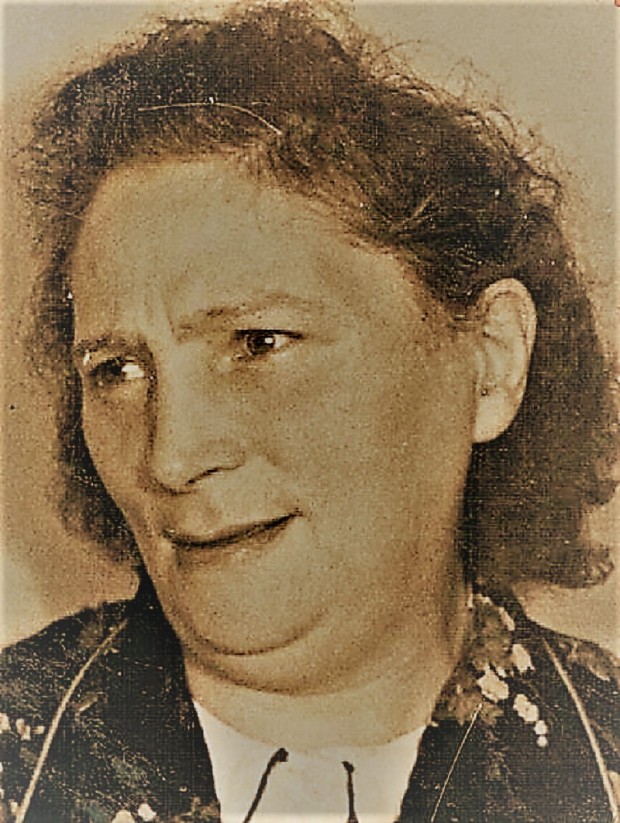 She was born in Rotterdam on January 28,1895 in a family of 8 children , one of her siblings died at birth.Three other siblings died before World War 2. Sofia was killed on 23 April 1943 in Sobibor, aged 48.

Her brother Leo was blind but survived the war, he died on May 4th,1970.

We should never ever forget the stories behind all the victims and when we know their stories or part of it we have to tell those stories, 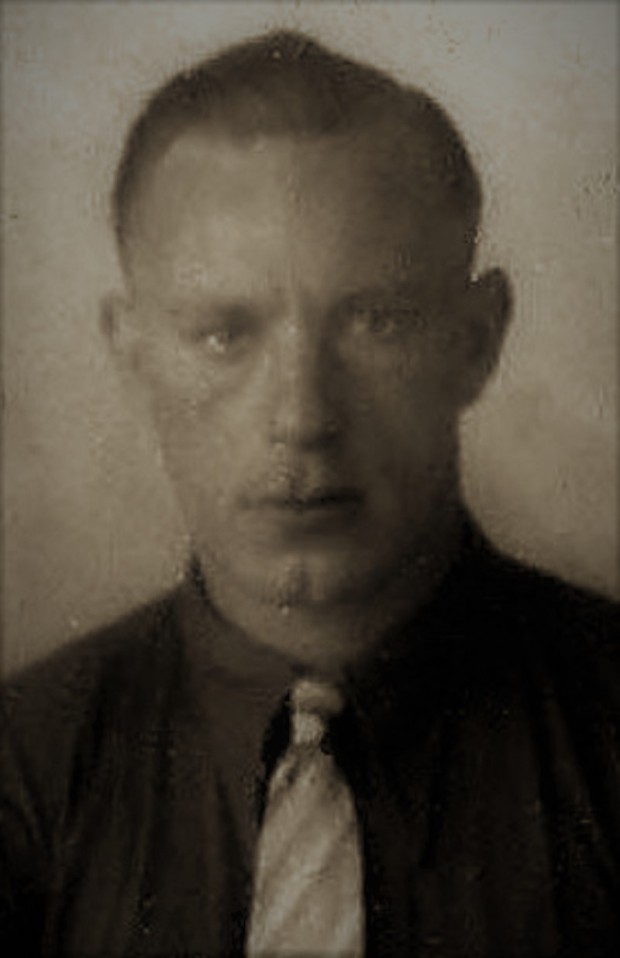 There are so many stories and accounts written about the Holocaust. Often in horrific detail and concerning large numbers.

When you look at the numbers, be it 6 million Jews and another 5 million or so  of Roma, Homosexuals, Disabled and other groups, the numbers are staggering. However they are also nearly impossible to fathom for most people.

And this might sound harsh and strange but it is a reality that it doesn’t matter if it is 6 million, 11 million or 15 million. When you talk about those numbers they become statistics or raw data.

The human mind just can not cope with something on that scale and magnitude and soon it gets desensitized to the numbers. It is human nature.

Does this mean we have to forget about all the victims and just move on? The answer is threefold, NEVER,NEVER,NEVER.

The Holocaust can never be allowed to happen again, I found the best way  to bring the message home to people is by making the stories personal, Make people identify with the victims, as a virtual mirror so to speak, because reality is it could have been anyone.

Here are some numbers which are statistics but they belong to a man, a man who does not look that much different then I.  It is I am older and a bit bigger but other then that..

7 September 1903-the day he was born in Amsterdam

1926 the year he married his wife Klara Markus

6- the number of children the couple had

1942- the year he was betrayed in Bergen op Zoom

1- the number of his children that survived the Holocaust.

All of the millions deserve to be remembered but I believe the best way to do it is by 1 victim or 1 family at a time.

It is hard work but it is all our duty as human beings to do so.For each one of those millions deserve to be remembered. 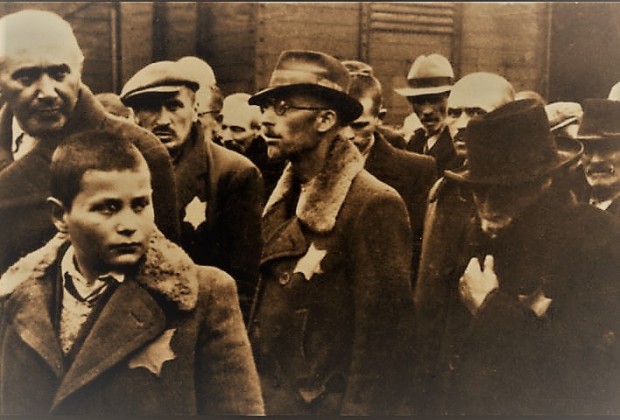 I have to make this clear upfront, some of this blog is not based on facts I can proof. It is purely based on my presumptions but also a good dose of common sense,for lack of a better description.

The United States Holocaust Memorial Museum estimates that the total of deaths during the Holocaust is 17 Mullion, 6 million of which were Jewish. The second biggest group deaths were Soviet citizens 4.5 million.Followed by 2.8–3.3 million Soviet prisoners of war and 1.8–3 million Polish followed by several other groups which the Nazis deemed subhuman.

The above numbers are estimates,verified and  compiled by the USHMM and also other Holocaust organisations.

But I believe the overall number must have been higher. In those stats are not included the number of  the unborn children. Many pregnant women were killed immediately after arriving at the camps. Or otherwise they were forced to have abortions.And sometimes babies were killed straight after birth.

Additionally not all the victims of the einsatz gruppen were registered either. Nor is taken in consideration the number of survivors who committed suicide after the war,because of survivors guilt or otherwise.

One thing I do know for certain though. There are many people who just can’t fathom the amount of victims and great numbers like that become statistics.

The statistics become more of a mathematical equation. Merely a scientific footnote and as times passes the human stories are forgotten. All that is spoken about is the Holocaust statistics.

But these victims deserve better, they are not a statistic but a human being who once were flesh and blood.

Human beings like the 2 sisters Eva and Leah(Liane) Münzer. 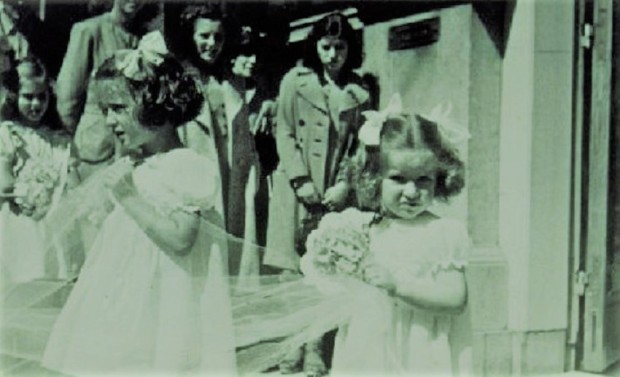 In February 1944 they were sent to Auschwitz and were killed three days after arrival. They had been in hiding with a friend of a neighbour. But as a result from a domestic dispute the girls were betrayed. The husband of the woman ,in whose house they were hiding, denounced her and the girls to the authorities. All three were arrested and sent to Westerbork. On February 8, 1944 eight year old Eva and six year old Leah were deported to Auschwitz where they were killed three days later

On the other hand there was their baby brother Alfred who survived the war, but nearly wasn’t born. 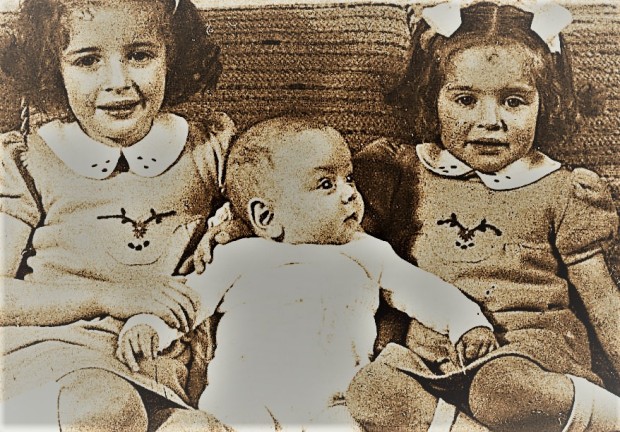 His parents  were from Galicia but  moved to the Netherlands in the early 1930’s.Alfred was born November 23, 1941. But his mother’s obstetrician had urged her to have an abortion. “It would be immoral,” to bring another Jewish life into the world.” he told her. But his Mother Gisele did have Alfred and he was rescued by an Indonesian family living in the Netherlands, Indonesia was a Dutch colony at the time.

Only Alfred and his Mother survived.