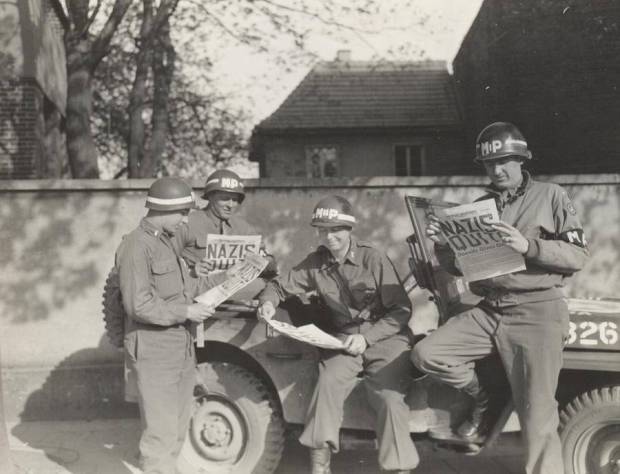 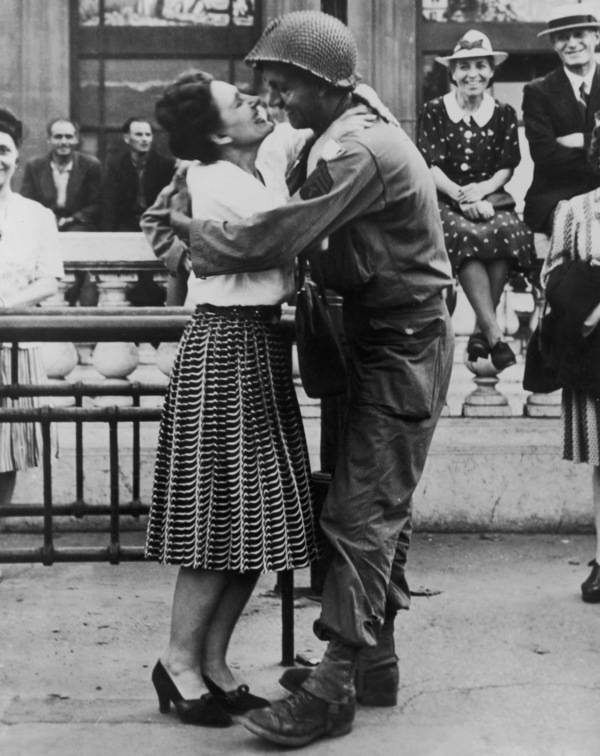 On September 2, 1945, representatives from the Japanese government and Allied forces assembled aboard the USS Missouri in Tokyo Bay to sign the Japanese Instrument of Surrender, which effectively ended World War II.

The document was prepared by the U.S. War Department and approved by President Harry S. Truman. Eight short paragraphs formalized the “unconditional surrender to the Allied Powers of the Japanese Imperial General Headquarters and of all Japanese armed forces and all armed forces under Japanese control wherever situated.” The Japanese signatories of the surrender were Foreign Minister Mamoru Shigemitsu and General Yoshijiro Umezu, Chief of the Army General Staff, and acting as Supreme Commander of the Allied Forces General Douglas MacArthur accepted their surrender.

The formal ceremony was witnessed by delegates from the other Allied nations, including China, the United Kingdom, the USSR, France, Australia, Canada, the Netherlands and New Zealand. 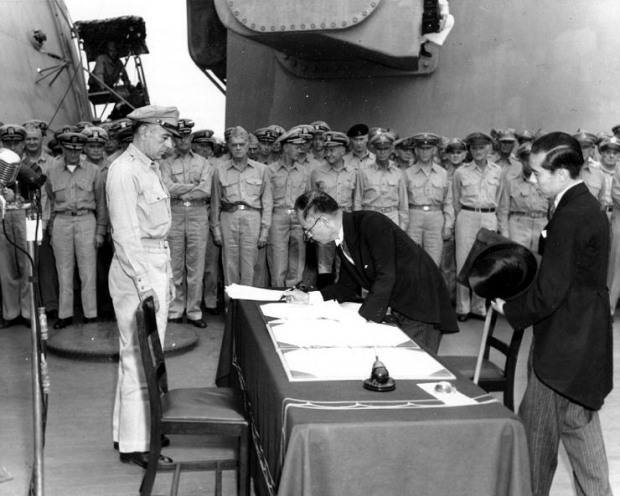 The surrender came after almost two years of continuous defeats for the Imperial Japanese Army, compounded by the devastating atomic bombing of Hiroshima and Nagasaki in early August 1945. Word of the Japanese surrender became public on August 14, when President Truman addressed the nation, and August 15 was marked by victory celebrations across the world.

On September 7, the Japanese Surrender Instruments were presented to President Truman in Washington, DC, and in less than a week later, they were put on public display in the Rotunda of the National Archives, where the the Declaration of Independence, the U.S. Constitution and the Bill of Rights reside today.

Below are some further impressions of that day 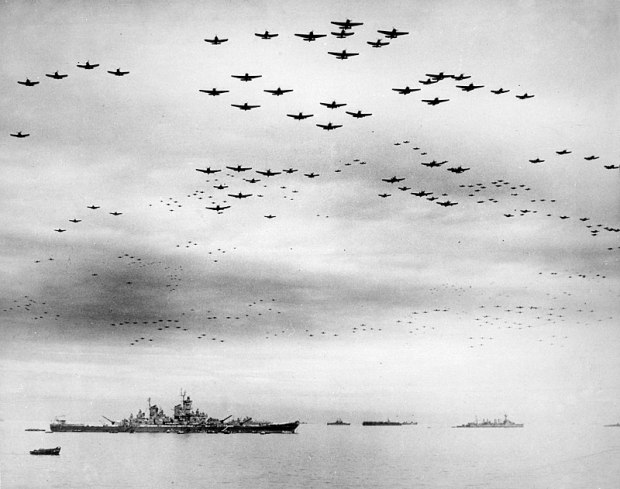 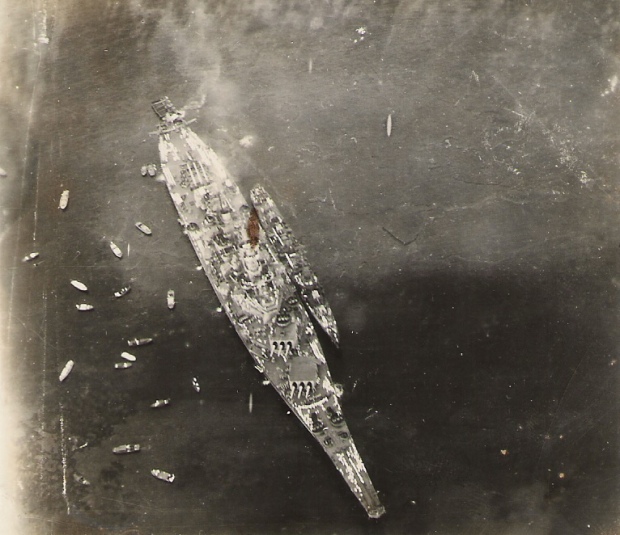 The Jewel Voice Broadcast  was the radio broadcast in which Japanese Emperor Hirohito  read out the Imperial Rescript on the Termination of the War (, announcing to the Japanese people that the Japanese Government had accepted the Potsdam Declaration demanding the unconditional surrender of the Japanese military at the end of World War II. This speech was broadcast at noon Japan Standard Time on August 15, 1945, after the Battle of Okinawa, the atomic bombings of Hiroshima and Nagasaki, and the Soviet invasion of Manchuria.

The speech was probably the first time that an Emperor of Japan had spoken (albeit via a phonograph record) to the common people. It was delivered in the formal, Classical Japanese that few ordinary people could easily understand. It made no direct reference to a surrender of Japan, instead stating that the government had been instructed to accept the terms of the Potsdam Declaration fully. This created confusion in the minds of many listeners who were not sure whether Japan had surrendered. The poor audio quality of the radio broadcast, as well as the formal courtly language in which the speech was composed, worsened the confusion. A digitally remastered version of the broadcast was released on 30 June 2015.

The speech was not broadcast directly, but was replayed from a phonograph recording made in the Tokyo Imperial Palace on either August 13 or 14, 1945. Many elements of the Imperial Japanese Army were extremely opposed to the idea that Hirohito was going to end the war, as they believed that this was dishonourable.

TO OUR GOOD AND LOYAL SUBJECTS:

After pondering deeply the general trends of the world and the actual conditions obtaining in our empire today, We have decided to effect a settlement of the present situation by resorting to an extraordinary measure.

We have ordered our government to communicate to the governments of the United States, Great Britain, China and the Soviet Union that our empire accepts the provisions of their joint declaration.[6]

To strive for the common prosperity and happiness of all nations as well as the security and well-being of our subjects is the solemn obligation which has been handed down by our imperial ancestors and which lies close to our heart.

Indeed, we declared war on America and Britain out of our sincere desire to ensure Japan’s self-preservation and the stabilization of East Asia, it being far from our thought either to infringe upon the sovereignty of other nations or to embark upon territorial aggrandizement.

But now the war has lasted for nearly four years. Despite the best that has been done by everyone – the gallant fighting of the military and naval forces, the diligence and assiduity of our servants of the state, and the devoted service of our one hundred million people – the war situation has developed not necessarily to Japan’s advantage, while the general trends of the world have all turned against her interest.

Moreover, the enemy has begun to employ a new and most cruel bomb, the power of which to do damage is, indeed, incalculable, taking the toll of many innocent lives. Should we continue to fight, not only would it result in an ultimate collapse and obliteration of the Japanese nation, but also it would lead to the total extinction of human civilization.

Such being the case, how are we to save the millions of our subjects, or to atone ourselves before the hallowed spirits of our imperial ancestors? This is the reason why we have ordered the acceptance of the provisions of the joint declaration of the powers.

We cannot but express the deepest sense of regret to our allied nations of East Asia, who have consistently cooperated with the Empire towards the emancipation of East Asia.

The thought of those officers and men as well as others who have fallen in the fields of battle, those who died at their posts of duty, or those who met with untimely death and all their bereaved families, pains our heart night and day.

The welfare of the wounded and the war-sufferers, and of those who have lost their homes and livelihood, are the objects of our profound solicitude.

The hardships and sufferings to which our nation is to be subjected hereafter will be certainly great. We are keenly aware of the inmost feelings of all of you, our subjects. However, it is according to the dictates of time and fate that We have resolved to pave the way for a grand peace for all the generations to come by enduring the unendurable and suffering what is insufferable. 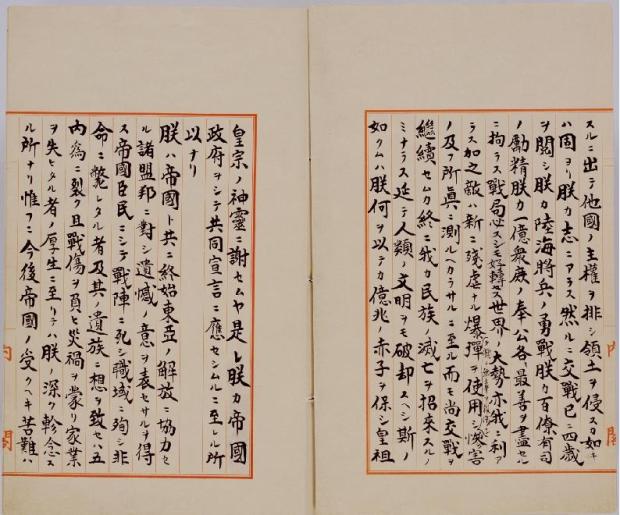 Having been able to safeguard and maintain the Kokutai, We are always with you, our good and loyal subjects, relying upon your sincerity and integrity.

Beware most strictly of any outbursts of emotion which may engender needless complications, or any fraternal contention and strife which may create confusion, lead you astray and cause you to lose the confidence of the world.

Let the entire nation continue as one family from generation to generation, ever firm in its faith in the imperishability of its sacred land, and mindful of its heavy burden of responsibility, and of the long road before it.

Unite your total strength, to be devoted to construction for the future. Cultivate the ways of rectitude, foster nobility of spirit, and work with resolution – so that you may enhance the innate glory of the imperial state and keep pace with the progress of the world.

Dozens of F4U Corsair and F6F Hellcat fighter planes fly in formation over the USS Missouri, while the surrender ceremonies to end World War II take place aboard the U.S. Navy battleship, on September 2, 1945.