Here are just some examples of people who were awarded the title “person of the year” by Time magazine. As you can see that doesn’t always equate of having a positive impact in the world.

Above : Pierre Laval, Man of the Year | Jan. 4, 1932. Had been a FrEnch politician and had held the role of prime miniters. During WWII collaborated withe the Nazi regime, while he held positions in the Vichy government. Was executed in 1949 for his role in WWII

Adolph Hitler, Man of the Year | Jan. 2, 1939. There are 2 covers for that edition . There is another one with Hitler himself , displaying a Swastika on his arm. 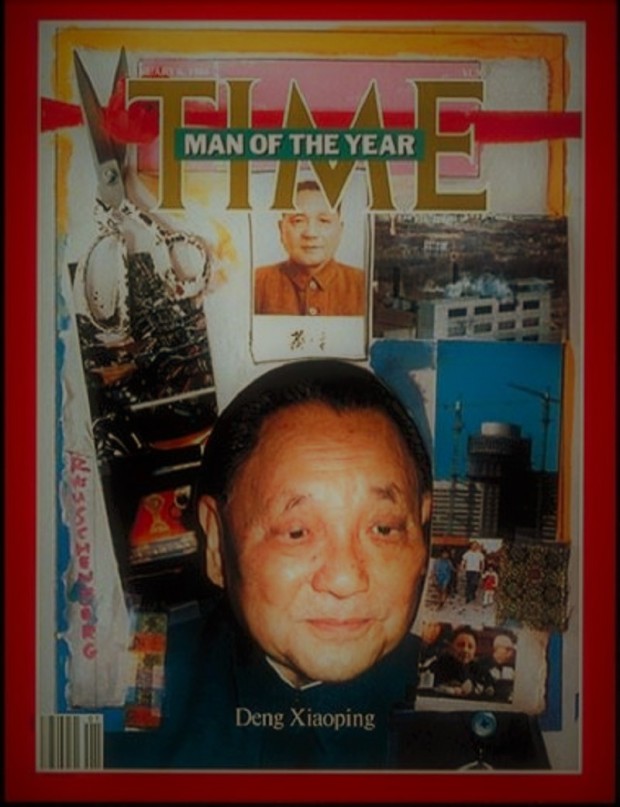 Ayatullah Khomeini, Man of the Year | Jan. 7, 1980. Supreme Leader of the Islamic Republic of Iran.

To be honest I don’t know why anyone would think there is anything honorable in receiving the title. I would not want to be associated with any of these men in any way or shape or  form.

Before you start thinking that this will be a blog about Punk bands like the Sex Pistols singing about WWII, you’d be wrong. In fact it has nothing to do with Punk music but more about Jazz.

I am referring to Punk as a rebellion against the establishment. During WWII there were 2 groups very similar in how they rebelled against the Nazi regime, the Swingjugend in Germany and the Zazou in France. Unlike the Punk movement in the 70’s, the Zazou and the Swingjugend could actually risk their lives or be sent to a concentration camp for their rebellion. 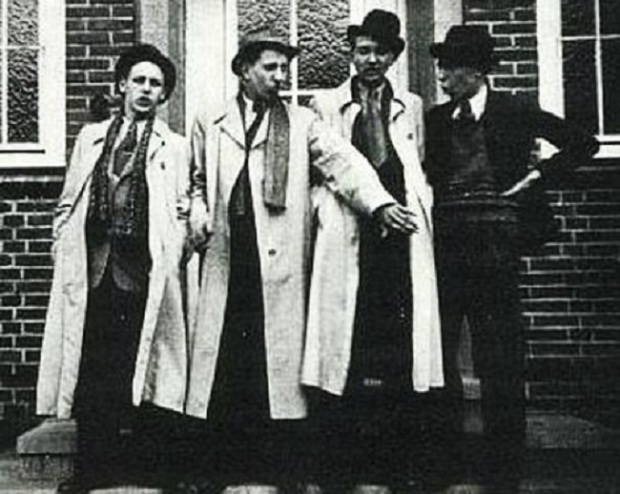 As the Nazi Party took power in Germany in 1933, a complete crackdown on all “subversive” elements took hold. Having dealt with his political opponents in the years prior to his rise to the chancellorship, Hitler intended to finish the job by eradicating all potential opposition.

But in the schools and out on the streets, a silent flame tingled. Teenagers were rejecting the strict militarism and code of behavior bestowed by the Nazi Party through its youth organizations―the Hitler Youth and the League of German Girls 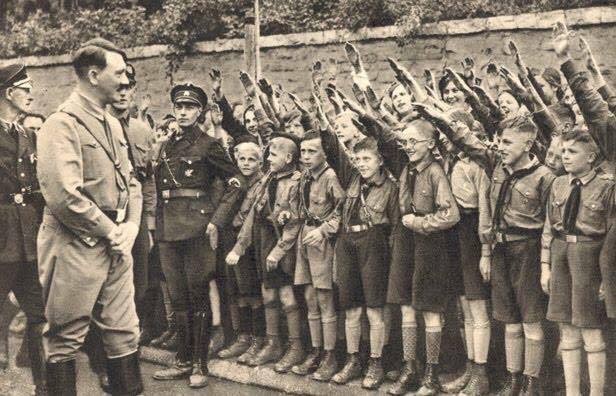 This proved to be unsuccessful, because instead of embracing the Hitler Youth pastimes, city girls and boys crowded the swing dance joints.[2] This seemed to be the case particularly in the town of Hamburg, where the swing scene was huge.

The Swingjugend rejected the Nazi state, above all because of its ideology and uniformity, its militarism, the ‘Führer principle’ and the leveling Volksgemeinschaft (people’s community). They experienced a massive restriction of their personal freedom. They rebelled against all this with jazz and swing, which stood for a love of life, self-determination, non-conformism, freedom, independence, liberalism, and internationalism.

Though they were not an organized political-opposition organization, the whole culture of the Swing Kids evolved into a non-violent refusal of the civil order and culture of National Socialism.

From a paper of the National Youth Leader:

The members of the Swing youth oppose today’s Germany and its police, the Party and its policy, the Hitlerjugend, work and military service, and are opposed, or at least indifferent, to the ongoing war. They see the mechanisms of National Socialism as a “mass obligation”. The greatest adventure of all times leaves them indifferent; much to the contrary, they long for everything that is not German, but English.

From 1941, the violent repression by the Gestapo and the Hitlerjugend shaped the political spirit of the swing youth. Also, by police order, people under 21 were forbidden to go to dance bars, which encouraged the movement to seek its survival by going underground. 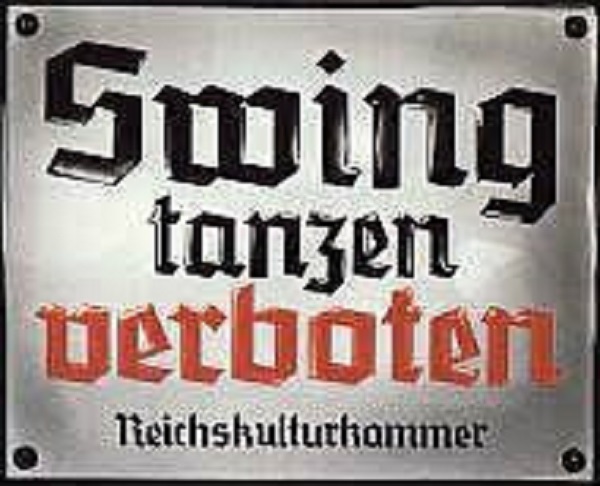 The Swing Kids of Hamburg at some point had contacts with another famous resistance movement, when three members of the White Rose (German: Weiße Rose) developed a sympathy for the Swing Kids. No formal cooperation arose, though these contacts were later used by the Volksgerichtshof (“People’s Court”) to accuse some Swing Kids of anarchist propaganda and sabotage of the armed forces. The consequent trial, death sentences and executions were averted by the end of the war.

On 18 August 1941, in a brutal police operation, over 300 Swingjugend were arrested. The measures against them ranged from cutting their hair and sending them back to school under close monitoring, to the deportation of the leaders to concentration camps. The boys went to the Moringen concentration camp while the girls were sent to Ravensbruck.[10]

This mass arrest encouraged the youth to further their political consciousness and opposition to National Socialism. They started to distribute anti-fascist propaganda. In January 1943, Günter Discher, as one of the ringleaders of the Swing Kids, was deported to the youth concentration camp of Moringen.

On 2 January 1942, Heinrich Himmler wrote to Reinhard Heydrich calling on him to clamp down on the ringleaders of the swing movement, recommending a few years in a concentration camp with beatings and forced labor:

The crackdown soon followed: clubs were raided, and participants were hauled off to camps.

In France a similar movement like Germany’s Swingjugend arose by the name Zazou.The zazous were a subculture in France during World War II. They were young people expressing their individuality by wearing big or garish clothing (similar to the zoot suit fashion in America a few years before).

On March 27 1942, France’s Vichy government issued the barbershop decree, demanding that barbers collect cut hair and donate it to the war effort to make slippers and sweaters. The rebellious Zazous refused and grew their hair long. The Zazous were directly inspired by jazz and swing music. A healthy black jazz scene had sprung up in Montmartre in the inter-war years. Their name  was inspired by a line in a song – Zah Zuh Zah – by Cab Calloway 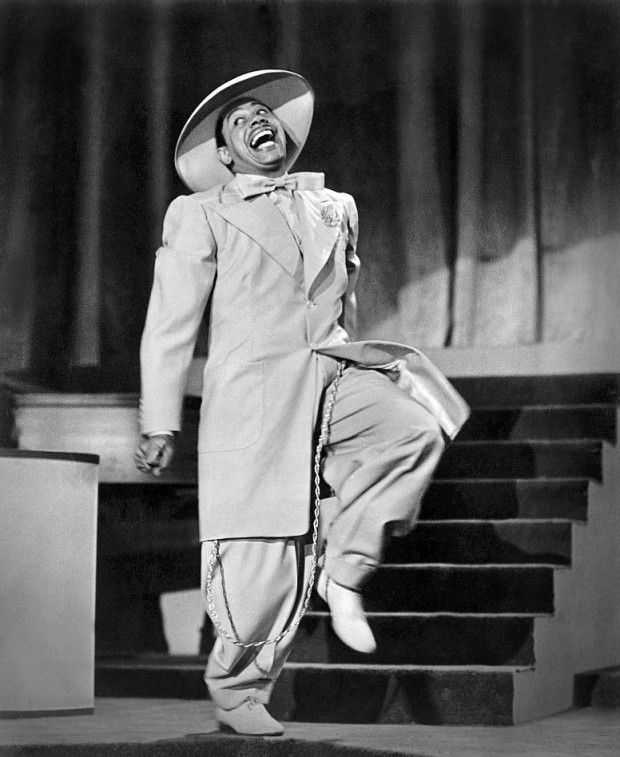 Vichy had started ‘Youth Worksites’ in July 1940, in what Zazous perceived as an attempt to indoctrinate French youth.  The Vichy regime was very concerned about the education, moral fibre and productivity of French youth. In 1940 a Ministry of Youth was established. They saw the Zazous as a rival and dangerous influence on youth. 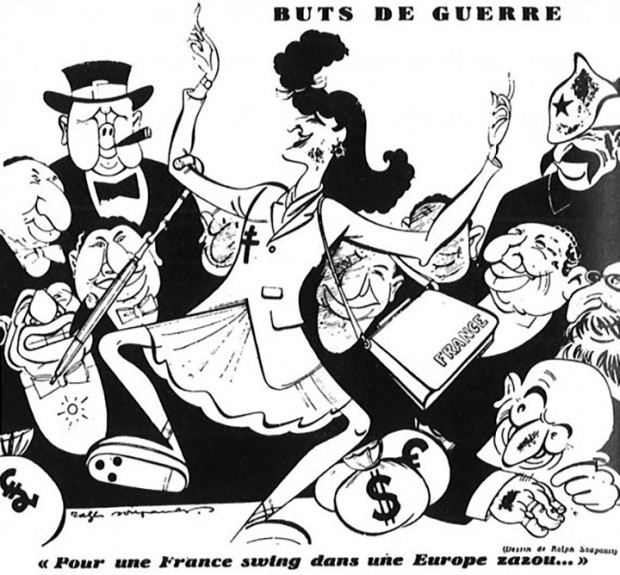 The Vichy papers deplored the moral turpitude and decadence that was affecting French morality. Zazous were seen as work-shy, egotistical and Judeo-Gaullist shirkers.

By 1942 the Vichy regime realised that the national revival that they hoped would be carried out by young people under their guidance was seriously affected by widespread rejection of the patriotism, work ethic, self-denial, asceticism and masculinity this called for.

Soon, round-ups began in bars and Zazous were beaten on the street. They became Enemy Number One of the fascist youth organisations, Jeunesse Populaire Française. “Scalp the Zazous!” became their slogan. Squads of young JPF fascists armed with hairclippers attacked Zazous. Many were arrested and sent to the countryside to work on the harvest.

At this point the Zazous went underground, holing up in their dance halls and basement clubs.

Though they did not suffer like their contemporaries in Germany, nevertheless, in a society of widespread complicity and acquiescence, their stand was courageous and trail-blazing.

Special thank you to Norman Stone who pointed me to the story of the Zazou.

France had always been a colonial power therefore there would be many French Jewish citizens living and working  in the North African colonies like Algeria,Tunisia and Morocco. 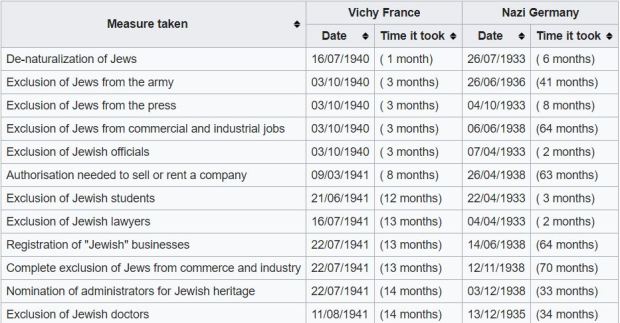 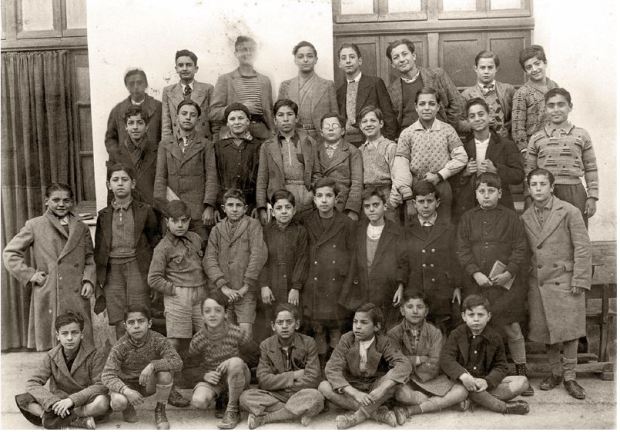 One of the first moves of the pro-German Vichy regime was to revoke the effects of the Crémieux Decree, thereby abolishing French citizenship for Algerian Jews, affecting some 110,000 Algerians. Under Admiral Darlan and General Giraud the antisemitic legislation was applied more severely in Algeria than France itself, under the pretext that it enabled greater equality between Muslims and Jews.

Philippe Pétain signed a bill to construct a trans-Saharan railway, which was to be built by prisoners of war and Jews.

Approximately 2,000 Algerian Jews were put into labor and concentration camps throughout Algeria, including the camps at Bedeau and Djelfa. Though the camps were not a Vichy innovation, the plan to construct a trans-Saharan railroad to serve coal mines across North Africa was an exclusively Vichy initiative. Work camps were set up for this purpose. Prisoners were forced to labor in difficult conditions, performing strenuous work, for ten hours each day. They were poorly fed and housed, and lived in terrible sanitary conditions. Tortures and atrocities were inflicted by the guards for the slightest breach of the rules; the internees were not treated as human beings. Many died from beatings; even more died from outbreaks of typhus or just from exhaustion and hunger.

The Algerian Jewish community survived due to the early Allied Liberation of Algeria in November 1942. 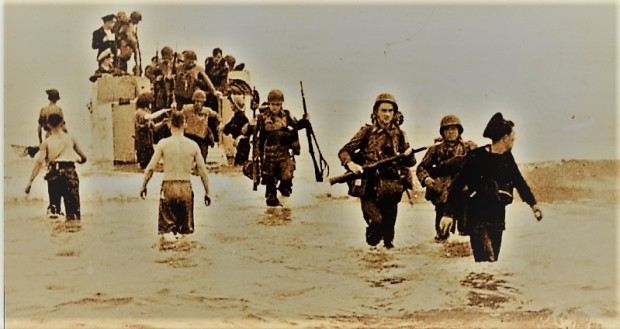 However, the Jews were not entirely “liberated.” It took until October of 1943 for all of the anti-Jewish laws to be cancelled and for the Jews of Algeria to be reinstated as citizens of France. Giraud  promulgated the cancellation of Vichy statutes on March 14, 1943, retained exceptionally the decree abolishing citizenship rights for Algerian Jews, in so far as he attributed France’s defeat to the Jews.[10] His decision was overruled, on appeal, by the CFLN( French Committee of National Liberation)in October of 1943.